If you follow international cuisine trends, and I’m assuming everyone does, you know that Peruvian cuisine has been at or near the top of the list for long enough to disqualify it as a trend.

In some regions of the U.S. we have some easily identifiable cuisine, Louisiana and New Mexico are two, but in the big picture—and I’m not talking about restaurants—we’re pretty simple folk. Ask me what the food is like in Wisconsin, where I’m from, and my answer would be something like, “Umm. Umm. Let me think. That’s a tough question. Bratwurst? Cheese curds? Beer? Does that count?” Ask a Peruvian that question and almost all of them will come up with an enthusiastic and detailed answer before I could spit out my first “Umm.”

There are a few reasons why Peruvian food is so easily explicable. It sounds contradictory, but one reason is it’s so diverse that just about any answer applies. Peruvian food has native Andean influences, but mixed in are Chinese, Japanese and African. One of the most well known and typical dishes, Lomo Saltado, originated in the uniquely Peruvian Chinese restaurants known as Chifas. Without the availability of the familiar ingredients from China, the use of local substitutes gave it a Peruvian twist.

Peru is blessed with the ability to grow, raise, or pluck out of the ocean just about anything you can eat. The country is nearly the size of Alaska and has 1,500 miles of Pacific coastline. Seafood is a big part of Peruvian cuisine. Tropical fruits grow in the Peruvian rainforest. Trendy superfood quinoa and thousands of varieties of potatoes grow in the altiplano. Happy cows eat lush green grass in the region of Cajamarca. Cuys, what we call Guinea pigs, can be raised and eaten anywhere. 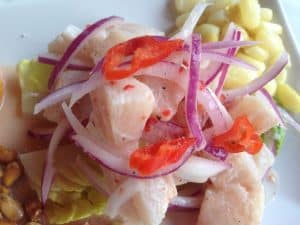 Ross gets to know his ceviche

Like the Chifas in Peru, many Peruvian restaurants in North American, particularly in smaller towns, struggle to source the ingredients necessary to recreate the authentic flavors of Peruvian food. Trotsky Barreto has gone to great lengths to solve that problem at Quechua, a new Peruvian restaurant off the plaza. He sources the all-important, ever-present ajís, what we call chiles, from an importer in California.

I lived in Peru twice. I eat Peruvian food cooked by my Peruvian wife every week. I’ve been to three different Peruvian restaurants run by international superstar chef Gaston Acurio. I can say with authority that the food prepared by chef Jose Ruiz at Quechua is authentic and delicious. The effort to use the genuine goods pays off, but you will pay a buck or two more than you would for a comparable dish at other restaurants. 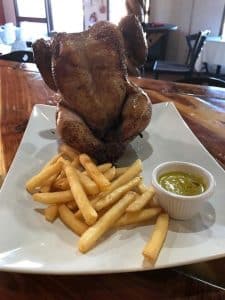 Quechua’s menu covers many the most popular Peruvian dishes: ceviche, seasoned with ají limo, ají de gallina, lomo saltado and arroz con mariscos. The chicha morada, a sweet drink made from purple corn, is made fresh every day from fresh ingredients. I’ve eaten enough times at Quechua with both Peruvians and non-Peruvians to have tried nearly every item on the menu. Peruvian friends rate every dish good or better. I agree.

Pollo a la brasa, a seasoned rotisserie chicken served with fries, warrants extra attention. Pollo a la brasa is not a complicated dish, but Peruvians hold it to a Top Chef or Chopped standard. Everyone’s a critic when they eat it. It can start heated family arguments. There are loads of pollo al la brasa joints in Peru. They’re where many Peruvians go in large groups or to have family celebrations. The third Sunday of July is national Pollo a la Brasa Day. This chicken is serious stuff. The polla a la brasa at Quechua is the genuine article. Take your family there and argue about how good it is.

Quechua is Trotsky, Kenji Abe, chef Jose and a number of friendly family members. Their service is warm and accommodating. Abe says the reception from Peruvian food newbies has been positive. The goal was to add some variety to the Taos restaurant scene.

“We opened the restaurant to introduce Peruvian food to the local community,” says Abe.

To build on that introduction, they plan on having events like a ceviche night, where customers can learn how to make ceviche. In the summer, there will be Sunday buffets with all off-menu items to give people an even broader knowledge of Peruvian cuisine.

Quechua is located upstairs at 112 Paseo del Pueblo Sur, a few doors down from the Gorge. You may know it as the former space of El Camino. They’re open from lunch through dinner and cash only. If you’re familiar with New Mexico’s silly liquor laws, you’ll know beer and wine will have to wait for a few months.

Check Quechua out on Facebook To learn about more menu items, See smiling faces and llamas!

All Photos courtesy of Ross Burns and Quechua