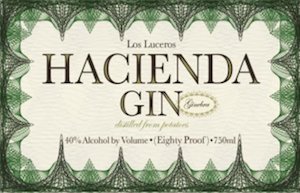 Gin has a long history, dating back to 17th century Holland, when oil of juniper berries was first mixed with grain alcohol and called “genever,” (juniper in French). British soldiers fighting in Europe caught a taste and grew so fond of it, in no time it was the preferred drink of Great Britain.

Dry Gin has a panoply of spices added that differ from producer to producer, but generally consist of such exotic ingredients as: cardamom from Sri Lanka, cassia bark from Vietnam, orange peel from Spain and coriander seed from the Czech Republic.

The outset of this 21st century has witnessed artisanal American Gins explode on the scene in grand fashion, oftentimes being preferred over their British counterparts.

The Fifty Best recently held their international Gin tasting, the largest in the world to date, where a panel of nineteen experts blind-tasted forty-four Gins.

The results? Ten out of seventeen Double Gold winners were from the United States, among them, KGB Spirits from Alcalde, near Española, and their Hacienda Gin, an amazingly refreshing and herbal concoction with notes of lemon-lime, orange peel, star anise, pine, mint, pepper and clove, among others.

I had the opportunity to taste their gin with John Bernasconi (the”B” in “KGB” Spirits) and you can watch that video here.

I’ll admit I wasn’t prepared to experience such a complex and polished product, and I think you’ll get that from my reaction in the video.

Perhaps it’s the hand-crafted Arnold Holstein stills imported from Bavaria that make the gin so splendid. Perhaps it’s the organic ingredients and ultra-purified water. Maybe it’s a combination of all three and a few other secrets KGB’s got up their sleeves.

Whatever the reason, there can be no doubt that New Mexican Gin has made a splash in the world of Spirits. The beauty of it all is that in addition to the Gin, KGB also produces several Whiskies, Vodka, and an Orange Liqueur called “Naranjo.”

Their “field to bottle” approach allows them to control quality in an unsurpassed way, envisioning the process, literally from the ground-up, adding a dimension to spirits production that heretofore has been unheard of.

It’s all happening here in Northern New Mexico, and it would behoove one to get on this train before it leaves the station…who knows how far it’ll go.

*For a more in-depth look at KGB, here’s the Edible Santa Fe article.