Dear Katie – it has been a bit of time since your note in Live Taos asking “what about milk” – so this is dedicated to you.

The first thing that came to my mind with the word “milk” was a very poignant experience: 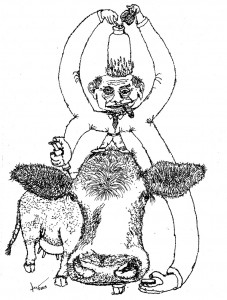 I was about sixteen, WWII had just ended, I was in high school and I needed a job to maintain my ever growing social entanglements. I had been employed briefly as what I considered to be a “comic book proof reader” in a liquor store on Cerrillos Road in Santa Fe.  After spending two weeks dusting dustless bottles and “reading” through the store’s comic book library a few times, I decided that there were greater horizons nearby that had my name on them.

So, taking leave of one of the really nicest persons one could ever hope to work for, I set off with his understanding and his blessings.  My trek was short, just about a hundred yards, to a dairy complex located at what is now the intersection of Cerrillos Road and Guadalupe Street. Part of the complex included the dairy store where you could buy raw milk, butter and what was no doubt some of the best ice cream, malts, Sundaes and sodas that humans ever contrived (no yoghurt – that was still nestled in Yugoslovia, Bulgaria or Turkey). The blessings bestowed on me by my former employer paid off- they needed help in the store, specifically someone who would assemble their menus. I applied and was accepted – 4 hours every late afternoon on Friday, Saturday and Sunday.

Life was beyond good…. The work was demanding but everyone knew their job and the bosses were good people. The whole operation was smooth – from the care of the animals, to the milking stalls, the bottling, the ice cream production, the dairy store and the milk truck delivery. There were also two bonuses – the first was we were told that we could eat as much of the dairy products as we liked (the dream of all dreams). The second was that I made friends with Joan who I really liked very much, a contemporary and a true friend – not the being that my rampant glands had their radar set for – not the being that I had to try to figure out what to say next and how to say it and what if I would say it wrong what would my eternal punishment be? No, it was rather that simple familiarity that flourishes with mutually recognized acceptance of each other as fellow travelers on a path in which the joy of the relationship is the co-engagement of the path. It was my first such experience — a life beacon.

After about three months things in the store remained as they had been in the beginning – great! I did notice that I had gained a few pounds but I rationalized that as being due to my sprouting up rather than out.  I also had achieved new status with my school friends and most of my fellow employees – my parents would occasionally let me drive the family car, a 1941 Crown Imperial Chrysler 9 passenger super stretch-mobile (of its day) to work.  Joan took my expanded dimension casually – which made me more appreciative of her – she could be excited about things but I did not have to try to impress her. So life went on – school, the challenges of sprouting up, maintaining status, and the weekends which were highlighted by scoops of ice cream, banana splits, malts and chatting with Joan.

On arriving at work one Friday afternoon I saw that something was not right, the usual smiles and straightforward looks had been replaced by downward gazes and solemnity.

My back bristled – “What about Joan?”

“Last night Joan and her parents and her brother and sister were driving from Taos to Santa Fe…… they were in the canyon between Pilar and Velarde and they hit a rock in the road – the car went off the road into the Rio Grande ……. They were all killed.”

I immediately left the dairy store never to return.

Almost 20 years later I had another milk/milk product experience. I discovered the Rancho Las Lagunas Dairy in Pojoaque – they sold raw milk and occasionally butter – the quality impeccable – they delivered – one could visit their plant and if lucky, usually about once a month, you could buy a pound of their raw milk butter – the best of the best. Dealing with Rancho Las Lagunas often brought back memories of what I had learned from my brief experience with Joan – the preciousness of relationships and life’s ephemeral certitude. But then there was something else that bonded the two businesses – raw milk.

Another twenty years came and went – my childhood affiliation with milk in a bottle had been transformed in favor of the product in paper cartons on supermarket shelves or subjugated to being labeled “organic” in trendy health food stores. There was now an intersection with a traffic light at Guadalupe and Cerrillos Road – leaving no trace of the activity that was there in the 1940’s. Rancho Las Lagunas was going out of business. Here (as elsewhere) practically all commercial milk had become pasteurized, homogenized, and thus deemed “safe for human consumption.” Milk delivery had gone the same way as the horse. Milk was no longer milk but kinds of milk – having graduated from a product made by a most noble four-legged creature to one transformed by a 2-legged critter intent on exploiting to the maximum its potential as an abstract commodity. (Nothing unusual – one can apply the same technique to anything, be it food, dirt, atoms, water, air, mineral or fire, good or bad, healthful or not.) I was at a distinct disadvantage – I had been conditioned to the kind of milk I had grown up with as milk – so it was very hard for me to identify with what most other people (who were born much later) considered to be milk.

Milk as I knew it as a child – I drank it then – would I drink it now? – perhaps

Is this personal? Sure it is – In spite of my own conditioning and dependency on habit, I find I am gradually weaning myself from the commodity.  This has been a result of looking into what goes on with the production of the stuff – beginning with the life cycle of the animal itself, how it is treated and its 2-legged master’s attitude toward its very being, and finally the treatment of the resultant commodity. The results of my investigations have proven to be depressing enough for me to have made my personal decision. Does this mean that I think that everyone should stop drinking milk and consuming dairy products because of my experiences? Hardly, that is presumptive, rather whatever the choice, hopefully it will be made rationally.