LISTEN TO TONAL RANGER RADIO EVERY WEDNESDAY FROM 1 TO 4 PM MST ON KNCE 93.5 FM, TO HEAR SONGS FROM THE ALBUMS REVIEWED IN THIS SPACE, AND SO MUCH MORE NEW AND INTERESTING MUSIC. 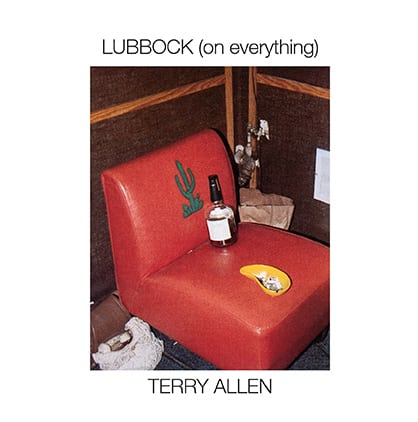 by Terry Allen (Paradise of Bachelors)

A few months back, I used this space to write about the reissue of Terry Allen’s 1975 debut album, Juarez. And now, Paradise of Bachelors has also reissued Allen’s 1979 sophomore effort, Lubbock (on everything), an album that Rolling Stone listed as one of its “50 Essential Albums of the 1970s.”

On a personal note, this is the album that introduced me to Allen 21 years ago, when I picked it up at a local record store in what was then my local town, Lubbock. I bought it on a whim really, but I’ve always been more than glad I did. Allen’s music has meant a great deal to me over the years.

As a reviewer, I’m now obliged to try and put personal biases aside and speak to you, the reader, as objectively about this album as I can. Well, I’ll try, but I’m not making any promises that I won’t be gushing by the time this thing is done. 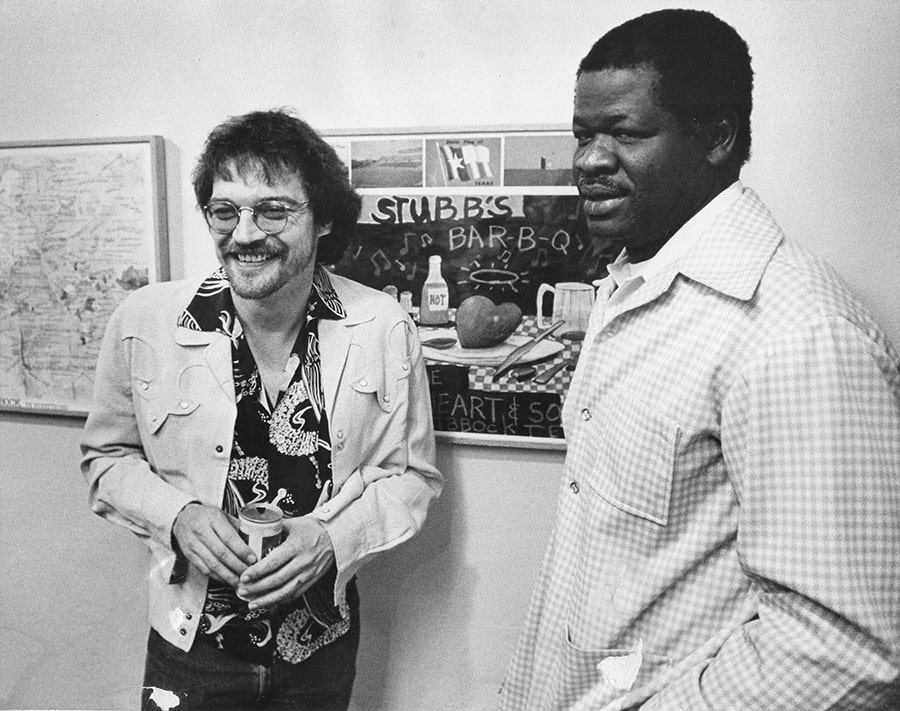 Terry Allen, left, and “Stubb” Stubblefield, the guy on the barbecue sauce bottles. You didn’t know he was real?

While Juarez was a sweeping cinematic score that served as a film without pictures, telling an almost linear story, Lubbock is also something of a concept album. The stories it tells are more minute and full of detail. They serve as an ode of sorts to Allen’s hometown, one he and his wife Jo Harvey had run from not that many years before, but they also hint at some deeper truths of the human condition.

Sure, you might “get” this album more if you have spent time in the Hub City, but you also get it if you’re a fan of tongue-in-cheek-songwriting, like Randy Newman, earnest portraits of American life, like Bruce Springsteen, classic country music, waltzes, rhythmic pianos, Texas drawls, and nostalgia for the 1950s.

The Paradise of Bachelors reissue takes a lot of the tape hiss out of the original recordings and corrects some other sonic issues, and it sounds really great. Lubbock is more heavily arranged than Juarez, but still relatively sparse, as Allen continued to avail himself of the talents of producer extraordinaire, Lloyd Maines (father of Nancy), and the rest of the Panhandle Mystery Band, a motley crew if ever there was one. 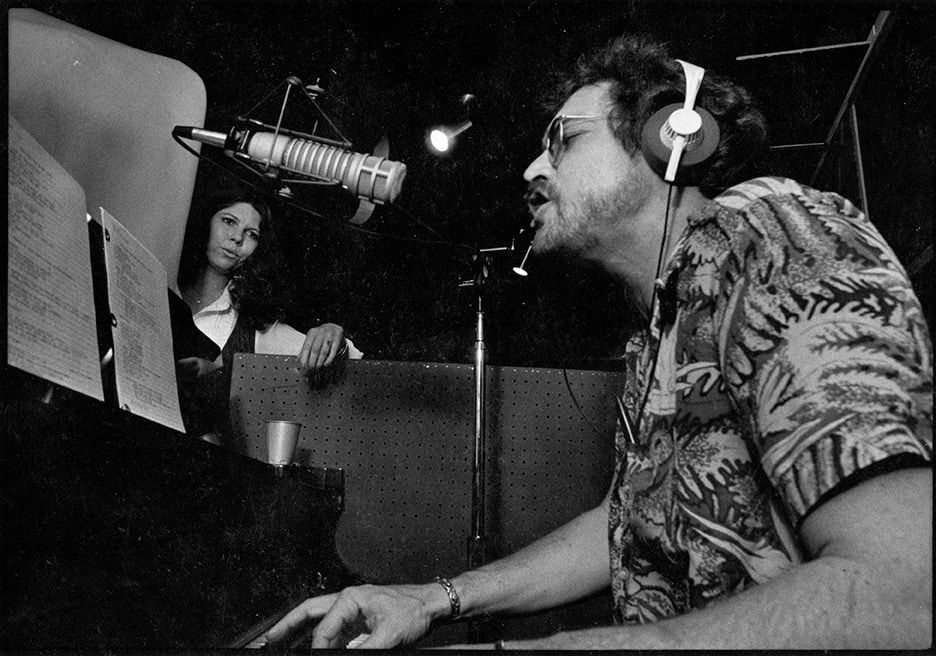 Just like the actual city of Lubbock, Lubbock (on everything) is not going to be everyone’s cup of tea. The album might seem “too country” (Allen himself has asked, “what country?” when given this description of his music), “too artsy,” “too quirky,” “too about Lubbock,” or any other number of pejoratives that don’t really make sense, but are just different ways of saying, “this doesn’t quite fit into my definition of music and it makes me uncomfortable.”

But, if given the chance, I think those of you who are not drinking the tea could be persuaded to love Lubbock as I do. First off, say you don’t like, or have never been to, Lubbock, Texas, so you just can’t relate to classic tunes like “Amarillo Highway (for Dave Hickey),” a song that’s been covered by lots of folks, including Robert Earl Keen, The Maines Brothers and more recently in concert, Sturgill Simpson and Jason Isbell. And even the tale of the self-destruction of a high school football hero—“The Great Joe Bob (a Regional Tragedy)”—doesn’t float your boat? That’s fine, I completely understand. I’ve had my own issues with the city over the years, and though I do love football, I’m constantly at odds with the way the sport reinforces violent behavior in young men and so callously disregards their health for the sake of money and entertainment.

Surely many Taoseños can appreciate that suite of songs? “Truckload of Art” is without competition in the realm of songs about trucks driving art from the east coast to the west coast to show off, but then having an accident and catching fire. There’s no arguing that, don’t even try. And who in Taos can’t appreciate the line, “you better look good, you better act right, because the art mob’s out tonight,” from the song, “The Collector (and the Art Mob)”? Are you coming around now? I thought so.

If not, well, we’ve all got to eat, right? And we’ve all got to drink, maybe? Let me say that “The Beautiful Waitress” has everything: first off, it’s a waltz (awesome!) and secondly, it’s hilarious. However, in true Allen fashion, the song is also poignant and a really valid look at the brief yet important day-to-day relationships that happen as part of this human experience. 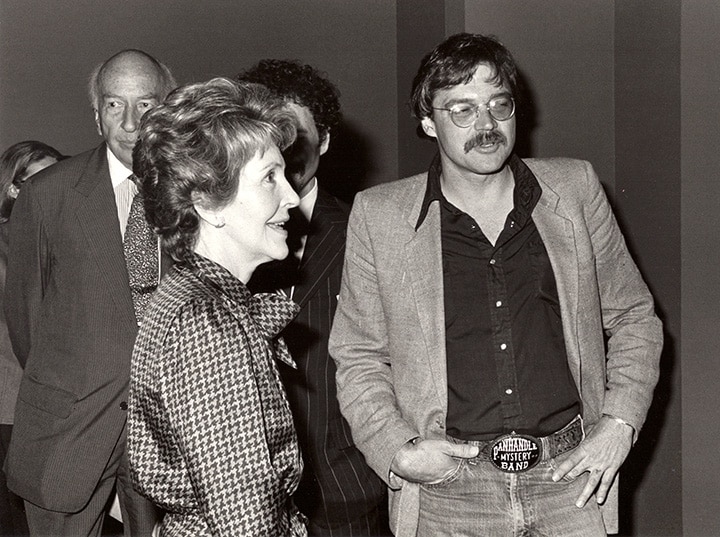 This epic album also has Miscellaneous Songs, and I think we can all agree that anything miscellaneous is mostly harmless and as such, possibly even “universal.” This holds up in the case of “New Delhi Freight Train,” probably Allen’s most well-known song (once covered by Little Feat). The theory probably doesn’t hold up with the songs “FFA” and “Flatland Farmer,” a two-song series of “agricultural/portrait” songs that uphold Future Farmers of America as a direct leadership pipeline to the presidency (timely, no?) and the notion that guitarists with animal husbandry experience who just happen to also be from areas with minimal fluctuation in elevation, are much better than their peers from hillier places like Nashville.

At this point, I know I’ve got you sold on the possibility that Lubbock (on everything) might be one of the best albums of all time, but still, I’m going to keep going.

We all deal with bouts of personal duplicity, so I know you’re going to love tunes like “My Amigo,” with lines like, “my ego/ ain’t my amigo/ anymore,” and “I Just Left Myself,” a song about just getting away from all your troubles, even if you are the source of those troubles: “There’s still a smear/ across the mirror/ that I have been/ but it won’t/ reflect on me/ again/ cause/ I just left myself today.”

OK, I guess it’s possible that you still might not love this album. Admittedly, it’s an odd batch of tunes, I get it. But you can’t say I didn’t try.