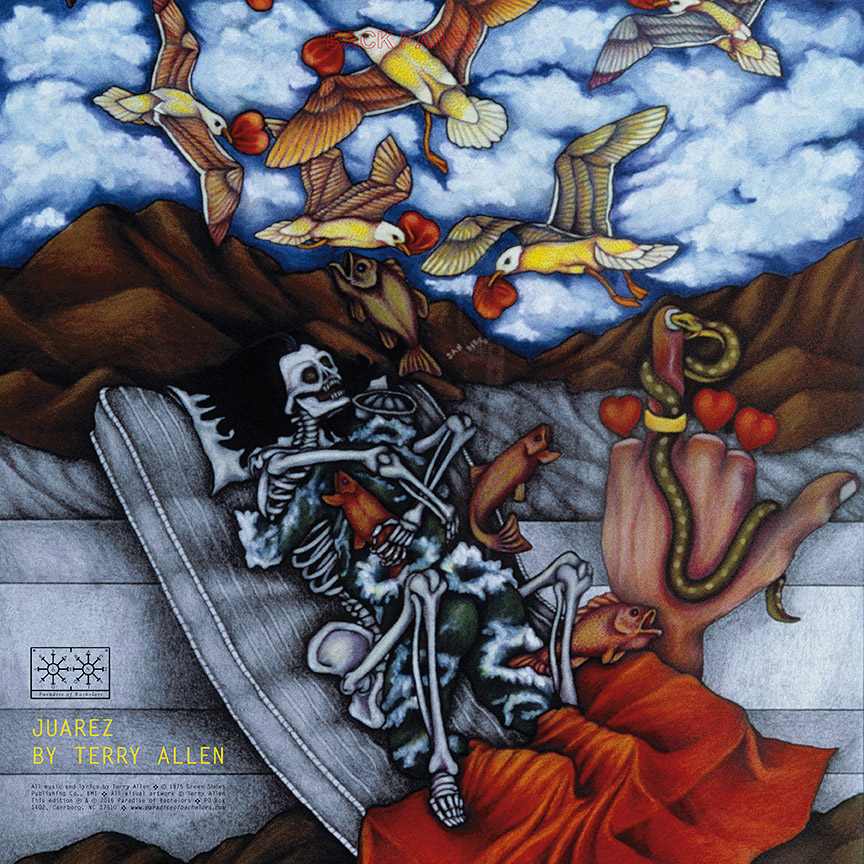 The back cover of Juarez.

Juarez
by Terry Allen (Paradise of Bachelors)
Grade: A+

When Terry Allen recorded the music for his 1975 debut LP, Juarez, it was more of an art project than an attempt at musical stardom. Allen himself has described the project as a “haunting,” a force that has informed and influenced all of his visual art and musical projects in the 41 years that have passed since the album’s release.

Segments and portions of the cinematic concept album have turned up elsewhere as drawings, prints, installations, texts, a screenplay, a one-woman stage play and an NPR radio play (both starring his actress and writer wife, Jo Harvey Allen), more songs, and a musical theater piece written with David Byrne.

In the spirit of contextualizing Allen’s entire career in relation to this sparse collection of songs, the new reissue, from North Carolina-based label Paradise of Bachelors, is the first to feature the originally intended artwork (a set of nine lithographs included in the album’s book). It’s also the first time the album has been reissued on vinyl (local record store Heads Up Music can order the album on vinyl or CD). 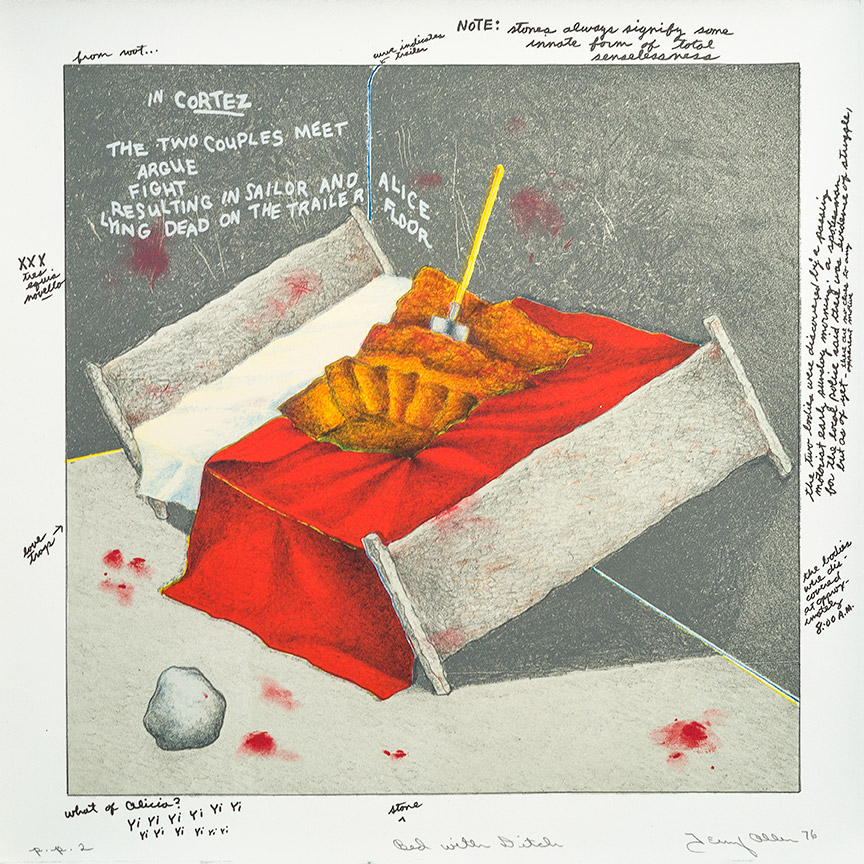 One of nine lithographs created in conjunction with the album release of Juarez, available here for the first time on a reissue.

Presented in album form, Juarez is a musical without actors and a movie without images. It’s a concept album with lyrics that read like a screenplay, telling the stories of two couples whose lives become twisted together tragically by fate. The fifteen songs here are laid nearly naked, with most recordings featuring only Allen’s vocals and piano. Occasionally, guitarists Peter Kaukonen (Link Wray, Jefferson Airplane, Black Kangaroo) or Greg Douglas (Van Morrison, Peter Rowan, Steve Miller Band) join in on the action, adding some nice riffs to what Allen dubs “a simple story.”

The press materials for the Juarez reissue include a quote from Cormac McCarthy’s The Crossing, a proper point of reference for Allen’s literary story of love and violence set against a Southwestern landscape (the Allens, originally from Lubbock, Texas, have lived in Santa Fe for years, but were living in Fresno, California when Juarez was written and recorded). 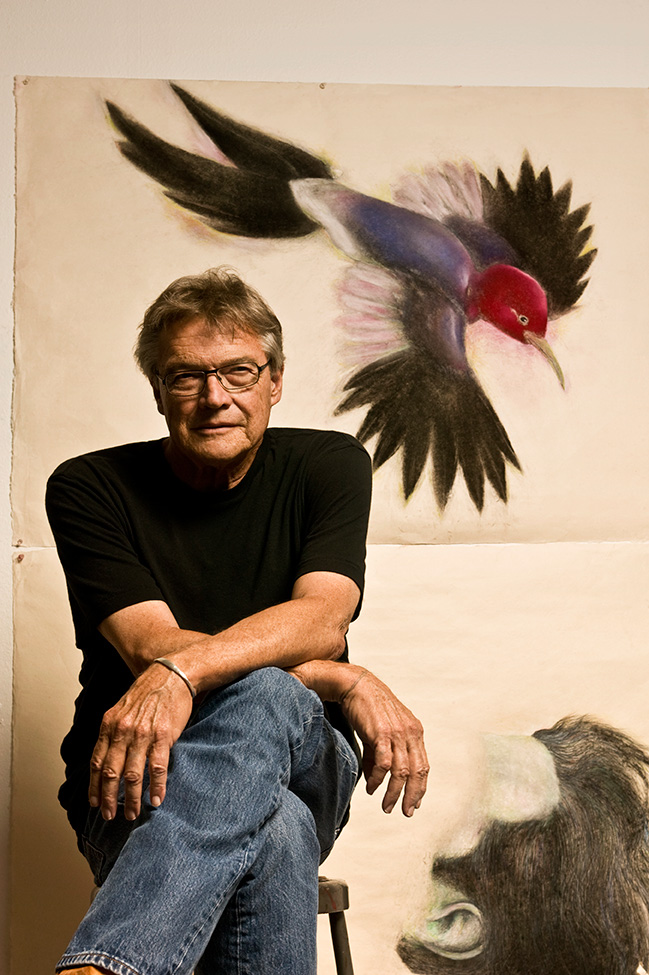 Allen has made a point of re-recording many of the Juarez songs on different albums over the years, often providing them with more dense arrangements than were originally possible when the album was recorded over the course of a few days at Wally Heider Studio in San Francisco in 1974. And while those newer versions of Allen classics like “Cortez Sail,” “There Oughta Be A Law Against Sunny Southern California,” “What of Alicia” and “Four Corners” are all equal parts intriguing, morose, funny, and just plain good, there is something eloquent and ghostlike about the stripped down emptiness of these originals.

It’s as if Allen were walking through the desert with his keyboard and a microphone, recording in the dark of night, with nothing but the wind and the chirping of some crickets in the background. Once in a while, another desert-roaming musician with a guitar walks through camp, staying for a song or two before moving on and leaving Allen alone in the wild again.

While Allen’s visual art resides in some of the most important collections in the world — the Met, MoMA, the Hirshorn, MoCA and in many public spaces like Dallas-Forth Worth and George Bush International Airports; San Francisco’s Yerba Buena Center; and the Texas Tech University campus, where coincidentally one of the oldest buildings on campus (a historic dairy barn) is being repurposed to house the Allen Collection Studio and Multipurpose Interdisciplinary Space.

The Allen Collection will allow visitors to glimpse more than five decades worth of creative processes that Terry and Jo Harvey Allen couldn’t bear to throw away.

It’s a good bet that fragments and pieces of Juarez turn up in many of those creative endeavors. As will some of the ideas on Allen’s 1979 homage to his home town, Lubbock (On Everything), which will also be reissued by Paradise of Bachelors later this year.