SOMOS is hosting its first ever Taos Writer’s Conference this weekend, Friday March 10th through Sunday March 12th. Among the many events planned are a series of workshops offered by established Taos writers for aspiring writers of all skill levels in our community. Veronica Golos will offer her time and expertise on Saturday from 9 a.m. till noon in a workshop entitled Writing From Behind the Mask — A Workshop of Persona Poetry.

Ms. Golos bills the workshop as an opportunity to take well known stories and retell them by offering your own voice to the characters, be it the wolf in Little Red Riding Hood, or an elder Red reflecting on the same story, or the hurricane itself in the story of Katrina. Ms. Golos proposes that “so many stories seem to be ‘the truth’ yet, told through the masked poet, a different perhaps truer picture arrives.”

I confess, I have a schoolboy’s anxiety about speaking with poets about “the truth.” I seem to remember Socrates warning me that poets were possessed by a kind of divine mania, and that they themselves could not account for what they said. Nevertheless, I was curious about Persona Poetry, and in particular Ms. Golos’ claim that it may be an avenue towards greater truth. Her response was strong, if a bit esoteric, and it became clear to me that Persona Poetry was a powerful tool in her work as a poet, which she described to me as “a dialogue with American history and my own history.” 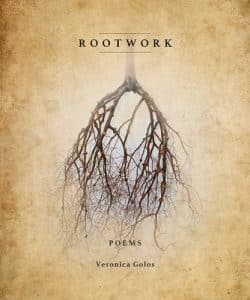 To help illustrate the work of the masked poet, Ms. Golos spoke about some of the challenges she faced while writing her most recent book of poetry, Rootwork. In this work of Persona Poetry, the author lent voices to the abolitionist John Brown and his wife Mary Day Brown. She spoke with respect for these people, now characters in our shared history. She felt that she had to adopt a more restrained voice, and she tried to avoid topics of discussion such as sex and feelings which might have been taboo for the times. She wanted the characters to sound both true to their times while being true to her own voice. Ms. Golos expressed the constraint of the form very well by saying that she wanted to bring her voice to the character’s experience and leave her own experience behind. “It’s the voice of the true you, in the experience of the other,” she said.

It sounds like a powerful gymnastic, but I didn’t quite understand. I asked her to contrast this approach to a poem like Rilke’s Panther, where one could simply describe their experience of a magnificent caged animal, behold the truth of the moment, and point at it. “No, no, no,” she said; although she respects the poem, “pointing is not helpful, your participation is.” At another moment she said “pointing is preaching, it is not poetry.”

Within the larger context of her dialogue with history, Ms. Golos seems to be asking us to engage the stories which shape our understanding of the world by both presenting those stories while questioning them with our own voice within the story.  It is through this engagement, and not by pointing, that “poetry allows [us] to find what is complex and revelatory.”

Veronica Golos expresses great admiration and thanks to Jan Smith for organizing the Taos Writers Conference. It is a tremendous opportunity to discover and engage the many great writers who call Taos their home.

veronica golos’ workshop exploring persona poetry — Writing from Behind the mask is part of the inaugural taos writers conference march 10-12, 2017. to take part in this weekend long celebration of all things written word sign up today!