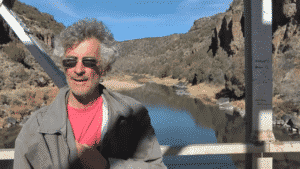 Rick Collignon is the sort of man who sits easily in every chair, and when he stands, he stands with his hands in his pockets. In the late fall of 1974 he came to Northern New Mexico for the first time to celebrate Thanksgiving at his friend Irv Givot’s house in El Rito. During the last 44 years he has started his own roofing business, married twice, raised six children and written six novels.

“I heard Anwar Sadat say in an interview that ‘there are three things a man should do before he dies: raise your family, build your crypt and write a book. I liked that,” he says.

Rick got his start writing when his brother, a published mystery writer, sent him the first chapter of a new book and told Rick to write the next one. What happened after that, according to Rick, was an obsession beyond his control. The first novel turned out to be practice. “My friend told me it was like the worst Raymond Chandler mystery imaginable,” he remembers.

But the addiction didn’t stop. And it had to be something like an addiction for him to manage to write while working full time, starting his own business and raising his family. “I began to suspect that I could only make it [writing] work when it’s impossible.” Rick finished his sixth novel, Lost in a Place so Small—now out for publication—in spite of retiring three years ago.

On the publishing process he said simply, “It’s like hanging yourself slowly.” Rick has worked with the same editor—recently retired—on all four of his previously published novels, a man he affectionately refers to as “Fred.” “I heard one time how Thomas Wolfe and his editor used to lock themselves in a hotel room with a bottle of whiskey. That’s what I wanted. And I think I had that with Fred,” he said as he touched the back of his head with his hand. “I’m not very self-promotional, I just want a copy to put on my shelf. Well… maybe I want more than that. I mean, I think authors want to be read.” 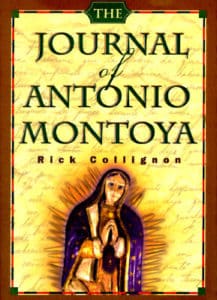 I’ve read one of Rick’s books, The Journal of Antonio Montoya, the second book he wrote and his first to be published. I gulped it down in four days, remembering how it felt when I first discovered reading, stopping only to work, sleep, drink coffee and eat the enchiladas the story made me crave. Rick’s characters live in a world rich in its simplicity. He describes them with glancing blows, treats them with a mother’s fondness, a father’s sense of reservation and above all a regard for each one’s humanity. Rick is a man who is easily surprised, not because he doesn’t see people—but because he does. And as his readers, we are left with a sense of meaning that has preserved its mystery.

Keeping the above in mind it was with some chagrin, and confusion that I asked what has become a necessary question: how do you feel about adopting Black and Hispanic voices to write your stories? Have people approached you about that? “Mostly people approach me about their roofs leaking,” he said with characteristic, dry honesty. He thought back to his early life in New Mexico. “When I first arrived, I thought ‘wow, this is a place I’ve never been.’ Everything felt odd, and it wasn’t ‘the mountain…’ I’ve never related to my own culture, to where I’m from. It never made any sense to me. And when I moved here I was living in Questa, and Questa’s a Hispanic place with a Hispanic voice, I just listened… I think there has always been a part of me that wants to go where I’m not wanted.”

Some topics are so disastrous that they are almost unavoidable, and it was in that spirit that we came to talk about writing in the digital age. “What I don’t understand is that these days everyone’s a writer, but no one reads. It’s unclear what makes people want to write, but somehow there is still the urge to put feelings into words… and I’m glad of that, I think.” I asked him if he thought it was helpful for writers to share techniques for writing or the discipline of writing. “No. But as a reader I’m fascinated by writing patterns. It’s all a mystery. Mystery and hard work.  One time someone said to me ‘It must be nice to have things come to you’… I believe that if you sit there long enough something will happen, but people who say it’s easy I want to kill.”

Rick told me he doesn’t talk writing that much, “it’s really a solitary pursuit.” Maybe it’s the solitude that demands so much discipline. Or maybe discipline is required to sustain the strain between having to plot and build, and trying to tap into an intuition that is somewhere between remembering and dreaming. We are lucky to have Rick Collignon to build, and to remember, and to write into our midst.