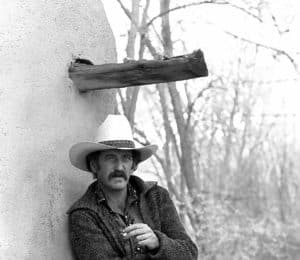 Looking back on a legendary Taos artist with magpie

Editor’s Note: From July 3-31, magpie gallery, at 1405 Paseo del Pueblo Norte (in the Overland Ranch complex) will host an exhibit featuring a special collection of work from legendary Taos artist Bill Gersh, including five pieces from some of his earliest collectors, Larry and Lisa Singer. Looking ahead to this celebration of Gersh’s life and work (24 years after his death and just shy of what would have been his 75th birthday), we asked Gersh’s daughter, and magpie proprietor, Georgia Gersh to reflect on her father’s life and how his work is still relevant to the Taos art scene.

I spent this rainy Sunday afternoon, coincidentally Fathers Day, going through some of my dad’s things.

Even 24 years after his death, my sister Rachel and I still have a lot to look over, determining what is precious and what is disposable. Sometimes it takes several decades to determine the value, personal or monetary, of a thing.

Sometimes it takes several decades to let go of things. We say to ourselves, maybe in my dad’s voice “alright already, you haven’t used this in 24 years, it’s covered in dust, it’s getting eaten by pack rats. Either sell it or throw it away or put it in a plastic box, but it’s not doing anyone any good here …”

I think that’s what this show is about for me. My sister and I each have several pieces up of our dad’s in our homes, some that we’ve had since he died. I have a couple paintings that I have brought across the country with me twice.

Otherwise, we have an incredible, well-preserved collection of works in storage, many that we haven’t been able to part with until recently. This show will feature some very important canvases and a selection of unframed works on paper as well as five pieces selected from the collection of Gersh’s early collectors and dear friends, Larry and Lisa Singer.

Right now though, I am going through endless stacks of papers in flat files stored in what my dad referred to as the BJ Café, an outbuilding that has served various purposes over the years and is now primarily storage and a teenage hangout for my son and his friends. The Café is packed with treasures, but today is just for going through papers. I am sorting some of his old correspondence, poetry, friend’s manuscripts, posters from benefit concerts at Old Martinez Hall that he did the artwork for, boxes of photographs; from between 1950 and 1984, copies and transparencies denoted with page numbers for literary publications, an artist statement and resume from 1986 typed on the typewriter and Xeroxed and his college diploma. Stacks and stacks. It is a laborious task, but full of discovery. I found a great ink drawing on notebook paper that I might just put in the precious category and frame.

I found several things to pass along to people that might treasure them, or not, but they’ll be out of my hands. It’s essentially Bill Gersh’s life story in need of a great amount of organizing and editing and eventually publishing.

Because he was important. My dad’s life as an artist and cultural influence is important.

Looking through stacks of his papers today reminds me what an impact he had on the world around him. People loved him so much and took time to let him know that. He had a very fortunate, full, crazy 50 years on this planet. Long before Facebook and emailing, he kept in close touch with many people. They sent him poems and manuscripts and photos of their time together. He lived in the era of the Xerox machine and copied everything he got his hands on.

He was so special, so curious and knowledgeable about culture, religion, humanity, art. This all translated into his work as an artist.

Gersh was also very involved in the literary community in Taos. He did a lot of work to get together the visual arts, music and literary-minded in the community. He was  involved with the Taos Poetry Circus, the Taos review and alternative publications such as The Taos Times and Horsefly.

My sister told me recently, “They called him The Rough, Tough Cream Puff, at Reality Construction (one of several communes he helped found). I think in many ways his work was also like that. At first impression some of it can be so raw and confrontational. Then as you live with it, it starts to feel softer, warmer, you find the humor in it and the heart in the brushstrokes.”

For anyone unfamiliar with Bill Gersh or his work, give him a Google search. There is a wealth of images, articles and even some video footage online.

Join magpie for an opening reception on Saturday, July 7, from 5 to 7 p.m. For more information, visit magpietaos.com