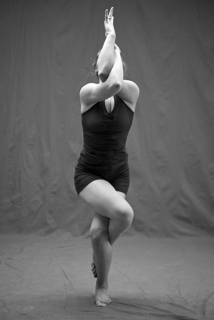 Genevieve Oswald In Garudasana, by Zoe Zimmerman for Sundara Studios 2013

Many Hatha Yoga forms take their names from the animal kingdom. Poses such as downward dog and cat pose make sense in translation when looking at them, whereas poses such as eagle pose make little sense at all.

Eagle pose makes little sense because the form rises from the myth of Garuda, the king of birds, who transports Vishnu and aids humanity in the fight against demons. In Hindu mythology, Garuda had the wings, talons and beak of an eagle, and the arms and legs of a man. Eagle pose, or Garudasana, aids poise, concentration, coordination and balance, mimicking the nature of an eagle’s intense concentration as it gazes down upon its prey from high up in the sky.

Begin standing. With an exhale, slightly bend your knees. Inhale to stack your left knee on top of your right knee. Room permitting, wrap your left foot behind your right calf, or draw your left foot lovingly in to hug your right outer shin. Exhale to root into your seat and heels. Inhale to lift and spread your arms wide. Exhale to cross your right elbow over your left. Bend the elbows so that your fingertips point up toward the sky and bring the backs of your hands to touch.

Again, if room permits, draw your left hand closer to your heart and bring the palms of your hands to touch. With your breath inhale to rise taller in your spine, lift your elbows and gaze higher toward the sky. Exhale to sit lower into your seat, rooting down into the Earth, bending more deeply into your ankles, knees, and hips. Hold for five to ten breaths, inhaling to rise up and out of the pose. Repeat on the second side.