I made a pact with myself that this will not be about what I think you should do or not do with food, not about what I think you should or should not believe about food or what I think about the food you should or should not eat – reason – not that I’m not a professional expert on the subject —- rather—-I prefer to approach the subject as a rather significant insignificant human being attempting to come to terms with a seemingly personal perpetual survival challenge when it comes to food.  What I have decided to do is share personal experience – experience related to food and that may include anything that I do or think that in some way I have either incorporated into my life OR hope to incorporate into my life.

Are you bored yet?  Here is a story:

In the early 1940’s my uncles had a high-end shoe store on the Plaza in Santa Fe. One was drafted, leaving my aunt and myself to operate the business with the remaining (4F) uncle. I often took a sack lunch to work and would sit on a bench in the Plaza to enjoy a half-hour or so respite from the really demanding work that I as a young teenager was thrust into. My Aunt Lillian (“Lil” or “Bee” to family) often joined me. When she did I knew I was in for a continual one-sided talk which covered just two subjects: Washington Politics – she had worked for some years as a secretary in DC; and Food – she had also lived in Florida where she had been involved with nutrition (whatever that was) groups.

Picture one very-overloaded teenager sitting on a bench in the Santa Fe Plaza in 1943 attempting to come to terms with the demands imposed on him by his principle social responsibility –  his hairstyle – and the daily war headlines, and his inescapable big-time business responsibilities and, oh yes, his ever- maturing glands. Picture Aunt Lil – a rather tall, gaunt, extremely nervous, never-married woman sitting beside him expounding on her two themes.  As for Washington, the fact is that up to today and as was the case then – especially then – at those very moments with her, I had absolutely no idea what she was talking about. Washington was the place where FDR made the decisions about the war and how much gas, butter, meat or nylon stockings we civilians would be rationed.

Food was a biggie and the law was quite specific as to how much of it people would be able to buy weekly. It was also a simple matter – eggs were eggs, steak was steak, sugar was sugar, fruit was fruit and veggies were veggies. Milk was another thing. Up to the time of Aunt Lil, milk was that white liquid that cows produced that had cream on the top two inches or so of the bottle. I knew it to be a most important, if not the most important, basic food – something impossible to live without. Plus, it was hand-delivered to one’s doorstep.

One day, having lunch on our plaza bench, Aunt Lil attempted to dissuade me of my knowledge of the value of milk by announcing that “Cow’s milk is unhealthy for humans.” With that announcement I looked at her frail, hyper-nervous visage and decided that I’d best react to her belief the same way that I reacted to her reports on Washington life. Her other pronouncements about food – especially meat, soft drinks, processed fruit and veggies were given the identical response by other family members – “Lil’s nuts!”.  In spite of this consensus, I felt a certain sympathy and admiration for Aunt Lil, for it seemed to me that she had the courage to voice an opinion that was unheard of and tantamount to insanity. 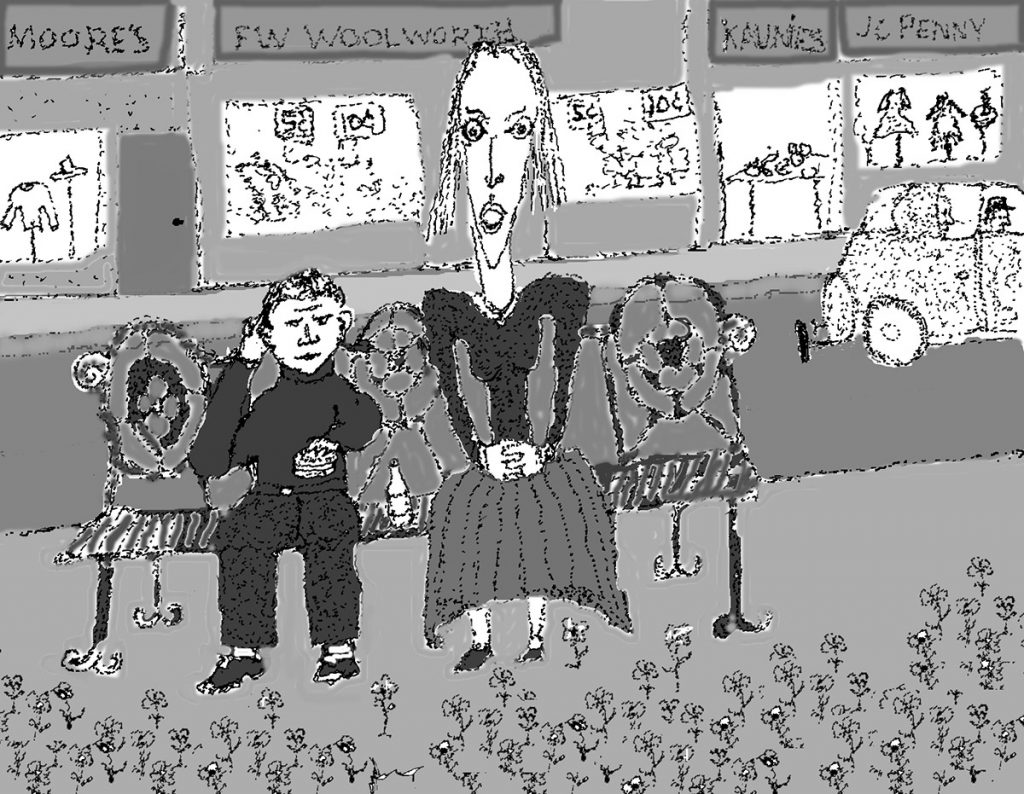 Aunt Lil went on to die of cancer – I always suspected that she really succumbed to tension, but what does suspicion have to do with reality?

That was then and now is now. My perception of life, including the two focal points of Aunt Lil’s life, have altered considerably – notably beginning decades ago when I began to think that Aunt Lil was not so nuts, but rather an extremely sensitive soul who never seemed to have any allies. I learned what was for me a very important lesson – not all people who speak with passion are crazy. Perhaps they are – or perhaps they may be touching on something well-worth paying attention to.

And now is not now but some seventy years since my one-sided dialogue with Aunt Lil and two years from the now in which the words appear before me on my monitor. My wife has during the past month or so been presenting me with a mound of information about the effects of the microwave oven on: a) the human body and b) food. Since I am in good health and although I suspect that there is a notsogoodthingforthebod there, I embrace the same response as when Aunt Lil was expounding. As for the food factor – well yes I think there is reason for suspicion, but I really don’t want to be bothered.

It is now two years later and one week ago: having laid the microwave subject to rest for the two years during which time we made extensive use of our unit – defrosting, heating (leftovers, drinks, sauces, breads, etc) and occasionally cooking, we have adjusted to what seems to be a permanent solution . . . but . . . today my wife presents me with a new (actually old) batch of information about microwaves.

At first I find myself taking the same stand that I did two years ago; however, much to my surprise, Aunt Lil’s image pops into my mind and with it the point “not all people who speak with passion are crazy.” At that point my intellect begins to operate with my emotions and the marriage of the two creates  questions which take me over:

As I ponder these questions I discover that convenience is the biggie, then I also discover that my brain is approaching “tilt,” so I let the matter rest a bit . . . a few hours later the answer comes – devoid of all the “factors,” pressures, informations, suppositions, testimonies, expertisms, conditionalism, mindfuckisms, personal lethargies, social approbations.  An epiphany which I happily share with my wife – “The microwave no longer exists.” – My wife gives me a hug.

It is now the now that is now, a week later than my pronouncement and our mutual joy. We know we have lost a convenience, but with a little adjusting of time I realize that the “no longer exists” mantra takes me through cooking just fine – actually very much better.

Friends ask me why we don’t have a microwave – my answer is simple: “it doesn’t exist.”