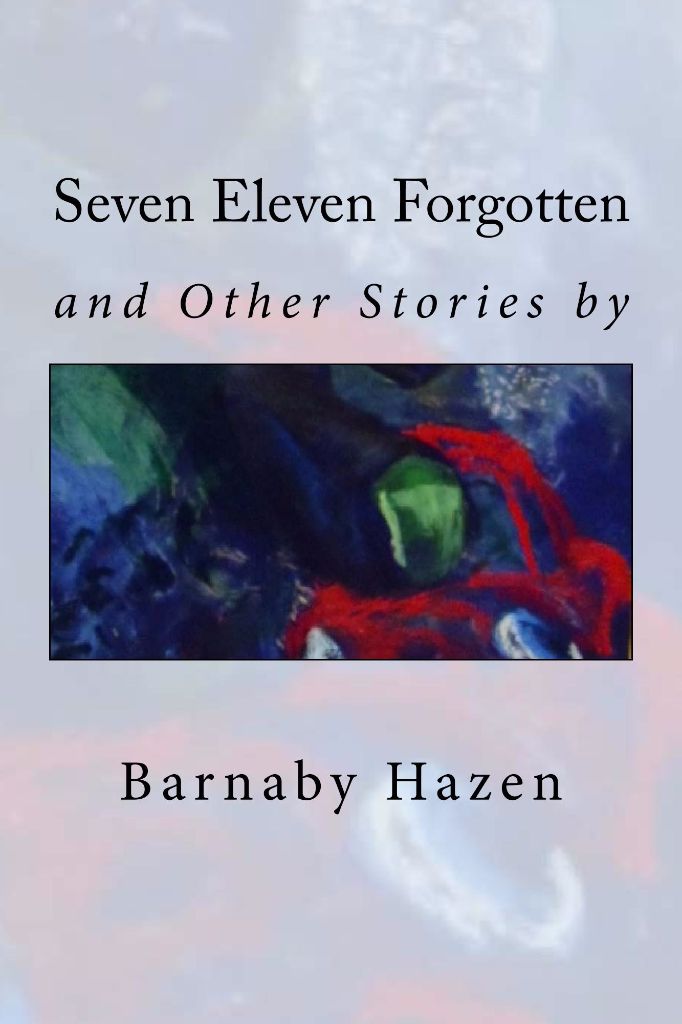 Barnaby Hazen has a thing for convenience store stories. And as it turns out, he’s not alone.

It occurred to him that other writers might enjoy embarking upon this literary journey with him. “Open twenty-four hours a day and vending items magnetic to the elements of human suffering and desperation, convenience stores such as 7-Eleven and our own local All-Sups usually jog some memory of note if one thinks back,” says Hazen. He set up the website sevenelevenstories.com and began accepting public submissions, which proved numerous enough for Hazen to launch a print periodical. Seven Eleven Stories, Volume 1 was released in October 2015. (Submissions are now open for Volume 2).

Along the way, he generated enough of his own material to publish a collection completely composed of his works; Seven Eleven Forgotten and Other Stories was released at the end of 2015. I haven’t read it all the way through yet, but it’s a book that lends itself to partial readings — flash scraps of stories, told a handful of pages at a time, some featuring recurring protagonist Alex Aronovich and others connected to the theme in a more obscure and sometimes even seemingly-unrelated fashion. Hazen assures us that the common thread is clear to him, so if you want to hear him explain it — or not, who knows — then show up at the SOMOS Salon on Sunday, May 15 at 2pm for a reading and conversation about the book.

Even partway through, I can already tell you that the language of the book is chewy, sometimes surprising, a pleasure to meander your way through; long winding descriptive mouthfuls followed by quick bursts of dialogue, an effect at once languorous and terse. The stories are woven short and tight, nuanced and darkly humorous. If you want to pick up a copy of the book before the reading, they can be found right here in town at Brodsky Bookshop or Wired Café.

He’s also presenting the reading as a call for submissions or stories, so stick around and talk to him afterward if you’ve got a tale to share. He will be putting Seven Eleven Stories, Volume 2 together all summer long.

Incidentally, you may already know that SOMOS is moving to a new location (over on Civic Plaza Drive across from the Toolbox, truly an inspired move if I’ve ever seen one myself). This reading, whether by accident, design, or both, will be the final live event at the old SOMOS Salon in its current location next to Indian Hills motel. If you’re prone to nostalgia, then certainly don’t miss this chance to say hello to burgeoning Taos literary talent while saying goodbye to a good run at the current Salon.

For more information on Seven Eleven Stories generally, check out the website: www.sevenelevenstories.com.

BOOK COVER ART was taken from a painting by Sarah Nettleton.