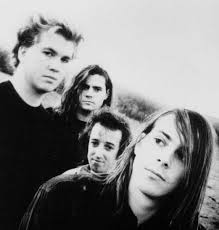 Self-professed geeks Toad the Wet Sprocket epitomize the culture of their hometown Santa Barbara, California. Much like Taos, Santa Barbara is a place of deceptive depth and extremes; bright sunshine and idyllic Southern California beaches on one hand; long, foggy, grey mornings and cold ocean breezes on the other.

It’s the latter that Toad relish and have thrived in. Their bittersweet sound and lush melodies are often the vehicle for lyrics that speak of pain and alienation, a sort of precursor to Elliot Smith’s own ironic sound (without the smack). Take this sample of lyrics about a funeral wake from the cut, Way Away, off their 1989 debut album Bread and Circus, for example:

“Line of people who pass you by
posing sympathy with their white-washed eyes.
Ladies feigning their mourning cries,
Men shake your hands –
Way away.”

Their mistrust of people’s motivations and cynical stance are part of the Toad sound, and it’s been their greatest accomplishment to make that sound palatable, even desirable via their impeccable choruses and airy guitars; a sugar-coated bitter-pill.

It’s all part of their clannish upbringing and cult-like behavior, they’ve always fancied the last laugh, and they achieve that through their biting satire and inner-circle jokes. 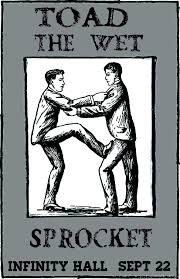 Take the band’s name for example, a fictional one from Monty Python’s Flying Circus, created for the program “Rutland Weekend Television” in 1975. The group took the name as an inside joke amongst themselves for their first gig in 1986 and it stuck. They were teenagers at the time and wise beyond their years. They were brooding and introspective, the guys in high school you never noticed, or would even care to. More often than not, they were together practicing music in one of their parent’s garages, laughing at inside jokes and finding consolation in their unique sound.

Back in ’89 and the early 90’s in Santa Barbara the Take Back the Night movement was strong, its message of anti-rape and strong feminist influences a by-product of the University of California at Santa Barbara’s left-leaning politics. It was a heady time when the streets were flooded with protesters marching by candlelight, their sense of solidarity palpable against the commercialism of downtown State Street.

Toad’s One Little Girl was the unofficial anthem of the movement and was the vehicle from which they would launch a career that is now in its twenty-fifth year, replete with national Late Night television appearances and commercial success.

After the sensation of Bread and Circus, they could have gone absolutely commercial, but retained their ironic stance for their follow-up, Pale, the following year. An impressionist masterpiece, Pale varies from the politicized Chile, to the anti-junky-anthem Come Back Down, but it’s the first track,Torn, that most speaks to who they are and what their about. Sample these lyrics:

“I fear nothing, beside myself,
Please don’t watch me,
Love like an infant trying to stand up.
Am I two souls, one hard, one whole?
Am I real?
I don’t want to feel anything, anymore. “

By the time their third album Fear came out in 1991, they were dangerously close to super-stardom, with the mega-hit All I Want coursing through FM airwaves, and David Letterman enthusiastically introducing them, perilously painting them as a bubble-gum top forty band. They responded in typical Toad fashion, closing in on themselves and staying wary of the trappings of becoming “rock stars.” 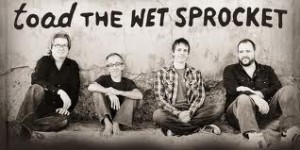 It took three more years for them to release the chill Dulcinea in 1994, an attempt to return to their folksy roots. Their last album before a long hiatus was Coil in 1997, that featured their anthem Crazy Life for long-jailed Native American activist Leonard Peltier.  Then… nothing for 17 years until this year’s New Constellation, funded on Kickstarter in order to sidestep the music machinery they found themselves ensconced in and extremely wary of: machinery that pushed and pulled at their long-standing bond and challenged their ultimate insider stance.

Time has made them wiser, but still cynical as ever. They now know that their pop sound is unique to them and the perfect vehicle for their ironic lyrics, a chiaroscuro masterpiece that continues to shine after a quarter century. However, after all these years, they still can claim to have the last laugh, as evidenced by this quote by Monty Python’s Eric Idle, who conceived the original Python sketch about the fictional Toad the Wet Sprocket:

“I once wrote a sketch about rock musicians and I was trying to think of a name that would be so silly nobody would ever use it, or dream it could ever be used. So I wrote the words, “Toad the Wet Sprocket.” And a few years later, I was driving along the freeway in L.A., and a song came on the radio, and the DJ said, “That was by Toad the Wet Sprocket,” and I nearly drove off the freeway.”

San Marcos High School buddies, Glen Philips (guitar/vocals), Todd Nichols (guitar/ backing vocals) Randy Guss (Drums) and Dean Dinning (Bass/ Guitar/ Backing Vocals) admit that Toad the Wet Sprocket is perhaps “a joke that went on for far too long,” but I’d argue that the joke’s been on the music industry, for behind the top-forty hits and grueling tour schedules, the bands deep sense of cynicism is still what propels them, that their still just a band of geeks that look on the world with a bundle of mistrust and still live by such lyrics as:

You can catch them tomorrow night at KTAOS Solar Center and get in on the joke yourself. Tickets are $25 in advance and $30 day of show.