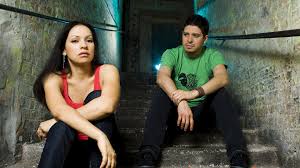 So these 2 beautiful intergalactic musically uncanny beings have done it again, creating what I think is their best album yet for sure.

Their first hit song in 2009 was “Hanuman” and I feel like this whole album has the feeling of that song. The album is called -9 DEAD ALIVE- I guess because there are 9 tracks and each track is dedicated to a specific individual including one song dedicated to Mother Earth (word!).

Inspirations for these songs include: Harriet Tubman, Antonio de Torres Jurado (greatest Spanish guitarist of the 19th century), Sor Juana Ines de la Cruz (17th century writer, feminist, nun), Gabriela Mistral (Spanish poet), and a few others. This is their first studio album as a duo in 5 years. If you are not familiar with Rod y Gab, then, my “I just got internet” friends, today you are reading the right article.

Quick history: “Mexico” Girl meets Boy — they start a metal band called Tierra Acida (check it out on youtube), band breaks up, Boy and Girl move to Ireland and become super popular playin in the streets/clubs/coffee shops, and pretty quickly they get picked up on European festival circuits and gained a huge fan base by performing this Flamenco/Rock/Metal/Percussive, highly-addictive flavor of nylon string sex.

Seeing the crowd go crazy for these guys like they were Metallica or something was a sight to see (amazing). Equal trade-offs, Rodrigo is like an Aztec Warrior of the gods with fingers that carry all elements and emotion through a precise weapon-like hand, plucking-tapping-banging-sniping and flicking, touching every cell in your body.

Gabriela, well, let’s just say I’m usually more into bass-player chicks, but this WonderWoman almost makes me cry tears of jungle rain every time I hear her play. She is the percussion — the rhythm guitar — sometimes lead guitar — and the heart and soul of this duo, while never leaving her guitar. Her style is so unique, old school, rarely seen, and takes a huge toll on her hands, which makes for precise touring so her hands don’t get too beat up. A kiss on the cheek from Gabby is on my bucket list for sure, all I can say is “Damn!!!” So go check out their previous 7 albums, and fall in love as I did.

9 DEAD ALIVE was recorded at their studio in lxtapa, Mexico by Fermin Vasquez Llera. There is not one skippable song found on this album. Definitely rated E for everyone, I give this album 5 stars — music like this will live forever in our hearts and ears. I’m so glad I found these 2 amazing souls, and I could go on and on about these guys so I hope I inspired a few to check’em out.

Much Love and Music!!! Untill next time. 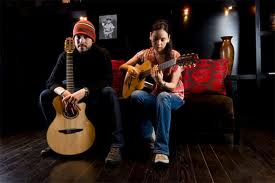 They will be coming to RED ROCKS AMPHITHEATER on August 17th, 2014 — I wouldn’t miss this opportunity get your ticket now, Taosenos!!! Also keep a look out for a documentary on the two, called “For Those About To Rock” directed by Alejandro Franco.

They also were featured in the “Pirates of the Caribbean” Stranger Tides Soundtrack with Hans Zimmer, which has some amazing pieces. 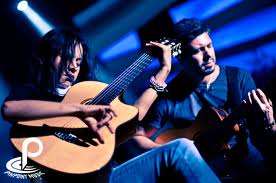