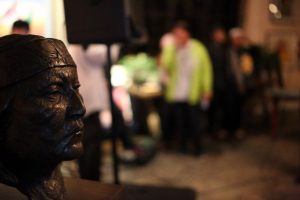 Recently retired Associate Director for Creativity & Culture at the Rockefeller Foundation in New York and previous tenured Stanford Professor Tomás Ybarra-Frausto’s seminal 1990 essay Rasquachismo: a Chicano Sensibility codified the Mexican and Mexican-American concept of rasquache (crummy) that has pervaded both cultures since pre-Columbian times and serves as its unifying theme across geographical borders.

What is rasquache? According to Ybarra-Frausto, an “outsider perspective that stems from a funky irreverent stance that debunks convention and spoofs protocol. To be rasquache is to posit a bawdy, spunky consciousness seeking to subvert and turn ruling paradigms upside down — a witty, irreverent and impertinent posture that recodes and moves outside established boundaries.”

Rasquache’s one qualifying condition is poverty: to be down and out. What rasquache does, though, is takes “down,” and transforms it to, “down, but not out.” Contemporary examples of rasquache transcend racial barriers, going beyond its Mexican roots into African-American, Asian, and Anglo cultures.

Jay-Z refers to it as “being on his grind,” which is nothing more than a response to one’s relationship with getting by on a daily basis.

Employing the act of rasquachismo, or being on your grind means holding it all together with spit, grit, hustle and flow…what Ybarra-Frausto refers to as movidas, coping strategies used to buy time, work options, angles. 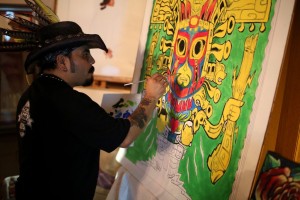 Rasquachismo is also the totality of one’s movidas: all the resourcefulness and resilience for coping with what life throws at you on a daily basis.

It happens for all lower-class neighborhoods regardless if their referred to as “the hood,” “el barrio,” or the trailer park. The old adage, “necessity is the mother of invention” is muy rasquache, and applies to all cultural examples.

Current West coast rap culture has its roots in the rasquache world of Los Angeles, where bloods and crips came to notoriety alongside vatos locos and the disenfranchised pachucos, low riders and immigrants of Southern California.
Indeed, the past fifty years have witnessed a particular Southern California version of rasquache, as the term makes for easy hybridizations, juxtapositions and integration, its modus operandi using what’s available in the immediate. It’s a hand-to-mouth philosophy that chooses not to ignore failure and pain, but rather to embrace it and accept it as inevitable.

A couple months back I was kicking it at my bro El Moises’ gallery in downtown Taos, having one of our “mental menudo” sessions (brainstorming periods where we voice coping mechanisms, gripes, hopes, and visions), when a print of a portrait Moises had done of the Mexican comic Cantinflas emerged, prompting a fond recounting of his bawdy, groucho-like collection of films and what they mean to the Mexican conscience, when I was suddenly reminded of an essay I’d previously read by the Mexican-born Jewish art-and-social critic and writer Ilan Stavans entitled “The Riddle of Cantinflas,” wherein Stavans describes the actors ideal rasquache perspective:

“He’s slightly abusive, often disoriented, never totally happy, in total control of la peladez (his ability to survive through his wits), with irreverence that at once highlights and eases the tension between upper and lower classes in Mexico.” 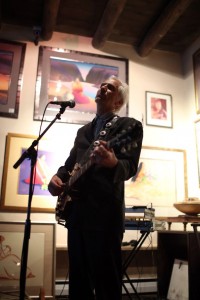 Dave Costanza of Art of Flying

The conversation between Moises and I got cheery as we started laughing about particular Cantinflas movies and relishing in his irreverent stance, getting nostalgic about such a perspective and wondered where the local versions of rasquache were to be found, but were hard-pressed to come up with examples that displayed the inventiveness and quick-wittedness of the likes of Cantinflas.

As we talked through all the different angles rasquache can take, we invariably thought of its role in the world of Art, which reminded us of the swagger inherent in the attitude of late Navajo painter RC Gorman, providing one with a memory of RC in his later years strutting along with his cane and trademark bandana in the dining room of a fine restaurant while onlookers all took notice, like some Navajo Cantinflas, prideful of his rough edges and idiosyncrasies: poised for subversion at any given moment.

Moises mentioned he and Gregory Farah from the RC Gorman Gallery recently had discussions about presenting Moises’ work at RC’s when we had a simultaneous eureka moment where we realized we could throw down several movidas simultaneously and pay homage to, as well as create an environment of rasquachismo…aqui en Taos. 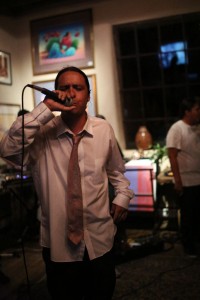 A couple weeks later we had a sit down meeting with Gregory about the logistics of getting the space and what a rasquache event would look like. He listened thoughtfully for a couple minutes before exuberantly rattling off a series of ideas he had and we knew we had our perfect partner.

The stories that have survived over the years about parties at RC Gorman’s house and studio on the idyllic adobe lane of the Ledoux neighborhood in Taos are legendary and can only confirm the artist’s place in the annals of Southwestern rasquachismo.

But beyond the concept of rasquache, and further in the annals of time, is the concept of the coyote — perhaps the original American rasquache figure.
Trickster, outsider, schemer…the coyote holds a venerable place in Native American lore and RC displayed many of his qualities, gaining a reputation over the years for just being RC. His Navajo roots and reservation attitude were imbued with their own particular blend of rasquache, but were comprised of the same stuff Cantinflas portrayed on the screen: inventiveness in the moment via a quick and sharp wit, using whatever’s at hand to create a tableau of vivid biculturalism, and the use of bright, oftentimes garish color.

The art of El Moises conveys the same principles with contemporary imagery and we wanted its live creation to be part of the event, lending an element of temporality, a major component of rasquache art. Presenting a painting in its infancy with its bones laid bare for the crowd seemed a natural thing to do, in order to provide a fleeting glimpse of what the painting is at that moment, how it’s done and with what techniques: a peek behind the curtain. 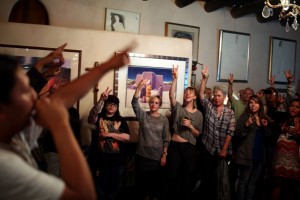 Put your hands in the air

The idea was to bring to life images and icons that influence and inform the artist’s gestures and decisions. To that end, I thought it would be interesting to have a Cantinflas film playing without sound to let the visual fabric be representative of the interior narrative of Moises, as well as part of the moment, i.e., a show and tell.

I left Moises’ place with a head full of ideas and went home to e-mail the Live Taos guys to see if they had a screen and projector. They answered “yes,” and when I told them about the idea of having a night when we could just Hang at RC’s old place and party down like in the days of yore, they were immediately down.

As it was turning into a party, it became evident we needed some music to fuel the affair — some live rasquache. The local hip-hop group PO10CEE came to mind, as I’d seen them last year at the Live Taos music fest and thought it was muy rasquache for a group of Taos Pueblo guys to be rapping. That it was at RC’s gallery seemed even more fitting, so we gave them a shout out to see if they’d be down.

A couple weeks passed and steam for the project came and went. Nobody had heard back from PO10CEE, and the idea of food entered the conversation with plenty of options, but very little in the way of resources.
Serendipitously, planning for the upcoming Orale! show, which is essentially a celebration of rasquache culture and art at the Harwood Museum, was in full swing, and as I found myself discussing the details of it with local artist and Mezcal négociant Ron Cooper, I discovered he was to be part of the show. As Moises was helping to curate and was in the show himself, it seemed a natural to bring these two forces of rasquache together for the RC event. 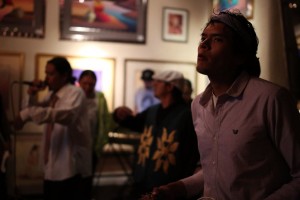 Ron Cooper’s been around Taos long enough to have personally been at several parties at the esteemed and notorious RC palace on Ledoux, so when I described the event to him, I could see a far-away look in his eye, and several moments later he’d agreed to help in any way he can.

Knowing I had an ace in the hole, I approached Noah Pettus of Aceq restaurant in Arroyo Seco about catering the event, as his food and restaurant are built on a local and somewhat counter-cultural rasquache vibe, and he was immediately into it.

One evening about a week before the event was to take place and I was resigned to playing a mix of music from my own collection, I got a telephone call from Michael Bozzuto of PO10CEE just after suppertime.
“Would you be down with doing a show at the RC Gorman Gallery?” I point-blank asked.
“Totally,” he immediately replied, and that was that. 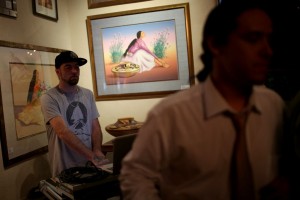 The night was rapidly approaching and I was scratching my head, trying to figure out a killer punch recipe that would prove equal to the task of Aceq’s food. People were flaking. There was a flux of energy alternatively pumping life into, and sucking it out of the whole affair. I called Moises to confirm a few things a couple nights before and took the phone call as an opportunity to bitch about the details.

He just calmly sat on the other end of the line while I went off on a tangent, succinctly saying at the end, “None of that matters. It’s going to be what it’s going to be, just relax and let it all happen,” making me feel like a barking Chihuahua.

The night of the event was nigh and everything was falling into place nicely. PO10CEE showed up early and ready to rock. Noah showed up with smoked trout mousse, bacon-wrapped dates stuffed with blue cheese and roasted beets with goat cheese. I’d managed to concoct a lemon-lime punch with orange juice and pureed fresh cucumber. Dave Costanza from the local group Art of Flying agreed to perform after PO10CEE, Devin Meyers signed on to spin as DJ Magic, and the RC Gorman gallery staffed for the evening to help out with loose ends.

A couple hours later I was nursing a cup of punch, full of Aceq food and throwing a peace sign in the air at the behest of PO10CEE, along with everyone else in the crowd that was feeling the infectious vibe of rasquache. 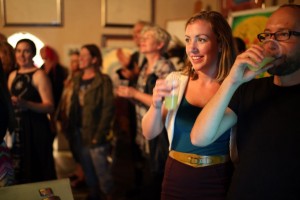 I gave Moises a high five and peeked at the Cantinflas film playing on the loop, reflecting on all the movidas I had to throw down just to get to where I was at in the moment.

The smiles on faces across the room, some Pueblo, some Hispanic, some Anglo seemed proper due for said movidas, and at that, I breathed a huge sigh of contentment, thanked the powers that be and raised my glass to a bust of RC Gorman that seemed to be stoically and majestically watching the whole affair, content to be the centerpiece of such a moment in the history of rasquache.