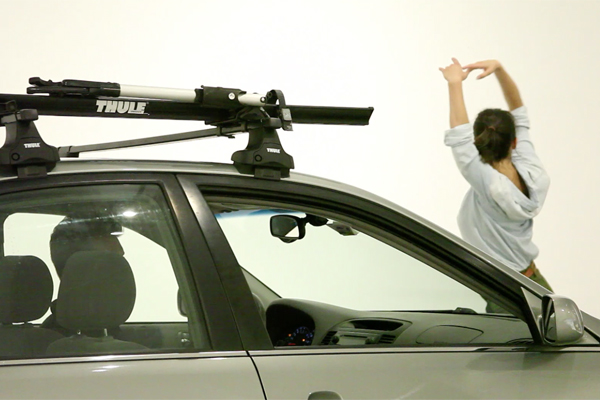 Elizabeth Orr took a break from working at her studio in NYC to chat with me about Taos, and about cars.

Now thirty-two years old and earning a living piecing together freelance and her own work, Elizabeth has been coming to Taos since she was a kid. Her father, Eric Orr, had personal and professional connections to Taos. As an artist of unlimited mediums, Eric Orr’s work had a profound impact on the Light and Space movement of the 1960s.

Even after her father’s death, Elizabeth maintained close relationships in the area. It was at the encouragement of family friend and local filmmaker Melissa Howden that she applied to participate in this year’s Paseo festival. And so, equipped with a B.A. from Hampshire and an M.F.A from Bard, Elizabeth returns, eighteen years after her father’s passing, to make her own art in Taos.

Elizabeth’s Paseo piece, “Car People,” will be comprised of projected work featuring a live feed of traffic in town, and a series of video portraits of Taos folk and their cars. She’ll make the video when she arrives in Taos, a little closer to The Paseo.

I asked Elizabeth what I thought were the appropriate leading questions; “how are you going to select the people who will be in your video?” “what do you think your project will reveal about Taos’ car culture? Is it a divisive culture? Or one that unites the town?” After politely listening through my second “probing” question, Elizabeth stopped me to zoom the lens out: “I don’t have a narrative. There’s no thesis,” she said. “It’s just people with their cars. People will get to see people they know.” For Elizabeth, it’s a fun and light-hearted way to engage the community. And as for who she’ll be filming… “anyone that wants to participate.”

It’s really a project you could do anywhere, she remarks. But she believes that Taos will make for an especially diverting study in the relationships of people to their cars: the long distances, the high volume of driving that comes from rural living, the local collector culture. And as for the event itself, she says she’s enjoyed thinking about how to orchestrate her projections for an outdoor, ambulatory audience—no doubt a change from the close confines of a New York City art gallery.

I’m excited about “Car People” because even with just the premise of the piece I’m already having ideas, remembering stories: jacked up Chevys with matte paint jobs and post-apocalyptic pilots, scruffy Subarus covered in zany bumper stickers, Toyotas and Volkswagens with one foot in the grave, NRA stickers on old Fords, disabled veteran license plates on all sorts of models and makes. I think of the late night races down the southside of Paseo, of seeing beer cans smashed on windshields during especially volatile road rage episodes, and a truck idling menacingly at a stop sign on the mesa.

And of course I think about my own green ’92 Subaru, the car I drove to Taos in, with its choose love bumper sticker that I hope reminds people of John Lennon but that I worry gives off the stench of a mindless new-age liberalism…

Catch Elizabeth Orr’s piece at the Paseo and see what it conjures up about your own vehicular relationships. Learn more about Orr at her website.

Learn more about The Paseo at www.paseoproject.org, and save the date: September 23 & 24, 2016. Stay tuned to LiveTaos and KNCE 93.5FM, www.truetaosradio.com, for ongoing interviews and coverage!