Robert Dean Stockwell, internationally known as Dean Stockwell, opens a solo art show at El Monte Sagrado’s Grand Bohemian Gallery this weekend. The show, “Collages and Bones,” will hang through July 14; there will be a free opening and reception with Mr. Stockwell and others on Saturday, May 31st from 5 – 7pm.

We also sat down for a chat with El Monte Gallery Director and show curator Jennifer Longo, along with longtime Stockwell family friend Robby Romero, who have been working together to put up this show of Robert Dean Stockwell’s Art.

LT: how did this show come together?

JENNIFER LONGO: Robby came into the gallery, and he mentioned to me that Dean was here and all of his artwork was just sitting in his house. I’ve been studying Dean’s art since 2004, maybe 2003. Back in Brooklyn at that time there was a lot happening on the forefront of anarchist art, surrealist art – we were still fresh out of 9-11, and there was a lot going on on the artistic/politcal front, so Dean’s artwork surfaced. Studying him, and seeing that kind of alternate mind – using art to break open your head – was something we were all craving. So when I heard that Dean’s art was sitting in his house, I thought, my goodness, this needs to be out! There was this mutual lightbulb that went off: “Not even a question, of course Dean should have a show here!”

LT: Forgive my ignorance: is this his first public show in Taos?

ROBBY ROMERO: No, he was involved in Hopper at the Harwood in 2009, and he’s had some shows in Santa Fe. [Editor’s note: Stockwell’s works have also been exhibited locally at R.B. Raven’s galleries in Ranchos de Taos (2004) and in downtown Taos (2008)].

For me, I got turned onto Dean’s art when I was a kid. I came to Taos with my mother, and I stayed at the Mabel Dodge House with Dennis [Hopper]. We eventually moved into the Tony Luhan house, and there was a piece of Dean’s that hung there. I used to sit and stare at it all the time – it really captured me. It was a very intriguing and mysterious piece to me. I was a pre-teen then, but that stayed with me all these years. 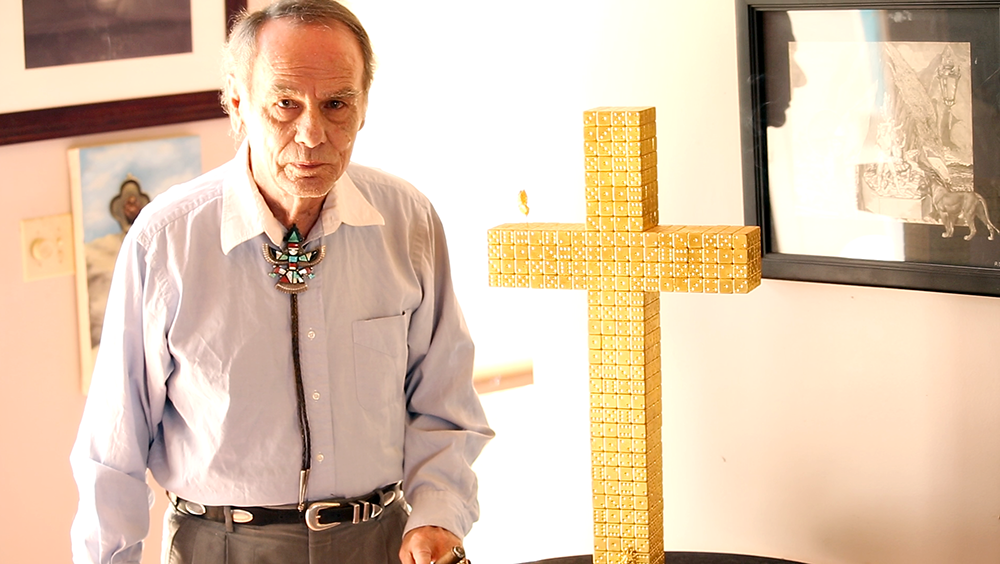 LT: What is it about this space that fits the bill?

RR: Well, Dean has these dice pieces he’s been creating, and to me they’re bizarre. And incredibly intriguing. They have this magical quality to them – I’ve never seen anything like it. So what’s special about this place, is that in Dean’s home he has a plate glass window that looks right out at the Sacred Mountains. Gorgeous view. And he has some of the theater pieces in front of that window. And the window’s facing north, and even with that light you can see through some of these dice pieces. Especially the theater pieces and some of the crosses.

So when I saw the plate glass window here facing the west, which captures the gorgeous sunsets of Taos – and the lighting in Taos is a special thing. It’s probably why most artists are – maybe not drawn here, but stay here. And because of that that room just totally works. I thought it might be too small for all of the collages, especially those two special collections of collages, but the two walls actually were perfect for those.

LT: how has this process gone — is it mostly Dean self-selecting works?

RR: I think Dean is very modest about his work. His influence into this process has been very beautiful. He’s kind of like a little boy right now, very excited about it, and I’m so happy to see him inspired and creative. You know, he’s been doing this for a long time, so it’s a thrill to see him showing his art to people other than his friends.

The stories behind the creation of his art are fascinating. You know, what’s going on in the artist’s mind, and why he’s creating them – and Dean’s are very specific. There’s a brand-new piece in there that’s completely different from anything else. In fact, I think it was made during the process of selecting pieces to bring here. So that’s what I mean – he’s inspired. He’s got so much more to share and to create. 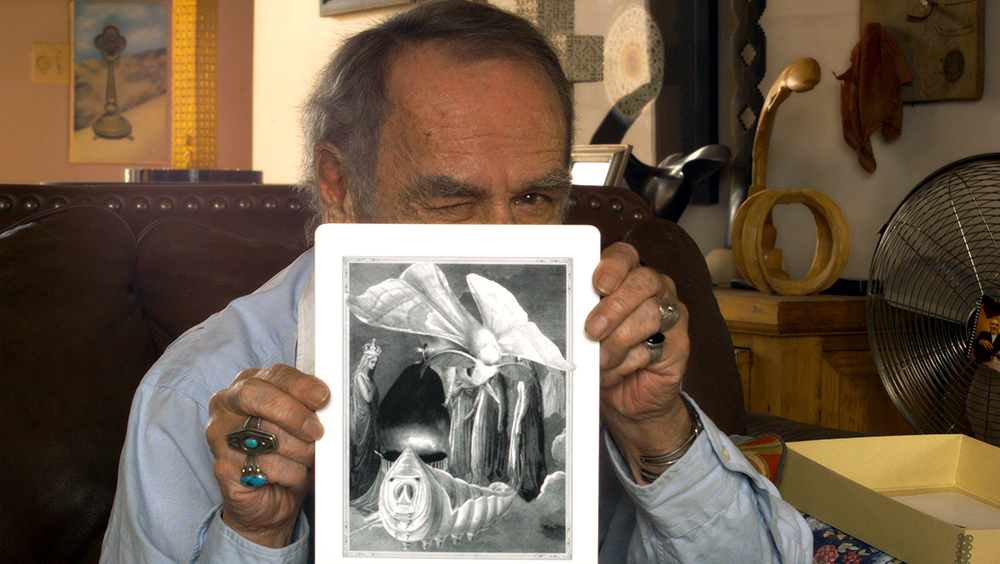 LT: It also sounds like he has an enormous collection, untapped, at his home.

JL: His repertoire is phenomenal. We could have had the opening in his house. He has such a body of work that you can really dive into his mind, and know so much and yet probably so little at the same time, just by looking at them. It’s really mind blowing to see how much work. And to know how much time and effort he has put into each piece. On a technical level, the skill set that he has to create these pieces, sitting there with an Exacto knife, the ability to create these impeccable lines freehand – it’s simply astonishing. Then to tell a story with them…

RR: And on top of that the printing ability – everything is created right from his own studio, the prints, everything. It’s all a creation of Dean, from start to finish.

I think that the admirer, or collector, or art-goer – whatever you want to call people who are into art – they need to actually experience the show WITH Dean. Because then you’ll get the behind-the-scenes, behind-the-art take on what this artist is thinking. And of course it means something different to everybody. Some of these pieces you could look at one day, and the next day it means something completely different to you. Like the piece when I was a child – that kept changing, in my mind, what it meant to me and how I was perceiving it, as I was growing up. If you spend time with this art, and you spend time with Dean, you start getting a much deeper sense of what he’s up to as an artist; and then from there, one’s own perspective can run wild. He’s just as important to the show as anything in there. 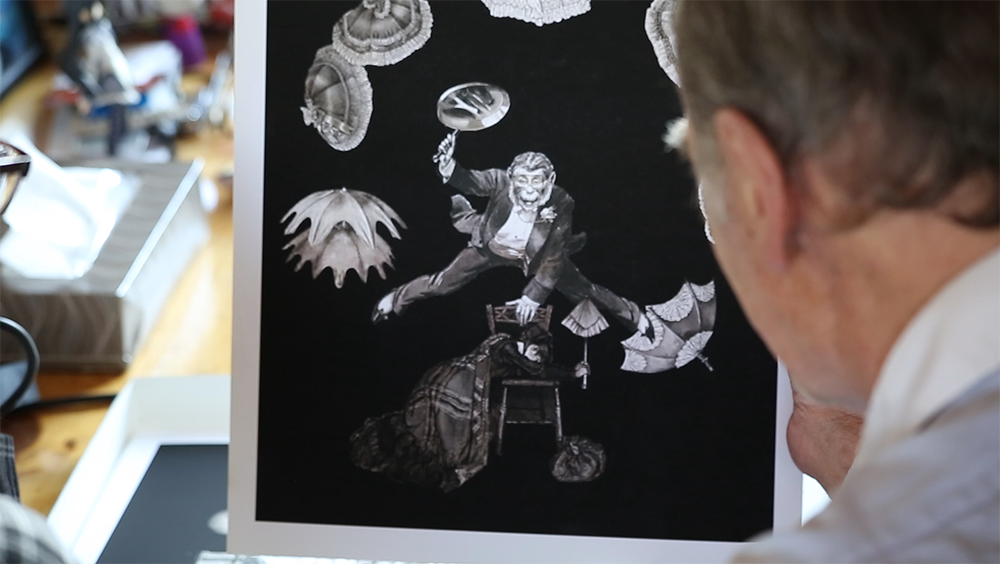 LT: How do you expect this show to be received in the Taos art culture?

JL: I’m hoping – and this is one of the other main reasons I wanted to do this show so badly – that it’s going to inspire a whole new generation of artists to think out of the box. I love Taos art, I absolutely love Taos art – but it’s common to see “traditional” Taos art everywhere. Landscapes are beautiful, everybody’s here for the sunsets, and it’s gorgeous – but there is a dark side of Taos that is what drew me here from where I was living at the time. That was the one thing I knew: that there was this bizarre, askew darkness that existed, that I felt needed a little bit of a probe to crack open.

People I’ve brought in for little sneak previews are walking in going “What is that? I haven’t seen anything like this before…!” and I think there are going to be a lot of people who want to start seeing this exist more often throughout Taos. Just to have people think outside the box, not be afraid of seeing something that’s bizarre, or grotesque, or weird – a bit more off the deep end.

LT: Is that the direction you hope to take the grand bohemian gallery, in general?

JL: I’d like to balance it out. I don’t want go go too far off that it scares people – because that can happen, too – but to keep a good balance. There’s an equal and opposite reaction for everything – Newton said that, and it was proven to be true. There needs to be an alternate side that’s opening up, to get people out of their heads.

RR: Dean speaks about this all the time  – in fact, daily – about the mystical magical power of Taos. And I think the darkness she’s speaking about – that thing – this powerful light here in Taos touches that, too. I don’t want what she’s saying to be misunderstood as if she’s speaking of some dark negative or gothic energy. It’s this powerful light in Taos that has drawn so many actors, and artists, and musicians, and creative people, as well as just others who’ve lived here for so long. It’s why they stay here, why they love it – this place IS art.

If you walk out onto the Pueblo, or if you walk out onto the Mesa, or if you walk out into the sagebrush or into the mountains, that’s living, breathing art. And that light is all of us, and all of that is what really touches Dean’s work and inspires Dean’s work. And I think that’s why he’s here, and has chosen to stay here. It’s much more powerful than any of us, or any kind of category. It touches all categories and all people and all lives. That’s the most powerful thing here in Taos.