During the amazing summer months in New Mexico, I am graced with the opportunity to play music during evening gallery openings on Canyon Road in Santa Fe. During breaks I often wander in and out of some of Santa Fe’s most-esteemed galleries and often get to meet the artists. I have grown quite fond of many of the regular artists. Some bill themselves as contemporary artists, which technically is true… they are making art, and it is after World War II.

But I prefer to think of contemporary art as being much more cutting edge than painted portraits of sexy cowgirls — or better yet, sexy paintings of cows. (It turns out that paintings of cows sell extraordinarily well.) If it is billed as a contemporary show, everyone leaving the gallery should be scratching their heads, asking, “Did any of that make sense?”

This is where the Taos art scene comes in. It’s about damn time a gallery in the “bustling” art town that Taos claims to be is featuring artists making some weird art. Greg Moon Art in Taos is running a fantastic show from March 9th – 27th called High Art/Low Brow.  Everyone should take twenty minutes to visit this gallery (which you might not even have known existed).

Rita and I were lucky enough to make it to the opening night reception, where we got art’s version of the Full Monty. Here are some of the highlights of our visit:

Think of: Rembrandt getting stoned, watching the three original Star Wars, followed by the original Planet of the Apes, and creating a candlelit world where the characters all live in confused harmony.

I have known Conrad for a while (full disclosure: I play music with him). He is a phenomenally nice guy who wears great hats and makes art I don’t ever expect to fully understand, but I THOROUGHLY enjoy it every time I get to stand in the same room as one of his pieces. Website: conradcooper.com 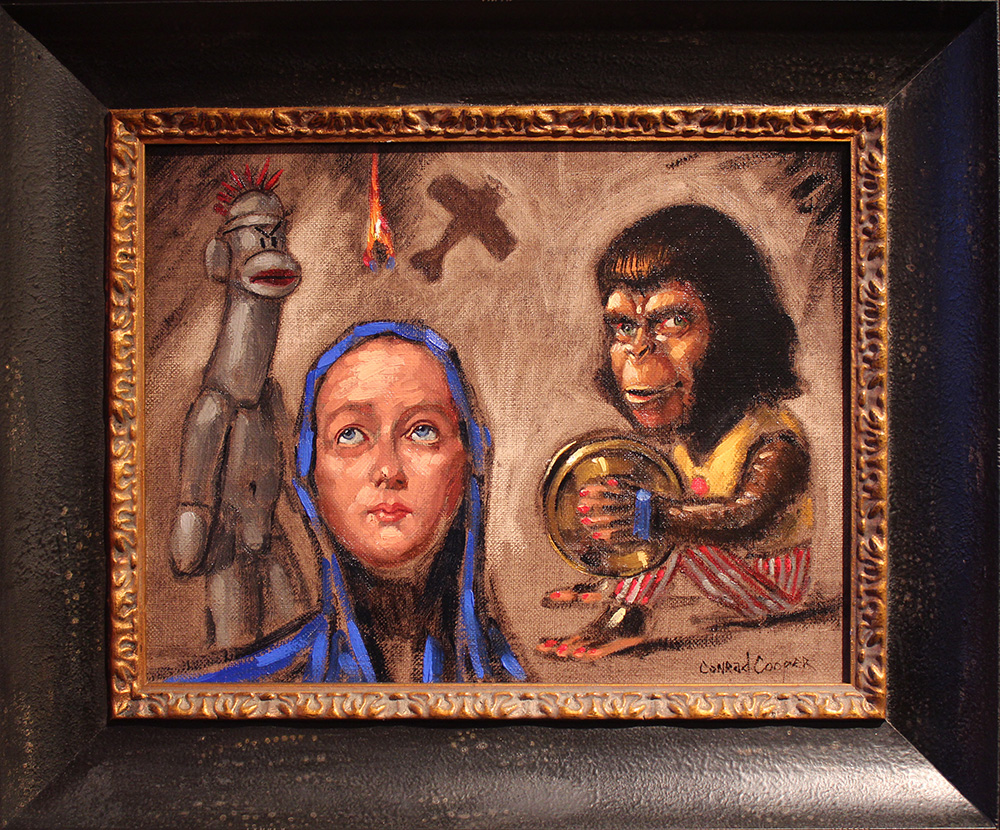 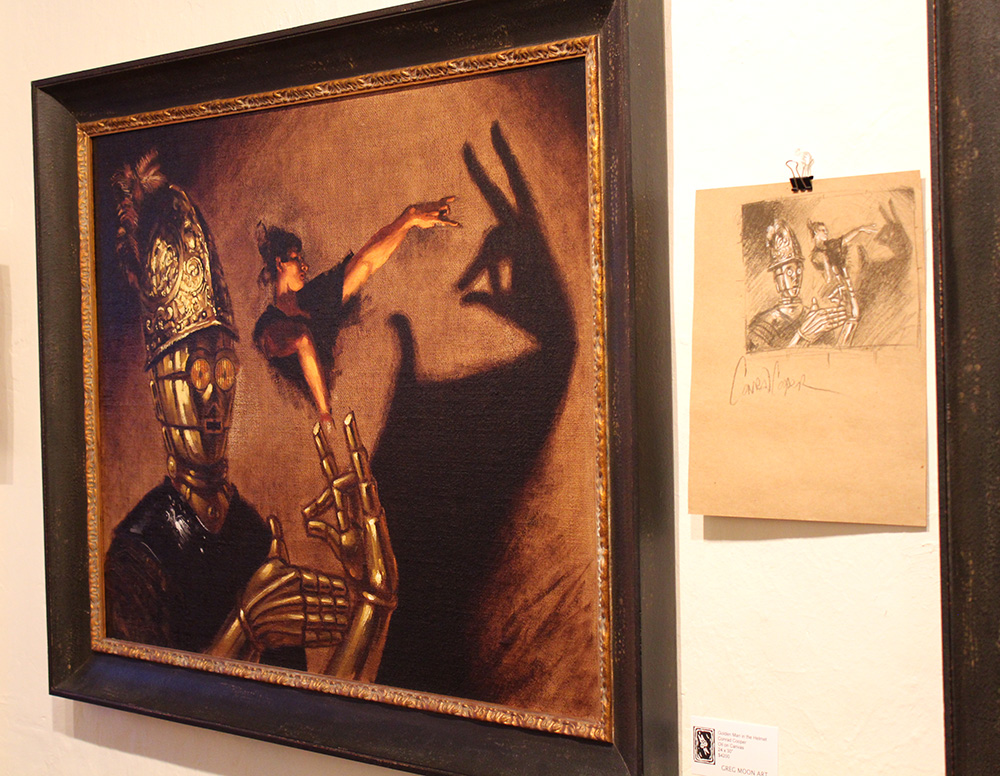 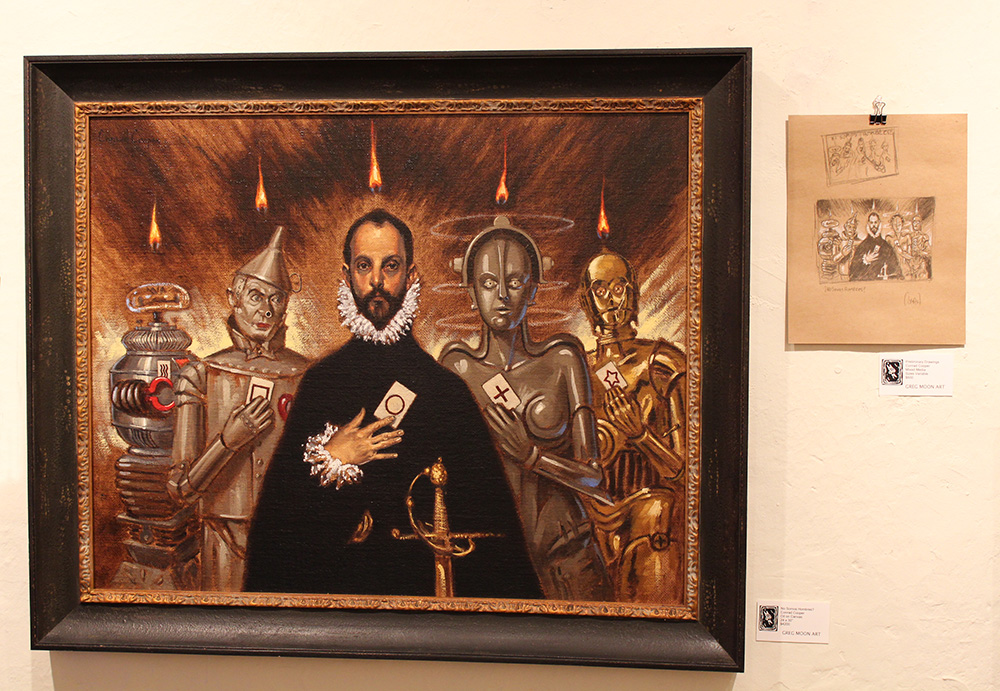 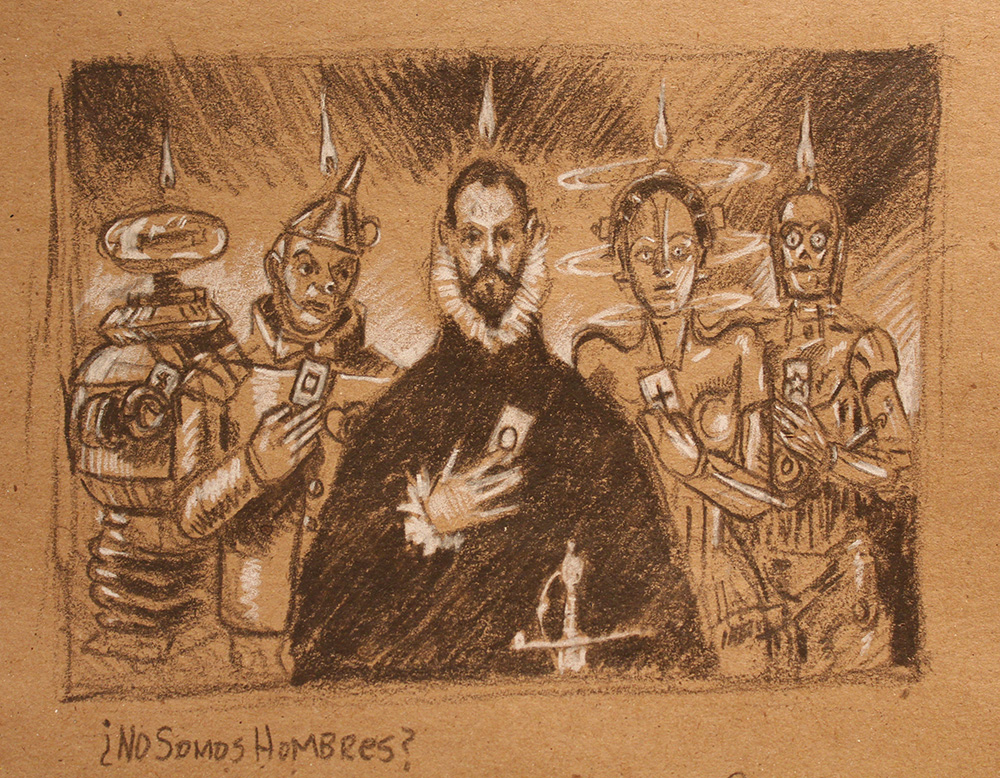 Think of: The space age envisioned in the 50’s as a terrifying and vivid acid trip.

I don’t know Dennis, but I know many great people from Kansas so by association we will assume he is a good guy. I was blown away by the color and style of the paintings when I saw photos online, but there is NO WAY to describe their true intensity. It turns out that all of his paintings in this show are built on a few millimeters of foam rubber, to create a 3D canvas. The work is visually stunning, very approachable, and even if you don’t like it, I think you will be impressed by it. Website: startlingart.com 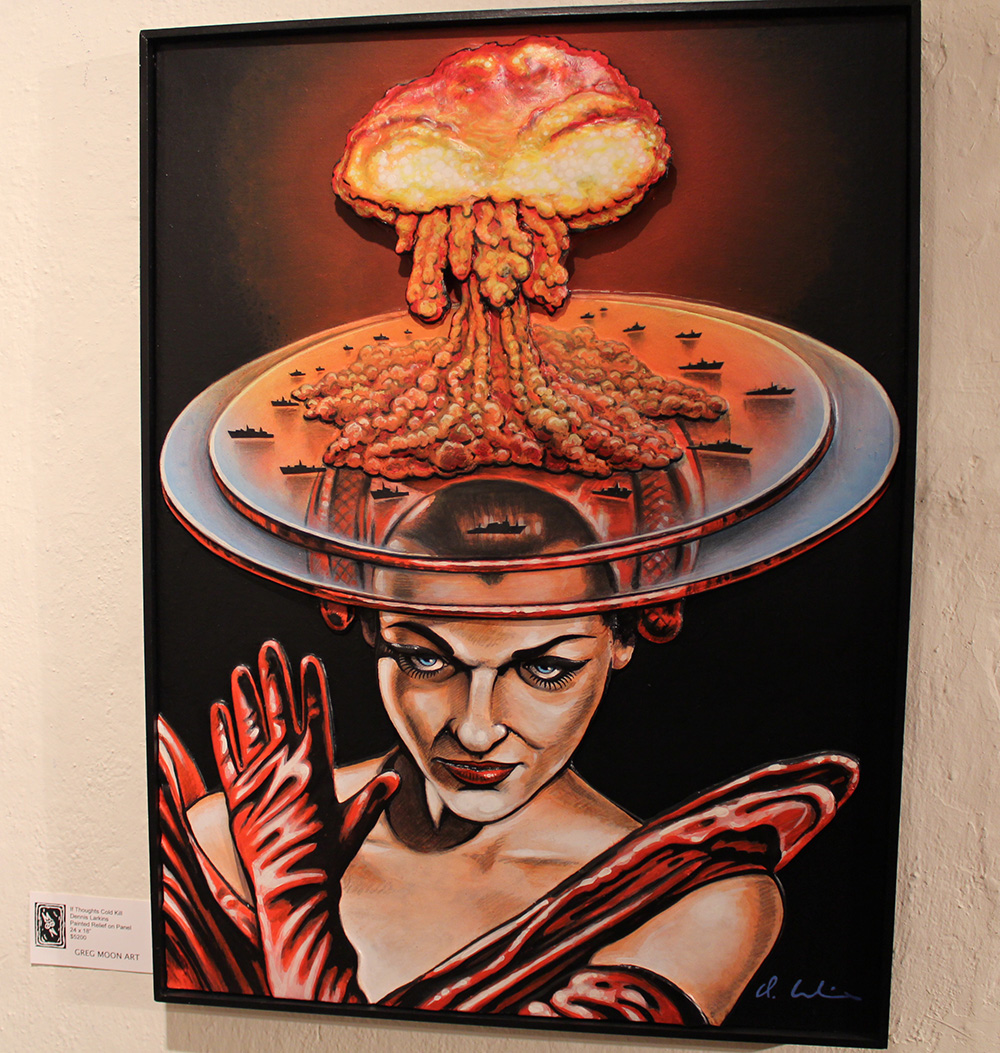 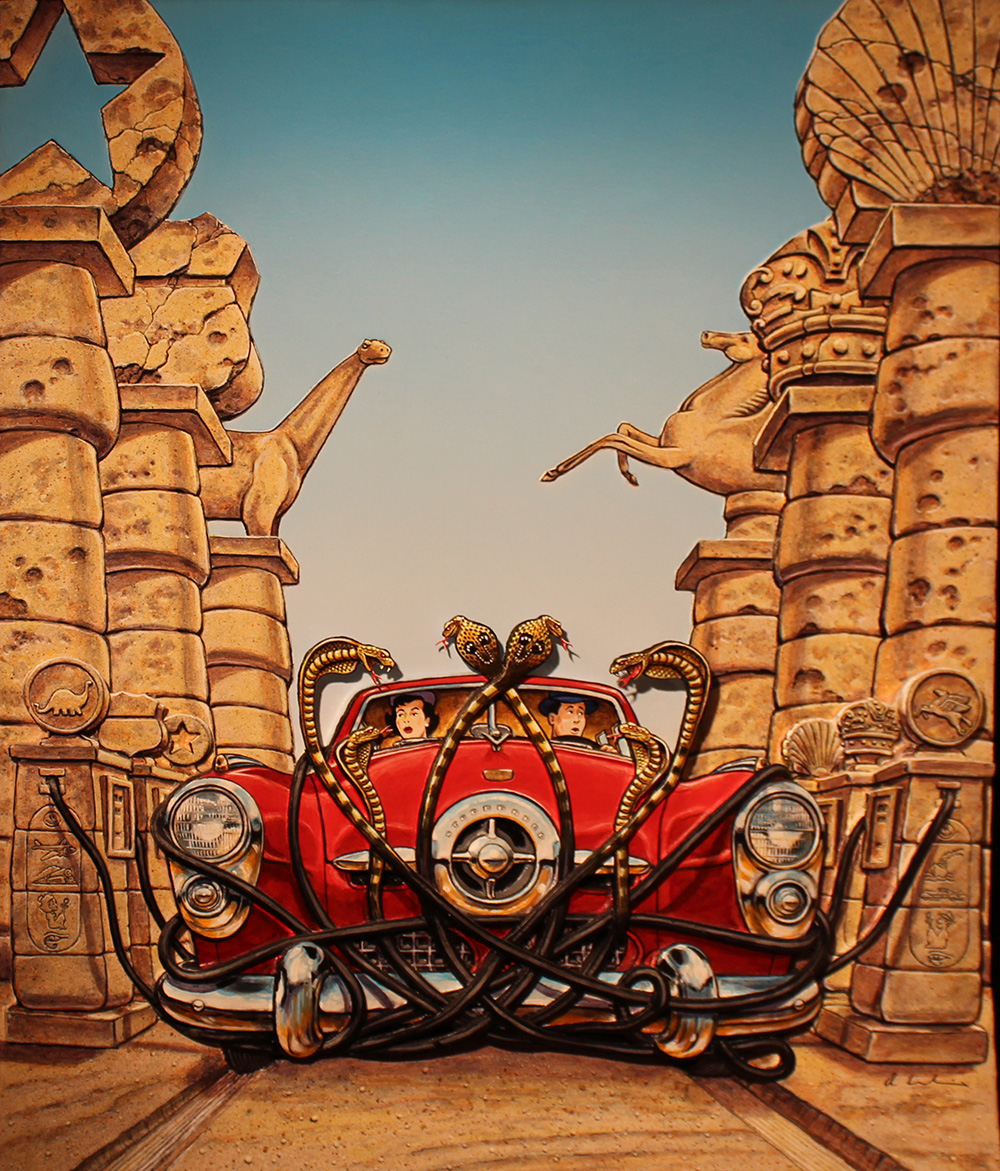 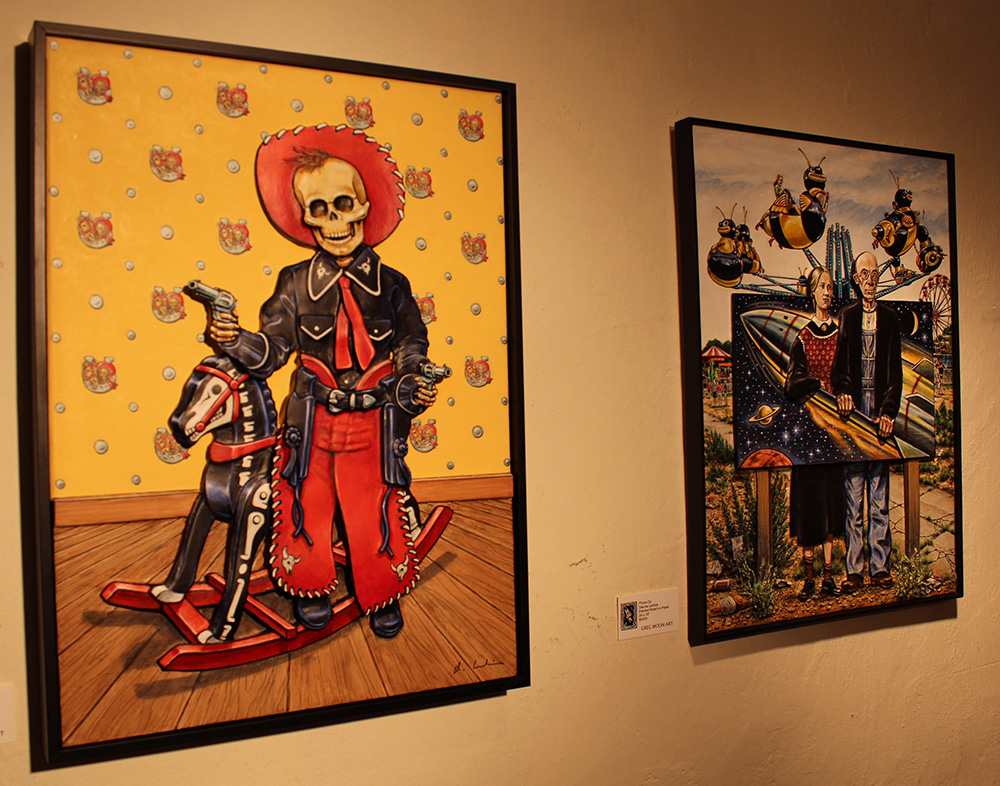 Think of: Sleepy evenings basking in the glow of a Very Happy clown, or finally having an acoustic guitar that doubles as household protection.

I was speaking with Live Taos author Maxwell Tart and he mentioned Esteban’s guitars. Someone at the opening suggested that he play a song or two, but it turns out that the instruments are probably better off being enjoyed by the eyes not the ears. That should not be taken as an insult, they are clearly incredibly work intensive and quite spectacular to look at. He also does some other mixed media — his clown lamps are quite intense, and I hope he can get El Camino to feature a few of them. Website: estebanbojorquez.com 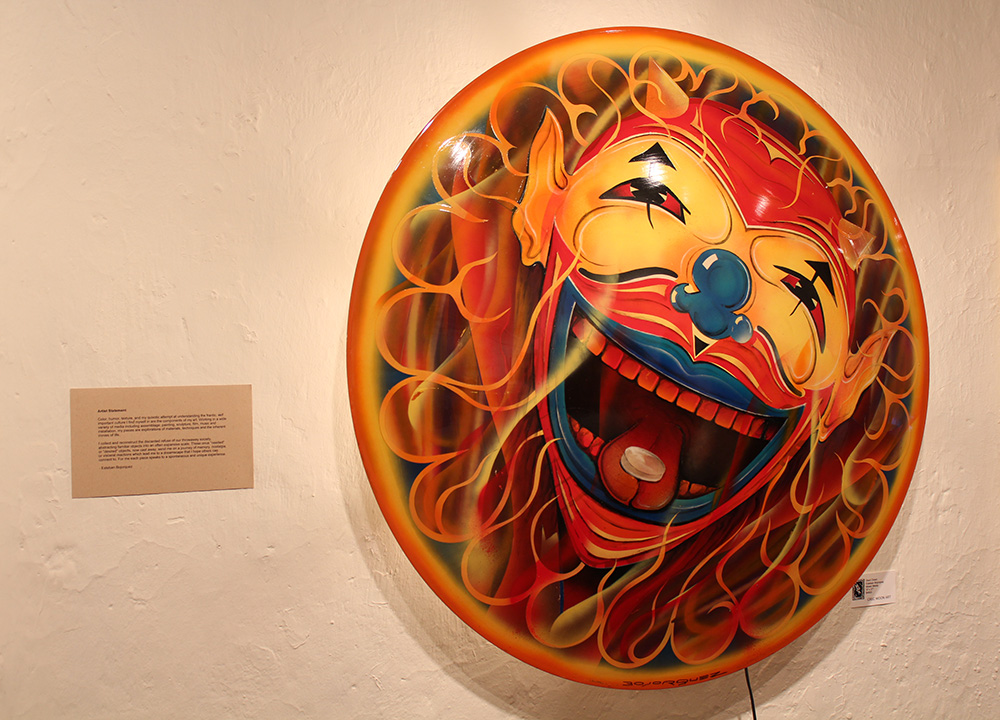 Those are three artists that were the brightest and hence the most memorable for my “undereducated in art” mind. There are still some other fantastic artists like Jeffrey Brown, Todd Christensen, Libby Macalister (owner of FX18), and of course Greg Moon (the gallery owner).

Seriously, get off your ass and go check out some cool art. And even if you don’t get it, you will be right next to the Taos Inn and you can go drink your confusion away. 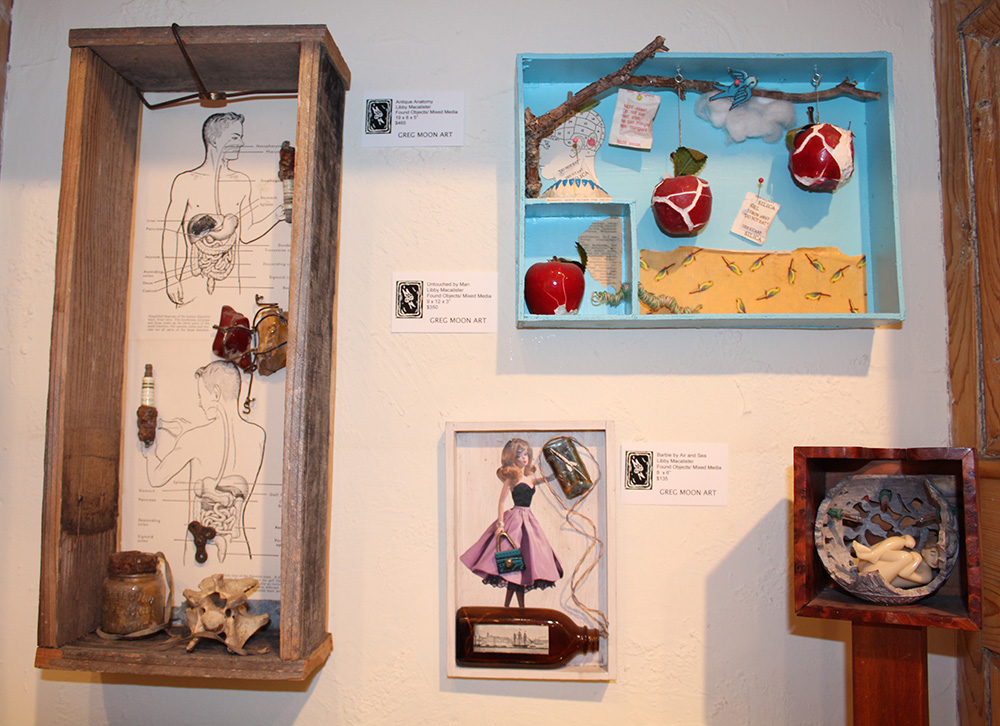 As a side note: I recently visited the California College of Art, where we had a personal preview of an upcoming art show. The main installation was probably the most baffling piece of contemporary art I have ever seen. Not only did I scratch my head when I left, but I don’t expect to ever understand what I saw… that is what I want out of a contemporary art show.

Although, now that I think about it I bet I am confusing contemporary with Avante Garde… Oh well you can do the review next time. We are still looking for contributors — email us at [email protected]