So, you finally ran out of Walking Dead episodes to watch on Netflix, and you’re thinking you might want to hit the town? Unfortunately there are no hi-tech indoor laser tag arenas where all your friends can hunt each other through dark obstacle courses while electronic music plays from the ceiling. Maybe one day. So if you’re sitting alone in your house polishing your battle axes and collecting cans of Spam, waiting for the zombie apocalypse to finally start so you can head out in your camo cargo pants and kick some ass, I think it’s safe to say, You don’t get out much, friend. So let us guide you.

I’m a big fan of this place — the beautiful ammonite-studded bar top, the enormous backyard where patrons gather around firepits to smoke cigarettes and star gaze — and let’s not forget the wide range of home brews on tap go down smooth and NEVER leave you with that queasy bloated feeling you get with other less savory home-brews in town. The building has a solar greenhouse, a water catchment system on the roof, and was built largely out of re-claimed construction materials. A classic “green” mesa project, a real Taos experience. Like any other bar, the scene changes drastically depending on the music scheduled for the night, so check their calendar. I’ve seen everything from bumping Reggae shows to whimsical Irish drinking bands, full-on themed raves to country two-stepping nights. Pool tables, food on the menu, open til about midnight. 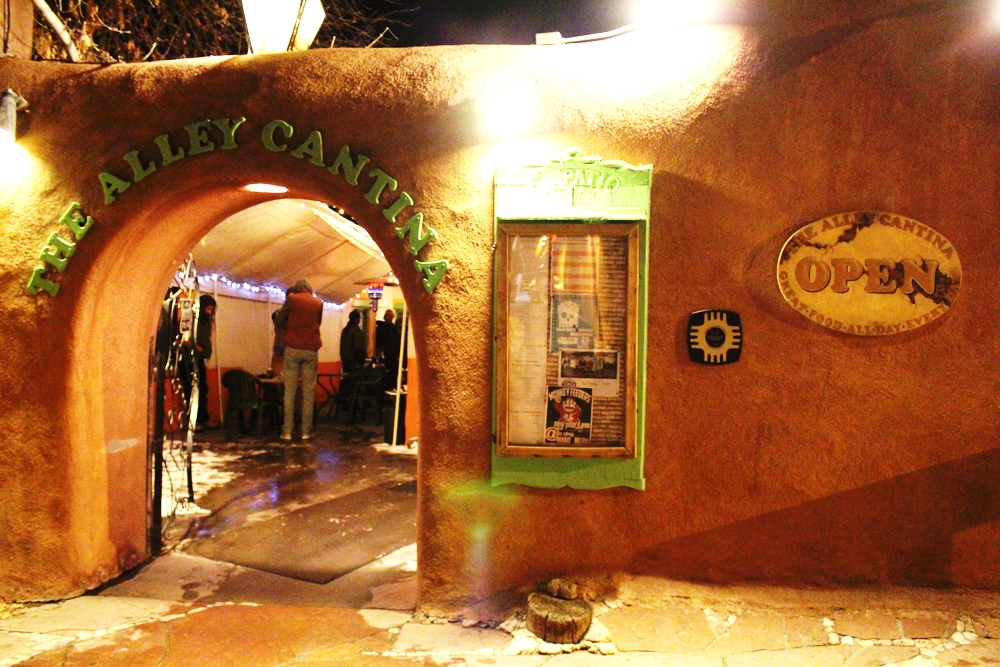 Best happy hour in town. 5-7 everyday, ALL the alcohol is half-off. Go toe-to-toe in a game of pool with the die-hard locals, swap witty banter with the cocktail waitresses, watch your favorite sports team on one of three flat-screen televisions. They’ll be as happy to whip you up a top-shelf margarita as they are to pop open a can of local IPA. Also, this place claims to be the “late night” bar in town, with live music every night, last call at 1am (except Sundays), and the kitchen open ’til 11. Say you’re out having the time of your life and you’re just not ready for the party to end- you can pretty much bet The Alley is open, the dancefloor is packed, and you get another hour or so before your carriage turns into a pumpkin.
On the other hand, imagine a horde of people who got hammered at the nearby bars and don’t want to go home yet. So here they come, the men bro-hugging like they just won the Superbowl, the girls tottering around on high heels like newborn deer, and they’re headed straight for you. It’s no wonder the bouncers have a reputation for being hard asses who err on the side of paranoia. It’s sort of the fun of the place, though. You never know what you’re going to get. And the bartenders are old pros who never short-pour. Bring a gaggle of friends, and expect a late night. Shuffleboard, pichenotte, pool table, dog-friendly patio. 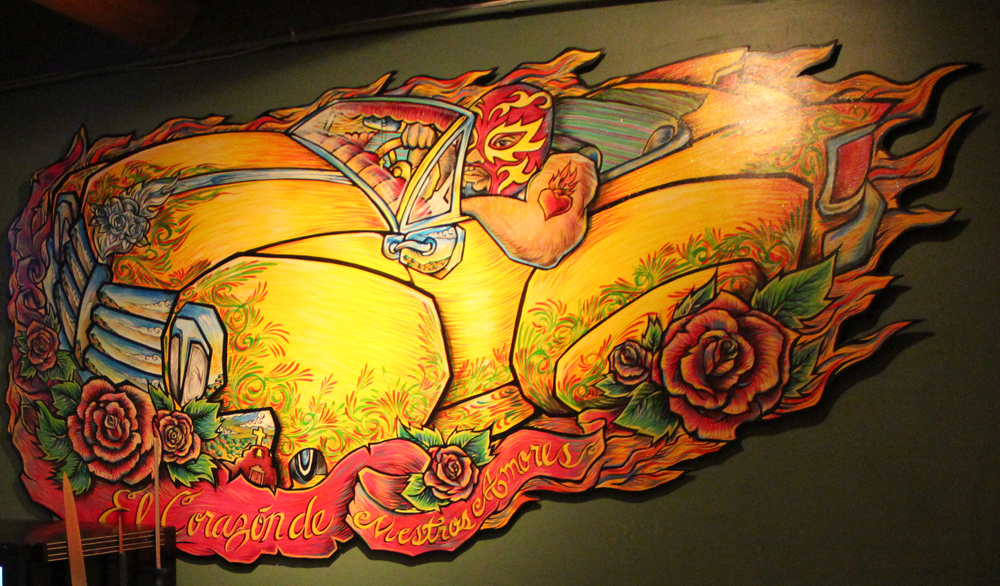 For a veritable hole-in-the-wall, this place is stellar. The patio overlooks the main drag in the middle of town, and there’s no better place to hang out in the summer and sip a “coco loco,” their killer take on the piña-colada. A huge glass vase of rum, pineapple, and real vanilla bean sits as a center piece behind the bar and is just as delicious as it is dangerous. Besides the full bar and some nice beer choices (both on tap and in bottles), they have an impressive menu of specialty cocktails, from cucumber, green chile, or prickly-pear flavored concoctions, to pop-rocks candy rimmed margaritas. These are tasty gems, go down quickly, and will leave a considerable dent in your wallet. Stunning contemporary urban-chicano artwork by El Moises dons the walls, and is a sight to behold in itself; that and the bench built out of the sawed-off back of an actual El Camino, so you can hang your legs over the trunk of the car and sip kiwi mojitos beneath a portrait of a gangster chihuahua wearing a bandana around his head, all while Notorious B.I.G plays on Pandora radio. If that’s not enough for you, try the shrimp ceviche. 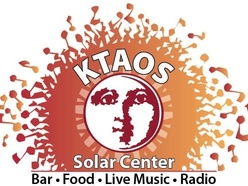 A solar-powered radio station, bar, and music venue. This is ultimately the only venue in town willing to dish out enough to persuade big-name talent to perform in Taos. So you, in turn, will be asked to dish out a decent lump of cash for the cover charge. To get the biggest bang for your buck, check the show schedule ahead of time and buy your tickets in advance. The dance floor is big enough to get your boogie on without bumping elbows, and in the warm months the outdoor stage is a blast to hang out beside. The shows are normally open to all ages, granted there’s a guardian present. There’s bound to be some wee little townsfolk children running around your ankles chasing glow-in-the dark hula hoops. The whole “family-oriented” bit usually makes for a diverse, fun-loving crowd. So go ahead and grab the kids, hit a Coinstar on your way with that mason jar of spare change, and have yourself some fun.