In Taos, we have a lot to be proud of. 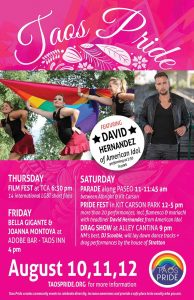 For one, how many small towns in America celebrate the LGBTQ+ community the way Taos does? Coming up this weekend, August 10-12, Taos Pride 2017 will set out to do just that. Thursday evening, August 10th, the Taos Pride Film Fest will kick off the festivities, 6:30pm at the Taos Center for the Arts. The following afternoon, Friday, August 11th, 4pm at the Adobe Bar at Taos Inn, both Bella Gigante and Joanna Montoya will entertain the crowd. Bella will give us her humor and incredible singing voice in her performance, and Joanna will belt out mariachi classics. It promises to be an incredible show. Then, be sure to clear your calendar this coming Saturday, August 12th, for the Pride Parade, 11-11:45am on Paseo del Pueblo Sur, Pride in the Park at Kit Carson Park 11:45am to 5pm, followed by the Gayest Drag Show Ever!, 9pm to 1am at Alley Cantina.

Have you ever been to Taos Pride?  Do you go every year, or would this be your first time? For newbies and veterans alike, it is especially important this year (since the November elections) that we show our support for the LGBTQ+ members of our community and allies by showing up for pride. This will be the fourth year for the Pride Parade. If you would like to participate, you are invited to the Taos County Courthouse parking lot (105 Albright Street) around 10am this Saturday morning.  The parade will proceed through town from the County Building to Kit Carson Park. If you would like to watch and cheer on the parade participants, be sure to stand along Paseo del Pueblo Sur and cheer between 11 and 11:30am.

More detailed information about Taos Pride 2017 is available at www.taospride.org.

In Taos, we can be proud not only of our LGBTQ+ community and allies but also of our vibrant local artist community. Indeed, sometimes, as with the Nocturne Variations multi-media event coming up this Saturday night, there is a collaboration between these communities. John Biscello, a local playwright and author, has written a novel entitled Nocturne Variations, featuring a 17-year-old transgender protagonist, Piers, who is a runaway struggling to overcome the past. The book is a combination of straight narrative, poetry, journal entries, screenplay excerpts, monologues, lists, and letters.

Biscello’s book will be brought to life through readings, live music, drama, shadow-dancing, film clips, and more, this Saturday evening, 7-9pm at the Body Shop, Taos’s newest dance studio and performance space in Cabot Plaza. The 7-9pm time frame on Saturday means that you can catch this multi-disciplinary performance in between Pride in the Park and the Gayest Drag Show Ever! and not miss a thing! Tickets are $10 each at the door; proceeds will directly benefit the Taos High Gay Straight Alliance (GSA).

Biscello shared how he got the idea for the event to benefit the Taos High GSA: He attended the 22nd Pecha Kucha night in Taos, which featured teen presenters at the Taos Center for the Arts on May 11th, 2017. When he heard the Taos High GSA leaders present, he felt it’d be a perfect and natural fit for his reading proceeds to benefit their student group, because of the theme of his novel, and because “creativity and supporting youth (and the two combined) hold a special place” in his heart. 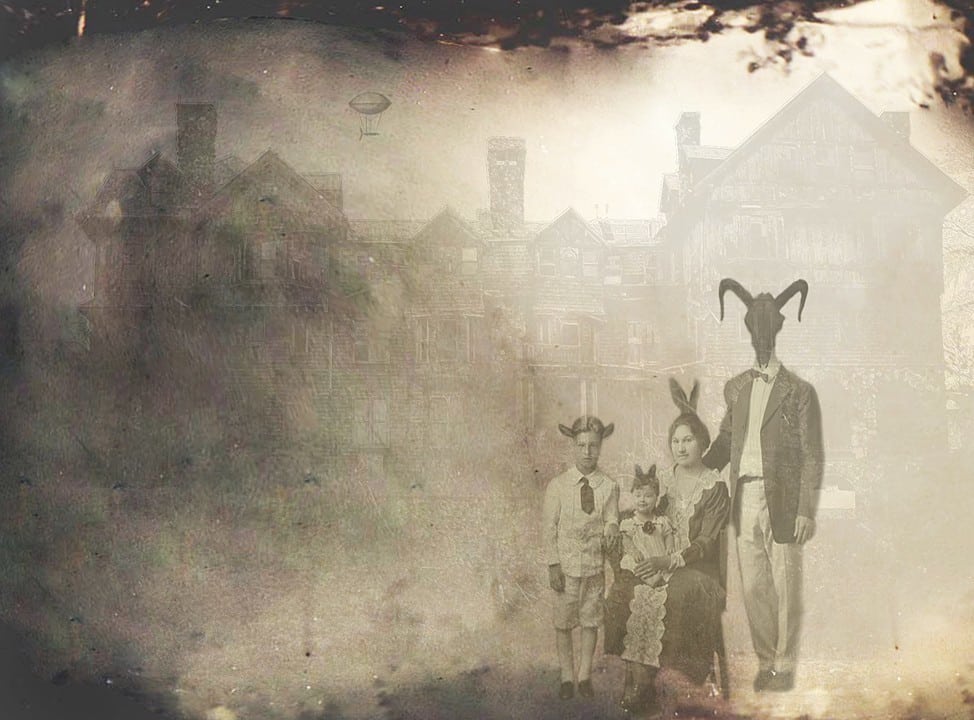 Each of these young women is motivated to lead the community around supporting the LGBTQ+ community. They not only presented the Taos High GSA at Pecha Kucha in May, but they also are taking initiative to organize a student group for the Pride Parade this Saturday. Plus, they are collaborating with LGBTQ+ youth and allies interested in performing in the Glam Trash upcycled fashion show coming up in Taos September 2nd.

Taos High GSA will also be out in full force on Saturday at pride. They will participate in Pride Parade and then share a table with DreamTree Project at Pride in the Park. They invite anyone who is interested in the work they do to come over and ask about who they are, what their goal is, and how to become a successful ally. Also, look for their new Taos GSA t-shirts, which the group ordered this summer for GSA members and their sponsors! They would like to thank Guerilla Graphix, who helped their t-shirt design become a reality, and Yavanne Jaramillo, who helped them print a Taos High GSA banner this summer.

The mission of Taos High GSA is to provide a safe environment for LGBTQ+ youth, allies, and just anyone who needs a place to go where they are accepted and wanted. They have also spearheaded efforts to initiate new GSA clubs at other schools in Taos, including Vista Grande High School. They spread the word about groups like theirs in the hope that their efforts inspire people to lend a helping hand and be an ally.

In their own words,

Kineo-“I personally feel like there is still a stigma around the LGBTQ+ community, especially in high school. I was thrilled to find out that there was a club like GSA at Taos High School. I joined with a good group of people, and we had such good ideas. However, we were having some trouble getting them done, and I realized how little really gets done for LGBTQ+ awareness in small communities. That’s what inspired me to really work and try to plan events and lead GSA.”

Kavi-“My motivation to be a leader in this community for LGBTQ+ and their allies derives from my personal experiences interacting with issues faced by the community, and the experiences my friends and family members have had. Being new to the Taos area, I was so pleased to come across a group like Taos High GSA and really wanted to get involved. It’s so important that this community has events like pride and groups like Taos High GSA and DreamTree. I wanted to make sure that this movement has support and drive. I hope to spread the inclusive environment and awareness revolving around LGBTQ+, that we have worked so hard on in our club, to the whole community and hopefully beyond that.”

So again—as if you ever doubted it—we have a lot to be proud of in Taos.

Come out this weekend, and show your pride!