This weekend I got the chance to head up to the Riot Fest Denver, actually held just outside of Denver in Byers, CO. The festival was a two-day Rock ‘n’ Roll extravaganza that took place on a huge farm at the edge of nowhere. The lineup of bands was pretty sick, highlights included Iggy and the Stooges, Public Enemy and of course the triumphant return of The Replacements. 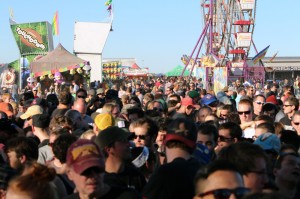 I’m a huge Replacements fan but I never thought I’d get to see them perform live. Before regrouping for Riot Fest Denver (and Riot Fest Chicago the weekend prior), The Replacements played their last show back in 1991 in Chicago. To be clear, only two original members of The Replacements were actually a part of this incarnation–Paul Westerberg and Tommy Stinson. This was also true of their last show back in 1991 as founding members Chris Mars (drums) and Bob Stinson (guitar) were “replaced” by Steve Foley and Slim Dunlap. The Riot Fest lineup featured Josh Freese on drums and Dave Minehan on guitar. Seeing a band like The Replacements live is something that gets built up so much in your head–to the point that you’re not sure you even want to see it happen. At the same time, I knew I would regret it if I missed out on the reunion, especially since it isn’t clear what else (if anything) the band has in store.

They sounded fucking great. Not like washed-up versions of themselves straining for admiration and attention. Like an authentic, if sometimes mellow Replacements. It was reluctant glory. Careless and messy but at the same time sharp and focused.

Overall the festival was very laid back. I was camping just outside the grounds with some friends, and they even let us BYOB. Nobody in the event staff seemed to fuck with any of the attendants during the festival. The other surprising thing was that pretty much everyone I encountered was a friendly non-douche. Kudos, Riot Fest.

Iggy and the Stooges

Iggy and the Stooges killed it. Those guys still shred like they’re in their 20’s. They do it with class and a fist full of brass. Another band I didn’t think I’d ever get to see live…

I feel like Public Enemy schooled a lot of the rockers at the fest. They had a huge crowd when they performed and definitely took the energy of the festival up a couple notches. DJ Lord also soloed a bad-ass Nirvana medley. You can’t do what he does by plugging an iPod in and hitting Play.

Chuck Ragan performed with a full band that consisted of a fiddle player, a bassist, a pedal steel player and a drummer. Songs that I’d only heard him perform solo on his acoustic transferred beautifully to a full band. They were incredibly tight and Chuck Ragan is a genuine guy with a commanding voice. An awesome set.

AFI sounded better than they ever have. You gotta give it to these guys, they do what they do really well. Their set was a wide range of “hits” from over the years, including one of my favorites, “Days of the Phoenix.”  I was blow away by their set.

Peelander-Z!!! For those of you who aren’t familiar, I won’t attempt to explain. However, I will tell you that they are awesome party aliens from planet Peelander.

Rancid played a solid set that consisted of a bunch of fan favorites. They came out swinging with the classic, “Radio,” and unfazed by the rain that started pouring right as they began, ripped through a set of slurry perfection. Note to self: Don’t try to get on their bus. They are meaner than they look.

Flag, not Black Flag, Flag. Unfortunately their set got cut short due to the impending doom of a little rain. But these old bastards really seemed happy to be shredding again–and shred they did! Keith Morris brought the angst and intensity that everyone was yearning for, while Chuck Dukowski balanced things out with an aura of “goofy uncle” that set everyone at ease. A quintessential moment in the lives on many festival goers.

Though I’m not up to date on all Guided by Voices‘ new material (who could keep up?), it was amazing to hear them. Microphone swinging, unabashed, stellar tunes.

Against Me! shreds. They still pack raw intensity into their shows and it’s awesome to hear them play live. They were a great way to get the blood pumping on Saturday afternoon.

So basically, all the bands that I cared about played really well and put on a good show. But honestly, the most important thing that I would be remiss not to mention here, was the Port-O-John-to-person ratio! Never a line!

So, aside from the $7 festival beers, I don’t really have any complaints. Way to go, Riot Fest Denver! 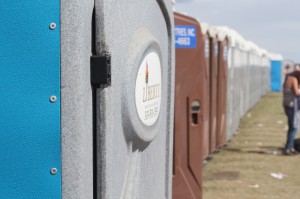