When discussing Matt Thomas, creator of The PASEO, I like to jokingly tell people that he wrote an opera during his lunch break. It’s ludicrous, sure, but sometimes it seems like it’s not that far from truth, given the frenetic pace he seems to keep up in his myriad creative endeavors, which include organizing and implementing Pecha Kucha — a multi-media presentation format that highlights various relative issues and spotlights members of our community — and curating exhibitions for the Harwood Museum of Art. Thomas is also a relevant artist in his own right, at times appearing to possess a Midas touch for whatever he comes into contact with. 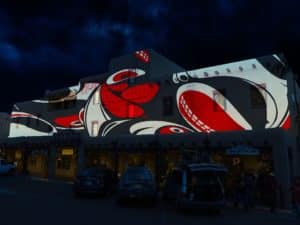 A night-time view of Hotel La Fonda with one of Motomichi Nakamura’s projects on the facade. Photo courtesy The PASEO.

Thomas’ gift for imagining the fantastic was put into prominent play one evening a few years ago, over dinner with future PASEO co-director Agnes Chavez, herself a new-media artist. Chavez is a passionate educator, which has served as an inspiration for her numerous endeavors, including directing the [email protected] Paseo education program for The PASEO, which combines different aspects of art, science and new media to create an entirely immersive experience and learning opportunity for Taos youth.

It was during that dinner that Thomas approached Chavez with the idea of The PASEO as a means of connecting that year’s Taos Fall Arts Festival, which for the first time would be held in three separate locations. It’s unlikely they or anyone else at the time could have guessed the impact this concept would have on either Fall Arts or the artistic identity of Taos. It’s been three years now since The PASEO transformed the Fall Arts Festival from a solid, if somewhat predictable, event into one of the most exciting and anticipated happenings of the year.  For the uninitiated, The PASEO offers an interactive art experience that requires multiple senses, in the already awe-inspiring setting of historic downtown Taos.

The juxtaposition of old and new is a large part of the vision for Thomas, an architect by trade. He speaks passionately about his need to utilize public space through art. Both he and Chavez share the idea of engaging entire communities regardless of age, culture or socio-economic status. In its inaugural year, I was struck by the number and diversity of people who attended. From toddlers dancing through light displays to elderly operating user-friendly kinetic sculptures, The PASEO seemingly offers something for everyone. That theme continues with this year’s one-night-only event, Party in the Plaza.

Japanese projection artist, Motomichi Nakamura, of Brooklyn, New York, will collaborate with electronic music producers Kanizzle and Dubvirus to create a four-hour sound and light experience. Nakamura’s animated monster characters and abstract landscapes will be projected onto the facade of the historic Hotel La Fonda. In conjunction with Nakamura and other artists, students from across Taos County have competed in the STEAM Monster Design Challenge, implemented by Chavez. 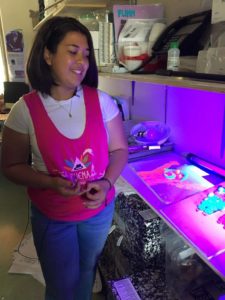 This type of community engagement is directly in line with the mission of The PASEO. Two other key aspects that may appear to be initially opposed are the desire that The PASEO remain a free event while still being able to pay participating artists, both concepts that are all too rare within the world of multi-media festivals. In order to achieve these goals, Chavez and Thomas, along with The PASEO team rely upon a host of volunteers, grants and individual donors, in addition to partnerships that include the Town of Taos, among others.

In addition to Nakamura’s work, and that of his student collaborators, fire artist Jamie Vaida, who in the past has created installations for Burning Man, will have two installations on the Plaza, “Fire Tree” and “Flaming Pipe Organ,” in collaboration with Alvin Sessions.

Native American artists Jay Smiley and Orlando Allyson of the Medicine Paint Live collective will do a live painting performance on to the Flaming Pipe Organ during the Farmers Market from 8 a.m. to 1p.m. on Saturday, Sept. 23.

Returning to this year’s PASEO is The Illuminator, a New York City-based art collective founded during the Occupy Wall Street movement. The group has staged hundreds of projection-interventions in public spaces. The group participated in last year’s festival and will be returning with an adaptation of their interactive projection that invites participants to voice their desires for our community and the world. 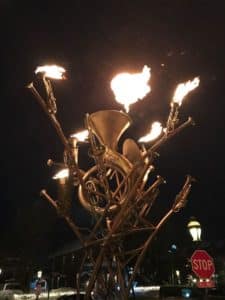 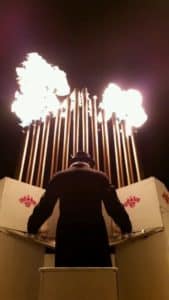 The Flaming Pipe Organ, left, and the Fire Tree, both by artist Jamie Vaida. Photo courtesy The PASEO

Twirl, a Play and Discovery Space, will host “Eye Play,” an immersive art installation and maker activity for family and youth that takes the viewer on a journey of optical illusions, while DJ Oliver is curating a Silent Disco in the plaza gazebo, merging three DJ booths and 10 DJs into 500 multi-channel headsets, allowing dancers to switch between electronica, Latin, Native fusion, Afro-pop and world music. Behind the DJ stations, shadow dancers from Ballet Taos will visualize the sounds with contemporary interpretations.

What: The PASEO Party on the Plaza

When: The party kicks off at 2 p.m. on Saturday, Sept. 23, with an artists’ discussion at the Harwood Museum of Art. Twirl’s immersive “Eye Play” opens to the public at 7 p.m., and the Party on the Plaza runs from 7 to 11 p.m. 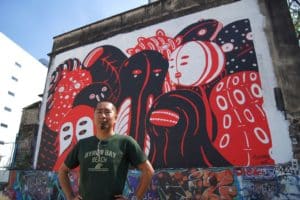