The Millicent Rogers Museum Miniatures Show runs from now until March 5th. Admission is free for Taos County residents. Stop by the museum Tuesday through Sunday 10 a.m. to 5 p.m. to see the show.

As it turns out, greatness can be held in small works of art. 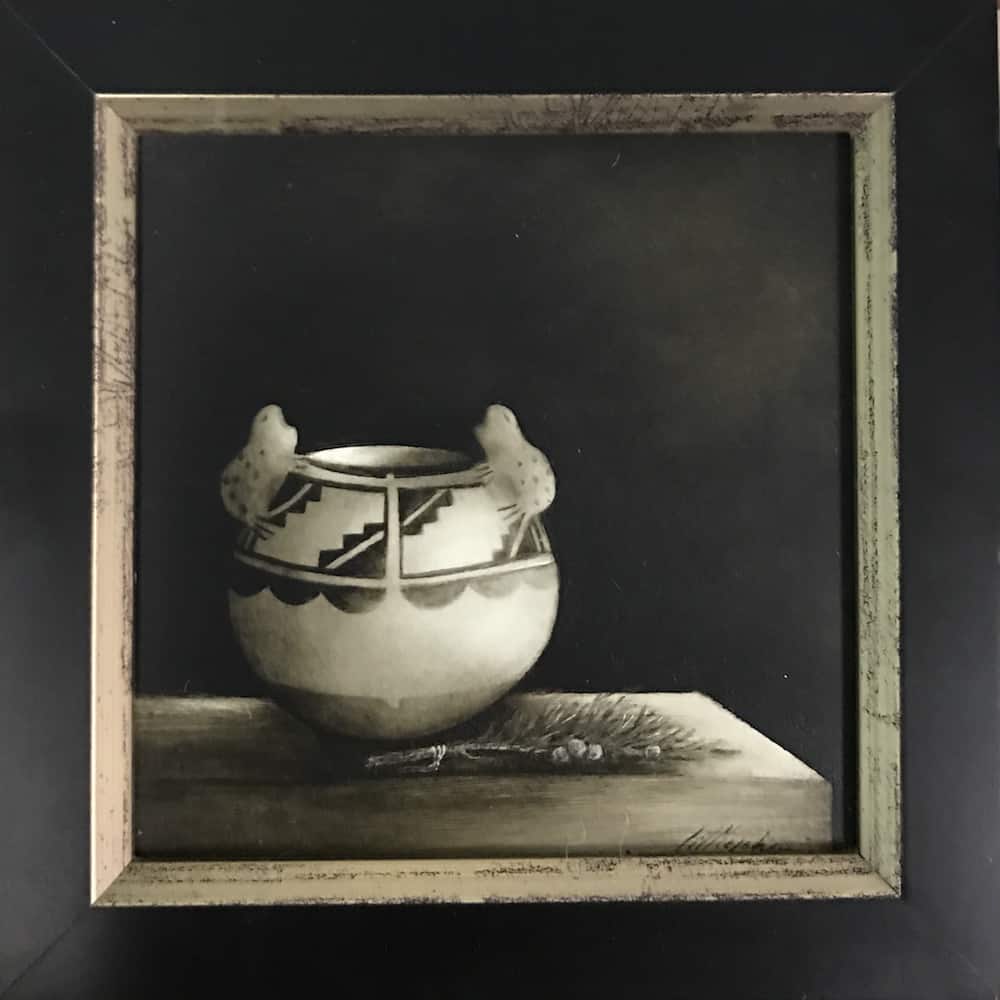 In the 15th annual Miniatures Show and Sale at the Millicent Rogers Museum here in Taos, works range in style and content from abstract to representational, in all media; each a unique testament to the condensation of a thought into a diminutive canvas, sculpture, or piece of jewelry. Each work is a different size and thickness from flat to bold, each reaching out at you from various degrees of depth.

What unites these works? Guidelines given to the artists were: 100 square inches, museum quality standards, original, less than a year old, and have not been shown in any other exhibit. Other than that, these works run the gamut. Take, for instance, a pop art black and white image of Frida Kahlo emblazoned with “Goddess” by Forge; “Open 8” by Christa Marquez, a trace monoprint made of handwashed paper, ink, and fire; and a small oil painting of St. Francis Church by Olga Teresa Gonzalez. Dreamtime Raven Tea Set by Patty Mara Gourley was voted Best of Show by the Board of Trustees. The People’s Choice awards went to Little Singing Pot by Melinda Littlejohn (2-D), Gathering Flowers by Spirit of the Dance (3-D), and Maiden of Life by Jacqueline Gala (jewelry). Pieces range in price from $45 to $2,000 each, with the majority in the $200-$400 range. Admission to the museum, however, is free for Taos County residents, so do yourself a favor and go see this.

Caroline Fernald, the Executive Director for the museum, had this to say about the show: “The response has been overwhelming. There is a wealth of talent in Taos County—artists from all backgrounds.” 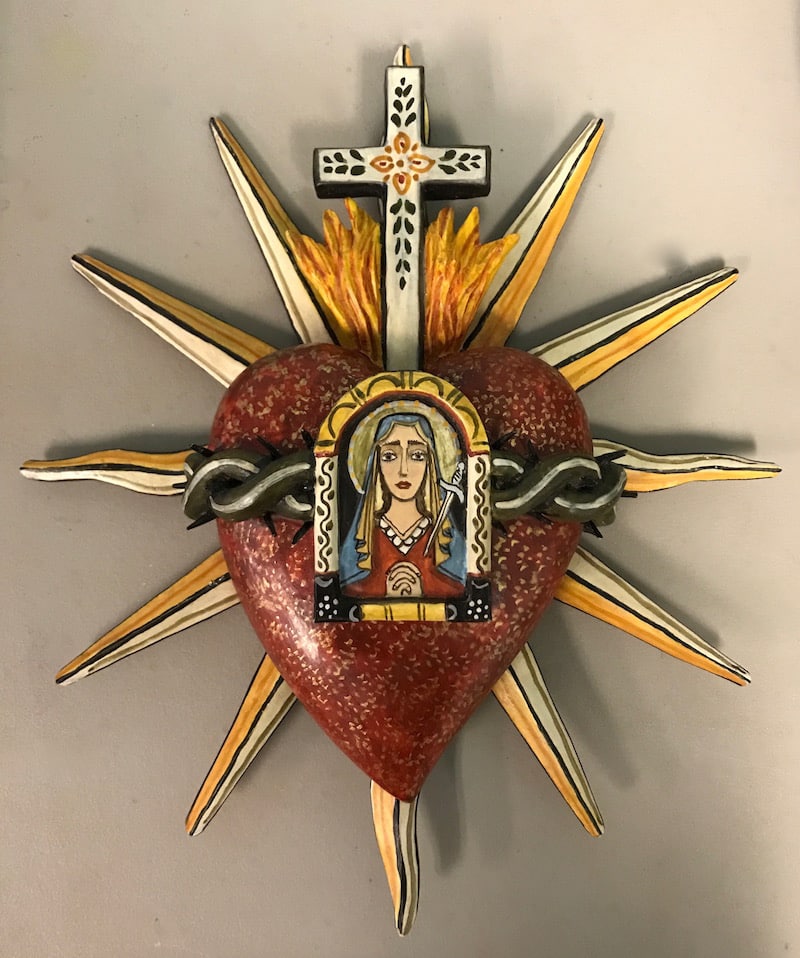 One of the tremendous things about such a diverse show is the opportunity to learn more about your own aesthetic. Which pieces appeal most to you, and why?

Me? I prefer 3-dimensional work, so give me thick paint (as in Winter Roses by Michelle Chrisman), glass rising off a canvas (as in Waterscape by Sandra Miller), any form of sculpture (as in the bizarre and marvelous hand felt sculpture Emily by Lise Poulson). Give me abstraction over representation, playful over serious, colorful over monochrome. But that’s the beautiful thing about a show like this; there is something here that appeals to everyone, and as many aesthetics as witnesses present.

Founded in 1956, the Millicent Rogers Museum features artwork from Native, Hispanic, and Anglo traditions, including weavings, pottery, paintings, and chests. Currently, early work from artists at the Santa Fe Indian School, who went on to establish themselves as well-known artists as adults, graces Gallery 1, and contemporary Katsinas (Kachinas) are featured in Gallery 14.

This is not at all what I expected when I first visited the Millicent Rogers Museum. To be honest, I expected a well-meaning but condescending approach to local art traditions, in a vein started by an Anglo woman from the East, with a similar approach to the Southwest. What I found could not have pleasantly surprised me more. Millicent was perceptive and sensitive. In a letter to her son, Paul, toward the end of her life, she wrote: “Life is absolutely beautiful if one will dissociate oneself from noise and talk and live it according to one’s inner light. Don’t fool yourself more than you can help. Do what you want—do what you want knowingly.” It takes a certain kind of person to write like that. Although Millicent’s modernist style is evident in her own jewelry designs, especially her Stars Running pins, she was also so clearly in love with art traditions and communities she found here that her affection is tangible in these hybrid designs.

The museum seems not only to honor Millicent Rogers’ legacy, but also to continue viewing and highlighting art in this region through a multi-cultural, respectful lens—like a sitting room where every art tradition of the Southwest is welcomed and revered.

This inclusive approach is also clear from their upcoming events and exhibits, including a weekend of featuring Taos Pueblo artists March 10th-12th, followed by an exhibit entitled La Familia, about the network of family connections that linked Millicent to this community, and these rich traditions to one another. The miniatures show, then, is one in a long line of exhibits featuring several different artists with varied artistic visions.

Proceeds from sales for the miniatures show are split 50/50 between the museum and the artist. All works in the show are also pictured on the Millicent Rogers Museum website. Interested patrons can also call (575-758-2462) or email Caroline Fernald at [email protected] to purchase a piece of interest.  While yellow tags can be pulled off artworks at the exhibit and brought to the front desk, one need not be present to purchase.  Pieces are on exhibit and on sale through Sunday, March 5th . So head out to the museum, and take in the greatness in small works of art.