The ropes are finally starting to come down up here. A few Thursdays ago, I was at tower 12 on chair 1 when the rope dropped on Al’s and other parts of the lower front steeps. I saw one patroller come down first then just a couple more skiers. It had me thinking I might get the red carpet treatment, but before I even had the chance to ponder how rare it is to hit Al’s when it’s flat with 15 inches of powder, a foaming, rabid hoard popped out of the trees at the top. The race was on.

Despite the crowd, there was plenty to go around. The conditions were, by far, the best we’ve seen since the end of January last year. On Friday, the TSV website was boasting 18 inches in 24 hours, which was double the predictions I heard. How often do results exceed expectations when it comes to snowfall in TSV? Earlier in the week they opened hiking to Hidalgo and Juarez. If everything goes as planned, which it rarely does up here, lifts 4 and 8 will be open by the time you read this.

As I reported earlier, the new Blake hotel will officially be open for business on February 1. That is, of course, if everything goes as planned, which they haven’t with the Blake. Be careful when you walk close to the hotel, snow can slide four stories to the sidewalk. They’re trying to fix that. Planning maybe? 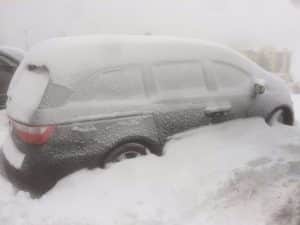 If we get another storm, like they’re saying we will, and you do come up, be prepared for the smash-up derby in the parking lot. Better yet, take the bus. It was a shizzle-show on Thursday and my car was one of many, many that had to be pulled out by a bulldozer. I can’t imagine the parking lot getting cleaned up for at least a couple of weeks. If you’re a personal injury lawyer, it’s a slip and fall jackpot.

Finally, important news from the cafeteria. I was excited to hear that the Reuben was back at TFK’s this year, but my excitement was almost immediately replaced by head-scratching disappointment when I heard it moved from the grill to the panini machine. A Reuben on a panini machine? Is that any way to treat the king of sandwiches? If you get a chance, do me a favor. Fill out one of the blue guest experience cards and tell TSV management to put the Reuben back where it belongs.

Live Taos’ Ross Burns will be on the scene all season long to give you the skivvy on all things tsv.