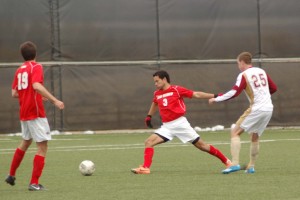 Taos Eco Park’s NCAA Men’s Spring Soccer Showcase kicked off last weekend, and as I sat in the stands before the Lobos of UNM took the field against the Pioneers of Denver University with a lightly-falling snow dancing in the distance around Pueblo Peak, I couldn’t help but feel excited about the prospect of seeing more NCAA Soccer here in Taos.

The Lobos came out with plenty of energy, communicating with one another on defense and moving cohesively up and down the field as a unit.  They came out looking to push the tempo and attacked from the outset with five shots taken in the first half, and two on goal, compared to the Pioneer’s one.

Their first goal came in the 49th minute after a yellow card was issued to Denver. On the restart near midfield, the Lobos’ Christopher Wehan sprinted down the left flank attacking the inline before finding James Rogers for a sliding goal in the box.

The second half found the Pioneers communicating better and attempting to match the Lobos attack, but to no avail, as UNM proved too much.

A Rene Reyes goal in the 66th minute on a Niko Hansen assist brought out a little chippiness from the Pioneers, but they couldn’t focus that energy into a consistent attack.

By the time Josh Goss scored the Lobos final goal in the 90th minute on an Oniel Fisher assist, it was pretty evident the Lobos initial energy would carry them through. 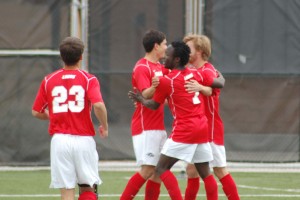 UNM coach Jeremy Fishbein is quoted as saying, “The guys brought a lot of energy and got some nice individual goals. Collectively, I thought our defense, pressure and communication were really strong.”

Fishbein undoubtedly will have mixed emotions this coming Saturday when he faces his old team, the Ft. Lewis Skyhawks in the last game of the Eco Park’s Spring Soccer Showcase at 1:00 pm.

Both teams are projected to finish well this season, and if the Lobos can come close to matching the intensity they brought against Denver, Ft. Lewis will have their hands full.  Whatever the outcome, the match undoubtedly will bring a variety of emotions from Fishbein who may be wondering if he’d made the right move by game’s end.