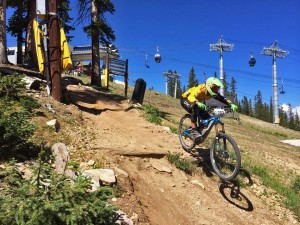 Macky Franklin doing what he does best

Macky Franklin moved from New Orleans to Taos with his family when he was thirteen, bringing a love of the bicycle with him, but no expertise whatsoever in navigating the steep inclines and drops Taos offered.

Prior to his arrival in New Mexico, his riding experience consisted of navigating flat, urban areas, dodging tourists in the French Quarter, and for kicks, bombing down man-made “Monkey Hill,” the steepest incline in New Orleans at 40ft.

His learning curve was steep, as the vertical drops Taos offered resulted in the Field Institute of Taos’ “Turtle” Award, given the rider learning to ride with clip-less pedals who spends the most time on their back, rather than on top of their bikes.

While growing accustomed to the challenges of off-road racing may have come at a turtle’s pace, Franklin showed incredible resilience and a desire to master the mountains of his new home. At fifteen he entered his first Junior Beginner race in Angel Fire, finishing second. Feeling confident with his second-place finish, Franklin brashly entered a 30-mile ‘Junior Expert’ event, but ran out of water 20 miles into it. It was then and there he learned the true nature of Mountain Bike racing, when a fellow rider took mercy on him and offered him some water from his own supply. 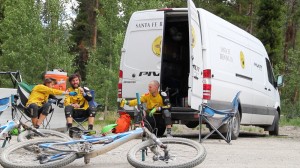 Keepin’ it real with his boys

That moment has become seminal in the development of Macky Franklin the Enduro Racer, who makes it a point to offer a friendly word of encouragement to fellow riders, or help them out in a tight spot. He’s still a fierce competitor, though,  who seeks to bridge his talents from the national to international stage in the coming years. 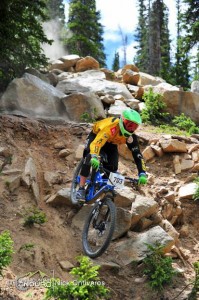 When this writer was coming of age in the early seventies of Southern California amidst the adventure travel boom in the home of outdoor magnate Patagonia, surf and mountain bike culture spawned early heroes, hometown boys that we knew from the neighborhood that suddenly found themselves recipients of sponsorship dollars and adulation beyond their wildest dreams, merely for doing what they loved.

The term “keep it real,” was coined in those days, and meant for one to remain true to themselves and the stoke they got from doing what they loved, eschewing big egos and getting caught up in the machinations of stardom, remembering their humble roots and not buying into the adulation.

It proved a tough dance, as success invariably changes even the most humble folks. However, I couldn’t help but have the term pop into my mind as I interviewed young Macky Franklin.

The Middlebury grad finished his baccalaureate with honors in Computer Science, and was poised to earn top-dollars in any one of a number companies, with Google recently calling with an offer. But Franklin turned it down, choosing to stick with eking out a living on the professional enduro circuit with the help of his sponsors Santa Fe Brewing Company, Pivot Cycles, Osprey packs, Osmo Nutrition, and Taos Mountain Energy Bar, among others.

His parents were taken aback when he told them of his post-grad plan to race enduro rather than rake in triple digits. “You’re doing what?!”, they incredulously asked, adding, “With the money you’d be making you could buy all the equipment you’re getting from sponsors!”

He had to explain it wasn’t about the money or any career path, but about the fact nothing equals the stoke he gets from racing down big hills on his bike. Nothing.

“I have yet to ask my folks for any money,” Franklin told me, “And to me, that’s huge. I’m able to live my dream and take care of my own business…I’m willing to sacrifice financial security for doing what I love. There’s hard parts to every job, but when I feel the pressure, I can hop on my bike and deal with it.”

The small clique of enduro racers provide him with a sense of family and camaraderie he knows doesn’t exist in the “real” world, saying, “There’s maybe thirty people that make a living out of doing this, so there’s a tremendous amount of support in the circle. Everybody knows that no one’s getting rich and that we’re all in the same boat.”

It’s not all good times and love, though, Franklin admits he’s a fierce competitor and his goal is to be one of the best. In the enduro race world three seconds can make a big difference between placing first and somewhere in the top ten. Correspondingly, he trains and races hard, knowing that his lifestyle and sponsorships are on the line.

After several years concentrating on the national scene, he’s set his sights on going international in the coming years, looking to broaden his horizons and potentially cash in on some of the bigger purses offered abroad.

Regardless of what happens, I’m sure he’ll still be the same guy who’s known to double fist an Osmo energy recovery drink and a Santa Fe Brewing Company Happy Camper IPA at the end of a race, while hangin’ with his bros, content he’s doing what he loves and keepin’ it real along the way.