LISTEN TO TONAL RANGER RADIO ON OCT. 30 AND NOV. 13  (TYPICALLY EVERY OTHER MONDAY BUT STUFF HAPPENS), FROM 11 A.M. TO 1 P.M., MST, ON KNCE 93.5 FM, TO HEAR SONGS FROM THE ALBUMS REVIEWED IN THIS SPACE, AND SO MUCH MORE INTERESTING NEW MUSIC (AND SOME OLD FAVORITES).

Editor’s Note: This edition of Tonal Ranger 2.0 catches up on albums released in the latter part of the summer, from July through September. A theme seems to be that while guitar rock is on the decline in most of the western world, it still reigns supreme in Philadelphia, PA, home of several great bands including SHEER MAG, The War on Drugs and Waxahatchee. Japanese Breakfast’s Michelle Zauner returned home to Oregon, but fronted Philadelphia-based band Little Big League for a few years. Now, onto the music: 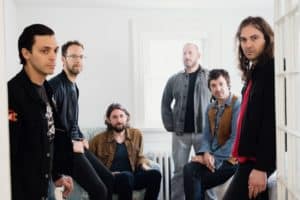 Coming at you with A Deeper Understanding, The War on Drugs. Photo by Shawn Brackbill

A Deeper Understanding
By The War on Drugs (Atlantic Records)

Adam Granduciel and company strike again with another beautiful slice of atmospheric ‘70s- and ‘80s-inspired rock ‘n’ roll. After two very solid albums (2008’s Wagonwheel Blues and 2011’s Slave Ambient) and one masterpiece (2014’s Lost in the Dream), one could forgive the band if there was a drop off in quality, but A Deeper Understanding is not that album.

Subtler in its charms than Lost in the Dream, A Deeper Understanding requires a little more effort, but Granduciel’s dedication to perfect recording and writing great songs is every bit as evident. There’s less baritone sax on this new album, which is probably the closest I get to having anything bad to say about this album.

The War on Drugs always makes you feel nostalgic, even though you can’t quite pinpoint the source of nostalgia. In fleeting moments, Granduciel can sound like ‘80s-era Steve Winwood playing with A Ghost Is Born-era Wilco, or End of the Innocence-era Don Henley playing with The E Street Band, or maybe Bob Dylan fronting Division Bell-era Pink Floyd, or how about this: Tom Petty with Arcade Fire. So, while the band gives you the feeling of a bygone era, they never sound like a retro act, nor do they ever seem fixed on any point other than the future.

Just take for instance, the associated genres listed on the band’s Wikipedia page: Heartland rock, synth-pop, Americana and neo-psychedelia. That seems to fall squarely in the “what the holy hell?” category.

Songs like “Holding On,” “Thinking of a Place,” “Strangest Thing,” “You Don’t Have To Go” and “Pain” are among the best songs of 2017, and it’s hard to imagine there being too many albums ranked higher on my year-end list when all is said and done. 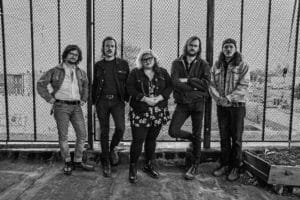 SHEER MAG relies on a heavy pastiche of classic rock riffs, soul and funk guitar fills, reverb and a punk rock, lo-fi ethos. Combined with some really solid songwriting and a powerhouse vocalist, Tina Halladay, and you wind up with rock ‘n’ roll that feels fresh and timely.

Any discussion of SHEER MAG must start with Halladay, whose fierce delivery resides somewhere between Janice Joplin and Alabama Shakes’ Brittany Howard (with nods to Joan Jett as well).

Like Joplin and Howard, Halladay has that special ability to seamlessly oscillate between warm soul and arena rock shriek, a talent that is perfectly matched with the rest of the band, which features Kyle Seely doing his best imitation of a modern-day rock guitar hero. Rhythm guitarist Matt Palmer is the band’s primary lyricist, walking a fine line between ‘70s and ‘80s power ballads (love songs that kick ass like “Need To Feel Your Love,” “Until You Find the One” and “Can’t Play It Cool”), and fierce, vaguely political anthems that seem to say, “if you’re not going to invite everyone to the party, you will regret it.”

Album opener, “Meet Me in the Streets” veils an anarchist punk message in a three power chords and the truth squall, more Thin Lizzy than Buzzcocks, while the album’s centerpiece, “Expect The Bayonet” is a beautiful, powerful and triumphant rebuke of social class systems that exploit the poor, and under-represented.

SHEER MAG takes two of the most traditionally misogynistic genres (arena rock, 70s metal) and turns them on their ear, taking back the legacy of rock ‘n’ roll that belongs to an aristocracy of white men who distorted African American blues riffs (with the notable exception of Jimi Hendrix, of course), and who later laced big-haired music videos with scantily clad ladies and overtly sexist lyrics.

To boot, Need to Feel Your Love is one helluva fun ride, and for all of these reasons it is one of year’s best albums to date.

(a list of other notable albums I’ve been too busy to let you know about):

Out in the Storm, by Waxahatchee (Merge Records) [B+] — Katie Crutchfield and company follow the script from her sister Allison Crutchfield’s album released earlier this year — Got a broken heart? Travel the world with the Crutchfield sisters! Flights leave Philadelphia daily.

Soft Sounds From Another Planet, by Japanese Breakfast (Dead Oceans) [B+] — As mentioned above, Michelle Zauner cut her teeth on the Philadelphia scene, but she’s found her wings back in Oregon. Fans of artists like Mitski, Thao and the Get Down Stay Down and Torres should be pleased to hear Japanese Breakfast.

Cost of Living, by Downtown Boys (Sub-Pop) [A-] — A mere five-hour drive up I-95 from Philadelphia, you’ll find Providence, Rhode Island, a city void of any big-time music scene, but big enough to be home  to one of the best rock bands in the country right now: Downtown Boys. Victoria Ruiz and the Boys bring a high level of social consciousness to their fierce and phenomenal brand of punk rock.

Plastic Cough, by Great Grandpa (Double Double Whammy) [A-] — Seattle’s Great Grandpa reminds us of the absolute best ’90s rock — Pavement, early Weezer, Dinosaur Jr. — and is one of the most surprisingly great albums of 2017. “All Things Must Behave” is the unofficial Tonal Ranger anthem these days.