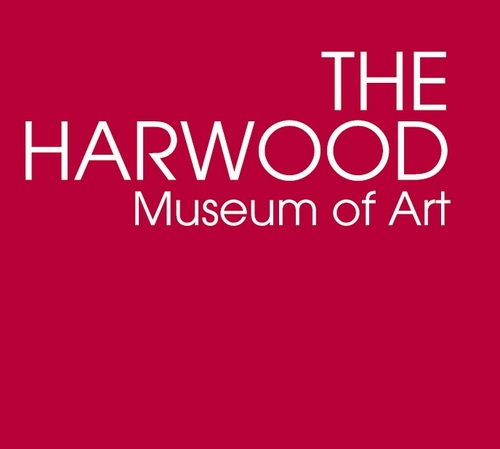 A Brief History of The Harwood Museum 1916-1922
In the early part of the 20th Century, many artists were drawn to the Taos area to pursue a new, truly American art devoid of industrial influence, inspired instead by New Mexico’s landscape and light and the traditional Native American and Hispanic cultures of the region.

The Harwood Museum collection brings to the public a unique record of this artistic convergence from its beginnings to the present day. The embracing spirit of the Harwood was established by artists Burt and Elizabeth Harwood. In 1916, the Harwoods left their residence in France to move to Taos. They immediately purchased the Ledoux Street property which contained several small adobe buildings. By 1918, significant development had taken place under Burt Harwood’s direction. He remodeled the buildings using many local traditional construction techniques. The Harwood complex, then called El Pueblito, was on the forefront of the Pueblo/Spanish Revival and restoration movement in New Mexico. Below, is an image of The Harwood in 1916.

The Early Harwood Foundation 1923-1935
From the beginning, the Harwoods’ home was the town’s only library. When the Harwoods discovered Taos had no library, they opened their extensive private collection of books to the public. By 1926, the Harwood Library was established and the community generously supported the growth of its collections. Mabel Dodge Luhan donated books from her private collection, contributed funds, and inspired other major support.

From 1924 on, much of the Harwood was given over to exhibitions. Even into the 1970s, clay pots, Native American artifacts, Hispanic textiles, Patrociño Barela’s wood sculptures, 19th Century retablos, and a cannonball said to have come from the 1847 bombardment of Taos Pueblo adorned the Library, offices and hallways.

In 1937, UNM and the Works Projects Administration (WPA), working in cooperation to create an enhanced facility, embarked on a major expansion and renovation project of the Harwood complex. Designed by John Gaw Meem, one of the best known architects of the Southwest, the Harwood addition became one of the tallest adobe structures in northern New Mexico, and included an auditorium, stage, exhibition space, and a library facility.

The Harwood 1945-Present
After World War II, Taos and the Harwood entered a new phase to embrace new trends in American Art. The Harwood strives to fulfill its educational mission by presenting special lectures, offering docent tours, and working with local schools and community groups with a variety of special programs. We continue to expand our vision as a cultural center that presents the art of our region while also serving as an important educational asset to northern New Mexico.