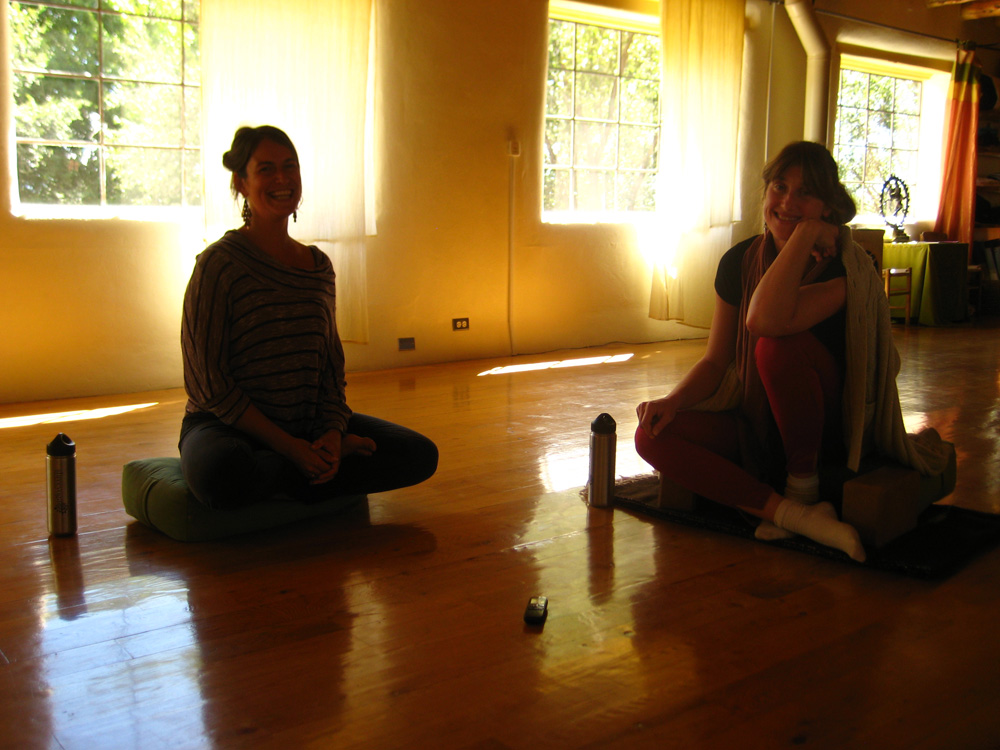 When I arrived at Shree Yoga last week to chat with Suki Dalury and Genevieve Oswald about teaching yoga, their upcoming multi-day retreat, and coffee and cigarettes, we grabbed pillows and went to sit in a small circle on the floor in the middle of the studio.

As I struggled to sit gracefully on my pillow, the two Shree owners seated themselves, completely comfortably and un-selfconsciously, in perfect symmetry —  each with their own choice of sitting accoutrements but cornered precisely, down to matching water bottles set at identical reaching distance. Over the course of the interview, it struck me again and again as a staggeringly-accurate visual rendering of both their personalities and their relationship with each other.

Shree Yoga is that charming, golden studio tucked into the little plaza at the top of Ledoux Street. The space has held many things over the years — its prior incarnation was as a stationary shop — but entering it now, its big wall of southfacing windows glowing with afternoon sunlight, it’s difficult to believe it was ever anything other than a yoga studio. Genevieve laughs that when she first called about renting the space — just 27 years old, the day her yoga teacher training ended — she wasn’t the only one in town who had seen its potential. “About seven other people had called him to ask if they could make it a yoga studio, so it was clearly a shared thought.” And from the moment of that phone call, Shree Yoga was open in under two months. “I’ve always been of the mindset that if you want it, you have to make it happen,” says Genevieve.

But let’s back up — and move across the Plaza to the World Cup, where it all began.

Genevieve, who has lived in Taos all her life, was in a car accident at the age of 15 that left her with a serious fusion in her back, and by all rights should have left her unable to walk ever again. “But I’m a willful person, and I had spent a lot of time in my body before that accident. I wasn’t going to let it stop me from experiencing my life,” she says. She pursued many different avenues of recovery, and along the way people kept telling her to try yoga. “And now, as a yoga teacher, of course I want people to do yoga. But I understand that we all arrive to it in our own time, to whatever the practice may be, be it yoga or something else.”

Genevieve’s path to yoga came in the form of Suki Dalury, who arrived in Taos nearly nine years ago while doing her yoga teacher training at Body in Santa Fe, and began working alongside Genevieve at the World Cup. “When Suki arrived she was bright, and happy, and doing a yoga teacher training, and she was fit, and awesome, and we got along,” remembers Genevieve. “She invited me to come to yoga when she started teaching, and I’d never been to a yoga class before, I’d never done down dog, and down dog is hard. I mean, it’s so hard. And then there was this sentence: ‘Alright, now extend from your heart. From that place where things really have value.’ And it was really beautiful! And I was hooked.”

The two found a shared passion in practicing together — “‘Let’s get up at 5:30 in the morning and go practice, before we go make coffee all day long!'” laughs Suki — and developed a lovely camaraderie around their personal practice. Soon they were thinking, wouldn’t it be great to have a place where we could do this all the time? Rather than the park, rather than our bedrooms? Genevieve completed her teacher training at Bhava Studio in Albuquerque, made that fateful phone call to the landlord, and here we are today. 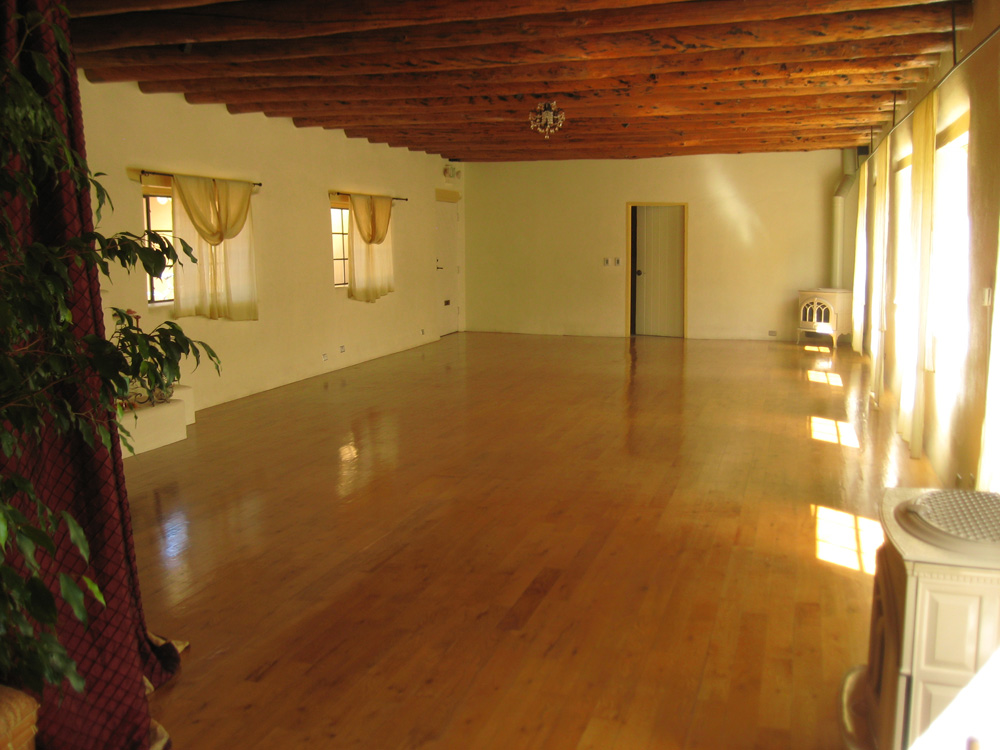 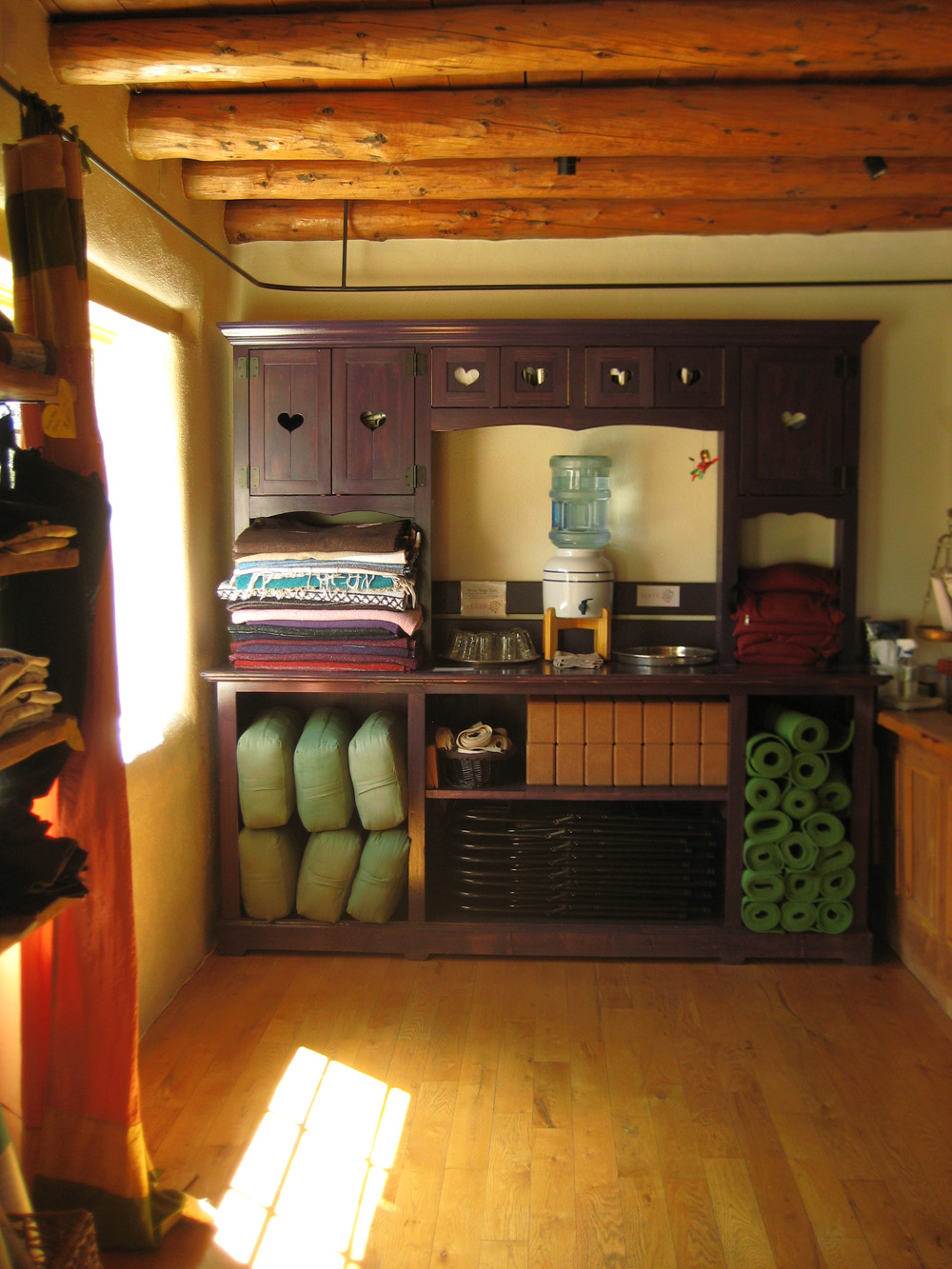 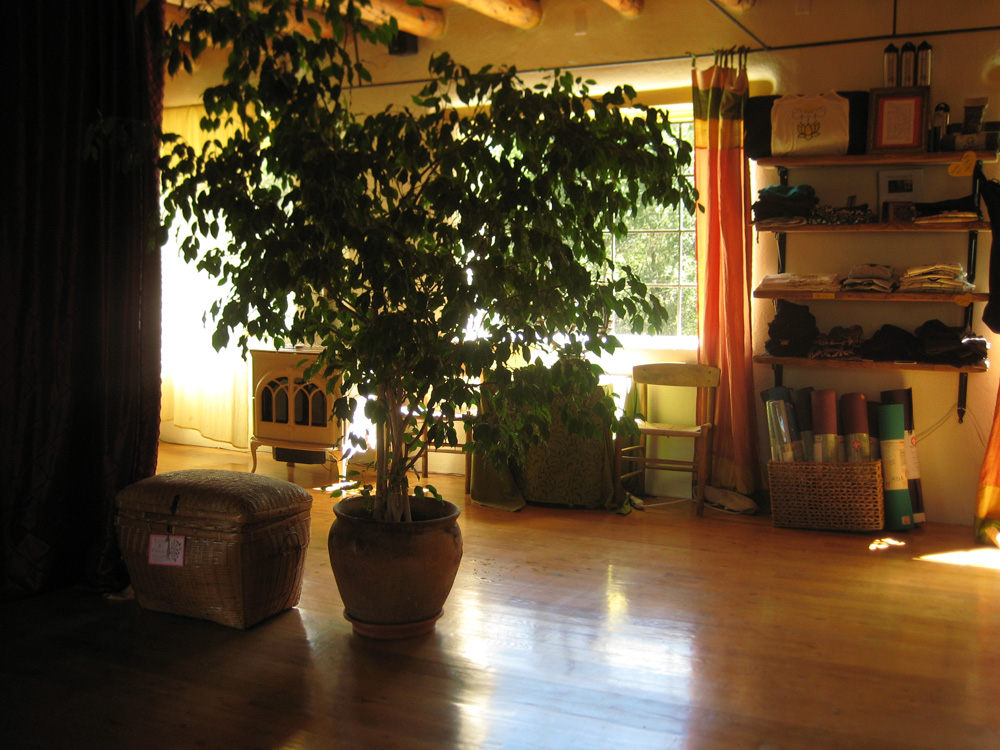 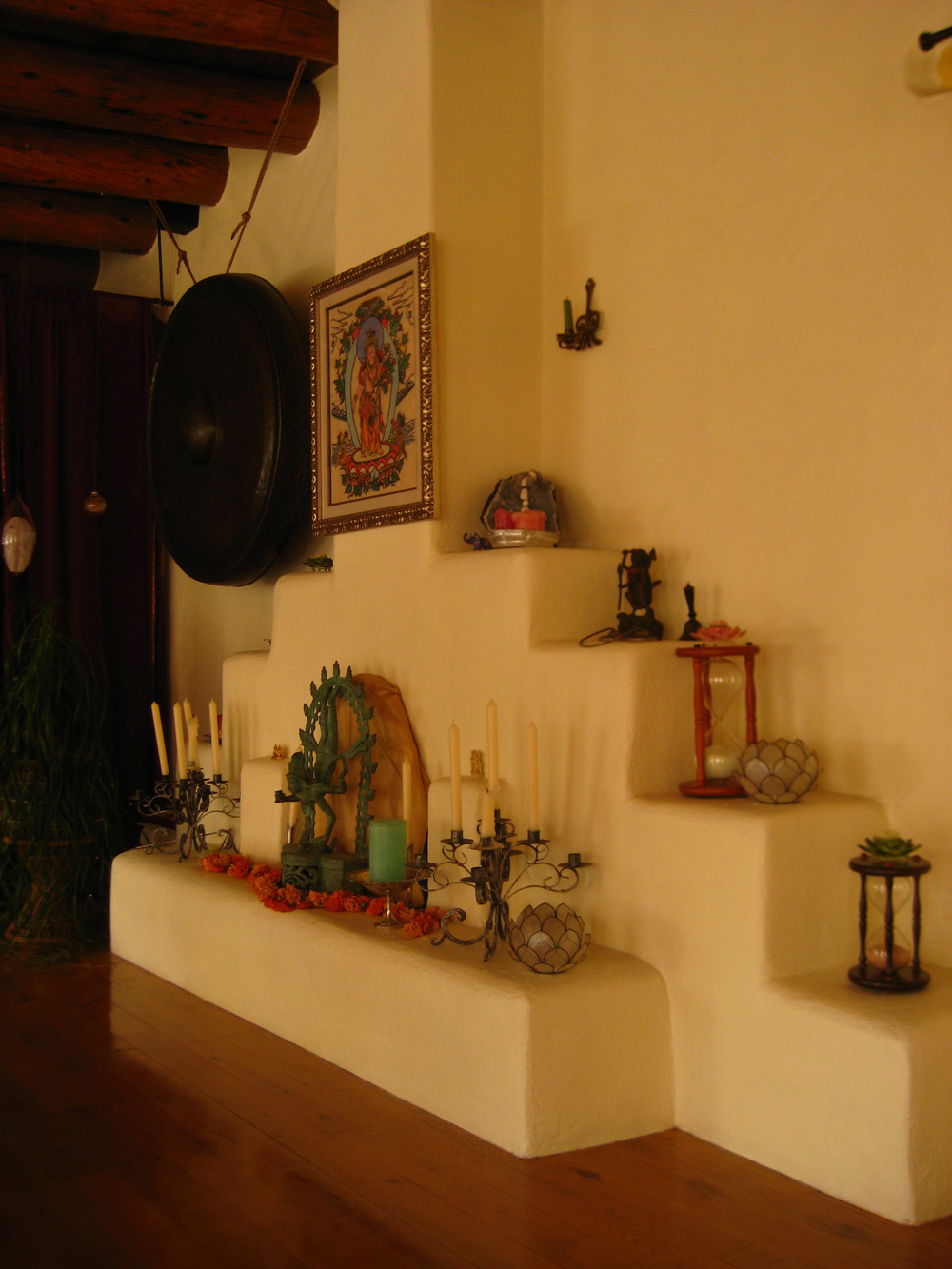 Not that it was all that simple. “A lot of things and people lined up for us to be able to open in such a whirlwind way. Neither of us had any clue what it meant to run a business – to teach 6 classes a week – to be running a schedule of 30 classes a week for other people – to be really stewards of a space,” says Suki. I asked them what sort of things they took from World Cup to Shree that informed their launching the business. After all, as central players at that hub of caffeinated Taosenos, their venture had a fairly high profile as new Taos businesses go — everyone knew them, everyone knew what they were up to, and hey, this is Taos, everyone has an opinion. How on earth did they pull it off so smoothly?

“Our capacity to not pretend to be anything other than ourselves, which included serving coffee from 6:45 to 11:45, and then running across the plaza to come and teach yoga, stinking of coffee, and be like ‘…Yoga! …Go!’ was very helpful for us as a team,” Suki recalls. “Transitioning between helped our presence in the community of  busting a paradigm about yoga, which is that it’s anything other than a practice for everyone. I feel like it was helpful for people who might think that yoga isn’t for them, to see us listening to music and drinking coffee and what have you — and then coming over here to sit and be quiet and focus on your breath. ‘Ok, that’s not so scary.'”

As for lessons learned from the World Cup: “That business is a really good business model, and it’s completely a local person’s business,” adds Genevieve. “Even though it’s right there in the middle of town and absolutely accessible to all of the tourists who come through town, it is local people that shop there every day and provide the main source of income for that business. And to keep local people in your business, you have to do two things: one, keep your prices reasonable enough that the people who make money here feel like they can afford to come; and the other element is that it’s a relationship. If you see those people every day, then you’re having a relationship with them. You can do whatever you want with that…,” they both laugh, “but the art of the service industry, for me, was learning how to be in relationship with everyone who came in there. Even if they were yelling at me – ‘how can I have a relationship with this person?’ And of course pursuing yoga just enriched and enhanced that.”

Five years down the line, Shree is almost certainly the highest-profile yoga studio in town. The Shree ladies are quick to add that there are many, many other wonderful places to practice in town — “There are other yoga teachers, other yoga studios, and they are great, and yoga is great in any way that you want to take it and any practice that enables you to have a better quality of life is great,” Genevieve enthused —  but they agree when I suggest that before Shree, there wasn’t really a single yoga “hot spot” in Taos.

A big part of that is because they’ve worked hard to keep prices as low as possible. They also introduced a new class unlike anything previously available in Taos — a $6 Yoga Hour, every day at noon (except Sunday).”We’ve had a lot of conversations about this – about signing up to yoga being something that you have to shell out a bunch of money for. Classes are now $30, $40 in some cities around this country, and I just think that’s gross,” said Suki. “We really wanted to meet this community in a way that felt fair, and also honor our teachers’ time, the students’ time, and all of the other teachers in town’s time. So the short classes were that. They started as noon classes, and nobody was coming, because it was a totally bizarre time – and now those classes are totally full, consistently full.”

With the success of Shree and a full teaching schedule, the two have now turned ahead towards what’s next — which comes next month in the form of their first multi-day retreat. It will take place November 14 – 17 at the Mabel Dodge Luhan House here in Taos, and the look in their eyes when they talk about it is enough to make anyone want to sign up right away.

“The next logical step for us because we can’t teach more regular classes, was to do something like this,” says Suki, with barely-contained excitement. “The big idea is to send people home with an understanding that their practice is something they can sustainably take into their own lives, in their own time. And so we wanted to talk about these fundamentals of the practice, whether they’re understood on a philosophical level or as social conduct rules,” pause for laughter, “– rules is a bummer of a word – ideas of how to be nicer to yourself and with other people, out in the world –”

“Principles of manners and values, maybe,” Genevieve jumps in. “What are the parameters that you live within.”

“Because we’re not teaching a yoga that teaches you to go live in a cave for 100 years and figure it out,” Suki takes back over (truly, watching them speak together is like witnessing two parts of the same organism). “We’re living in the world, and guess that most of the people that come to classes here are doing the same. That they’re not crawling out of meditation to come and do some asana with us,” more laughter. “So how to take this practice into the future, in this very interesting time where the conversation around our work is becoming, suddenly, really rich, because so many people are intrigued, and interested, for whatever reason. We really wanted to talk about how to share that.”

You can register for the workshop now, here, today! 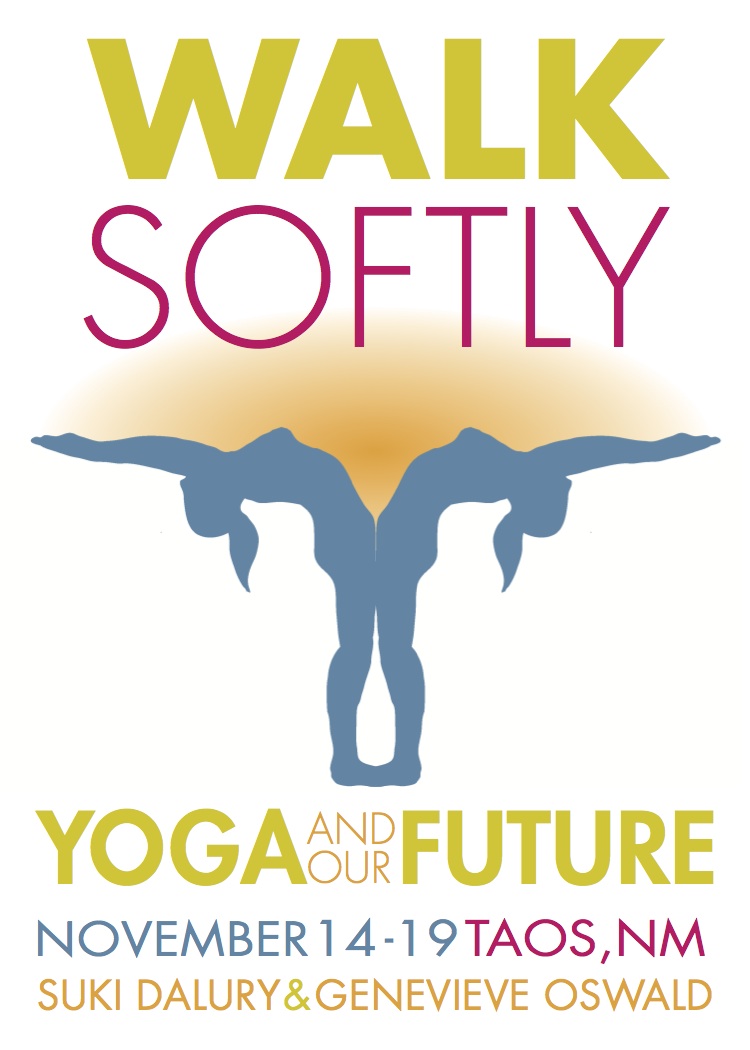 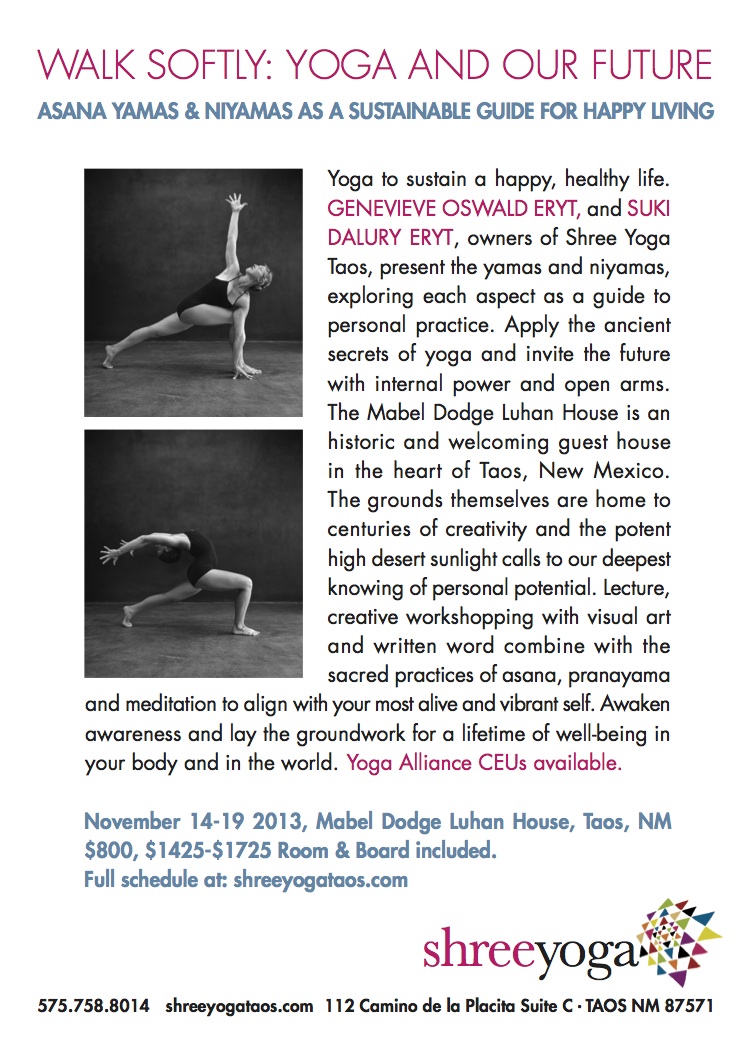 We talked for a full hour, and there’s so much more to be said about these two women and their truly inspirational perspectives on yoga, life, and business — but this is the internet, so we’ll leave off here for now. However, if you’re in the mood for more, I’ll soon post the text of the full interview, too — it gets really good when Genevieve gives us a crash course in the history of yoga, and Suki explains one of her favorite teachings, asteya.

As an aside, they’ve also recently launched a project with local photographer Zoe Zimmerman, called Sundara Studios. Here’s a teaser of their gorgeous 2014 calendar, soon to be available for sale at Shree: