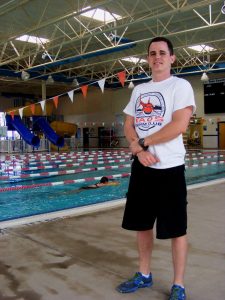 Alfredo Aleman was a nineteen year old swimming phenomenon, the youngest member of the Cuban National team, and an accomplished tri-athlete who had spent the majority of his young life in water.

His step-father — a rescue diver and lover of the sea — infused young Alfredo with a reverence for the ocean, and accordingly, water would become the most important element in his life.

Traveling with the Cuban National team invariably brought the plight many Cuban athletes face; to defect or not.

As with so many before him, the lure of America and its ex-patriot Cuban community proved too great a temptation, and with senior members of his team advising him, Alfredo made his move at a competition in Florida.

“The older guys told me, “Look…you’re nineteen, you’ve got your whole life ahead of you. Now is your time. You may never get this chance again.”

So Aleman took the plunge, living first in Clearwater, Florida while commencing the long process of distinguishing himself in his field.

“When I came to America, I would have never thought to coach. I wanted to compete. That was the goal, to be the best…you know…like all athletes. The accident changed everything,” Aleman explains in his soft-spoken manner.

Rather than become distraught and wallow in self-pity, Aleman turned to what he knew best: swimming.

“Swimming was all I’d ever known,” he matter-of- factly says to me, displaying his infectious smile. “I looked back on my own life and realized a good coach can make a huge difference in a kid’s life.”

His vision is to recruit the youth of Taos into the swim culture he grew up in, replicating what he learned as a youth in Havana. “I’m here to not only coach the kids, but to give them support and love if they need it,” he tells me. In his capacity as director of Taos Swim Club, Aleman sees a huge up-side for swimming in Taos. In particular he relishes the 4-and-up ‘learn to swim’ program.

“As a kid, I was taught by great coaches, who now serve as a model for me. Now it’s time for me to give back what I had,” he tells me, with a broad-smile and a look of determination in his dark-brown eyes.

I ask him what he likes most about Taos and he immediately replies, “The people are so friendly. Everyone has been so friendly. Havana’s a big city and isn’t as intimate as Taos, I really like it.”

For more information, visit the Taos Swim Club at their website here.