Café Scientifique New Mexico is a free, fun way for teens to explore the latest ideas in science and technology. Teens get to share stimulating conversations with scientists, engineers, and inventors in an informal and relaxed setting that truly take the science out of the classroom and into the real world.

The program is run by teens for teens in Taos, Española/Pojoaque, Los Alamos, Santa Fe, and Albuquerque. In Taos, more than 30 teens from Taos High, Taos Academy and Vista Grande are organizing and participating.  The first café was on the science of explosives. The upcoming one on November 26th, called  ”Tectonic Mysteries — A billion year “who done it”” is presented by Terry Wallace, from Los Alamos National Laboratory. These conversations are advanced and in-depth. They share food, conversations and participate in demonstrations.

These Taos teens are part of an international movement. Café Scientifique (or Science Café) is an international movement of scientists and interested citizens who organize informal monthly discussion groups. The goal is to provide a place for public discussion of interesting and controversial issues in contemporary science. The Café Scientifique idea started in England a few years ago, based on the French Café Philosophique. In the Café Scientifique, people come together in a friendly pub after work and hear an introduction to an interesting current scientific topic, led by an expert. They have a few drinks and conversation on the science topic. There’s no PowerPoint and there’s lively discussion. It’s not a seminar, but intelligent and intellectual conversation in a familiar and comfortable place.

The movement has grown, becoming somewhat of a grassroots public science initiative.  Cafes operate in 42 towns across the United Kingdom and about that many in the United States as well. In the United States, Michelle Hall at the Los Alamos Lab’s Department of Science Education Solutions decided to initiate the cafés for teens.  She started them eight years ago nationally, and now Meghan McFail has the distinct pleasure of organizing the cafes in Taos.  McFail loves working with the high school students and turns most of the organizing over to them. She comments that “Students get to experience how science in the classroom translates to the real world and are given the extremely rare opportunity meet and share ideas with the world’s cutting-edge leaders in science today.”

The group’s media guru is Leonor Morrow, a junior at Taos High School. She is in Ms. Carla Chavez’s biology class. Though not particularly keen on science, she got involved because she was interested in seeing how science works outside the classroom. Ms. Morrow produces video of the lectures and interviews students on their experiences with the café. Another student, Alayna Barela, also helps out by recording footage of the cafés.

The general consensus of the students interviewed is that the lectures offer pertinent information that can be used both in and outside the classroom. Moreover, several teachers offer their students extra credit if they attend the cafés. These presentations also allow teens an opportunity to engage in lively conversation and participate in hands on activities. As one student remarked, “It gives me something to do after school.”

Cafe Scientifique is a fabulous opportunity for the people of Taos to immerse themselves in knowledge. Held every month at the First Presbyterian Church, it is an event you won’t want to miss. For more information on how to get involved, visit the CafeNM. The upcoming cafes include: 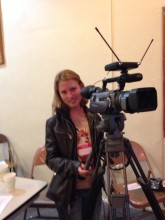 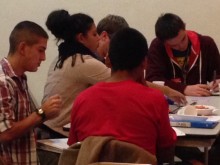 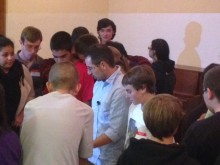 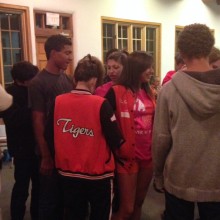