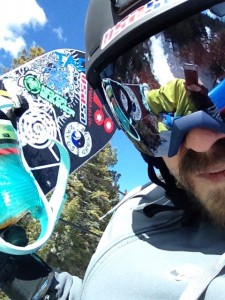 Chris Oschwald started snowboarding when he was seven years old in Santa Fe. Since then he has become a pro am boarder with the USASA, a non-profit dedicated to facilitating “fun and fair events for all ages across the country, to attract snowboarders and freeskiers, promote their development, provide member education, and influence the future of our sports.”

I spent the day with him last Friday at Taos Ski Valley talking about competition, sponsorship, and boarding the Enchanted Circle as he often does on the weekends. Of course this was his first lift ride to Kachina Peak, on the lift that opened this season, and we had a blast. Chris boards all over the state, Sipapu, Angel Fire, Red River, Pajarito, Sandia. The interview contains footage from Kachina Peak and GO PRO footage of boarding all over the Enchanted Circle.
Snowboarder Chris Oschwald

Sponsored as a teenager by a now-closed company, Chris hopes that his own Butter Industries can cultivate local talent and build more support for local snow sports. Chris has been boarding almost as long as there has been an organization like USASA. The Red River Ski Area and Beyond Waves in Santa Fe sponsor him locally. Chris only started to compete a few years ago, so his 2013 first-place finish at the USASA National Slopestyle competition may not yet be his highest achievement in the field. He also has a young son and considers riding with him to be just as rewarding as winning a national competition.

Chris will be competing again, in less than two weeks, at Nationals at Copper Canyon, Colorado. In a recent interview with ABQ Live, he stated his goal is to try out for the 2018 Olympics. At age 34 he is probably considered crazy to even consider the notion. But as you will see in this video interview, snowboarders who ride like he does have to be crazy.

All joking aside, Chris is an inspiration for anyone, not just fans of snow sports. A New Mexican through and through, he is cultivating local support and bringing together people from around the state to galvanize everything from tourism, to state pride, to health, to inspiring the young.