Jessica Maffia is a New York visual artist who found her way to Taos, like so many others, as an artist in residence at the Wurlitzer foundation. In the backlash and shock of the results of the 2016 United States election she found herself asking a question: “What do we do now?”
In her own quest for an answer, Jessica found hope and encouragement in asking others the same thing. She decided to light the way, literally, by taking these answers, writing them on lanterns and hanging them in the Taos Plaza Gazebo over Thanksgiving weekend. 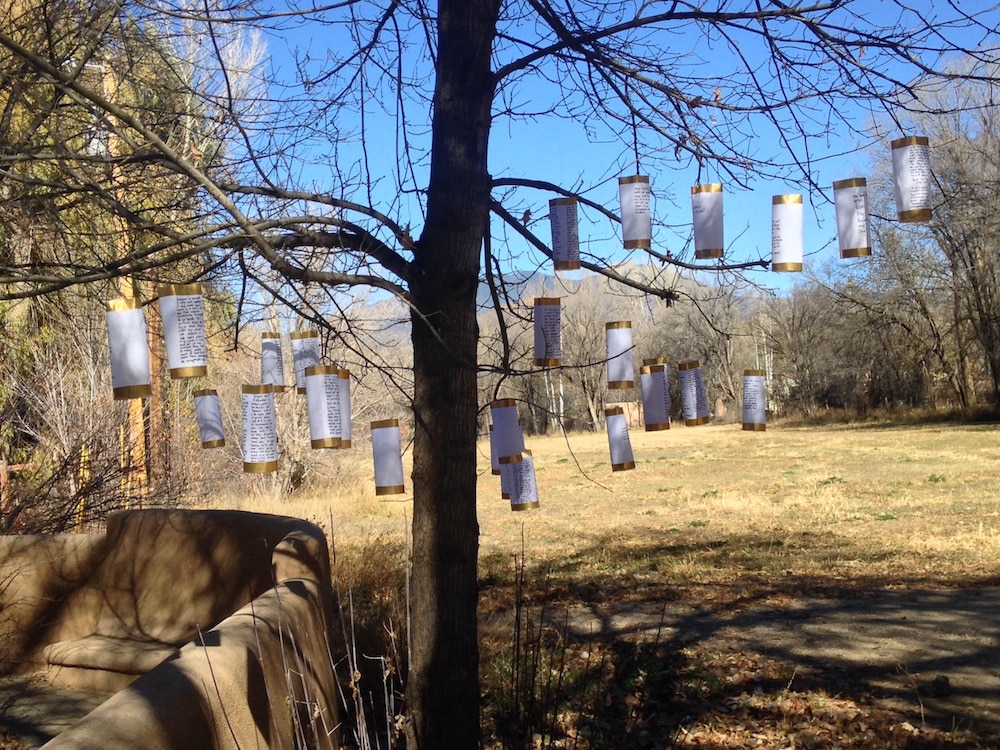 Jessica’s installation is inspired by a line from a German poem, Lantern, lantern stay alive, it’s dark outside but my light keeps shining. When I asked her to tell me more about the project she said, “The day after the election I, like so many others, could not stop crying.” Jessica despairs over the explicit division of values our country is expressing. She says for her, “It was a day of mourning. My instinct was to reach out to everyone I know and commiserate. The solidarity was nourishing.”
Jessica first came to Taos in 2010 to visit her uncle who lived in Tres Piedras. She was struck by the beauty of the landscape, no surprise there, and has always known she wanted to return. She applied to be a Wurlitzer Fellow on the suggestion of one of her friends. Speaking about her current residency she says, “This has been one of the most magical and inspiring experiences of my life. I have been here since September 14th and am slated to leave December 7th but we’ll see about that….”
Jessica’s work spans a wide palette of mediums. She’s dabbled in photography, collage and assemblage, but she’s worked primarily for the past four years in pencil and colored pencil on paper. Her time this autumn at the Foundation has been spent branching out and working with gouache (opaque watercolor). Whatever the medium Jessica says on her website, “Her art seeks the poetry in the mundane. She is excited by ‘the everyday’ and honors the overlooked.” 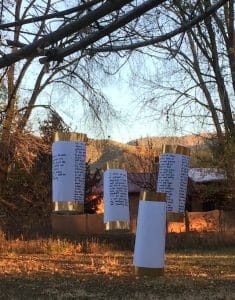 The Lantern project will be installed on the Taos Plaza Gazebo and ready for viewing by Wednesday, November 23rd and will hang at least until Sunday, November 27th. Jessica is using battery operated LED tealights to illuminate her lanterns that last at least four days. However, members of Town Hall have offered to provide another round of lights leaving the project open ended with the potential to glow long into the future. There will also be blank lanterns and markers on hand for viewers of the project to write their own responses and add to the light.
When I asked Jessica what her favorite answer to the question, “What do we do now?” has been thus far, she told me she wasn’t ready to answer yet as the responses were still pouring in!

Jessica Maffia’s “lantern, Lantern stay alive” installation will be on display at the taos plaza gazebo this weekend Wednesday November 23rd through Sunday November 27th. Go soak up some hope or share your response with her at [email protected]

All photos courtesy of Jessica Maffia.