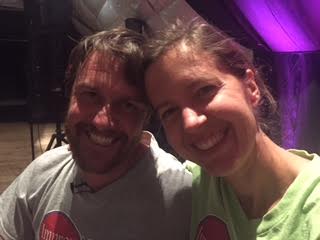 Jason and Hollie at the Solar Center

On October 20th, I dropped in at KTAO to check out the Improv Medicine Show–an interactive performance project created by Jason Pfeiffer and Hollie Laudal to facilitate organizations at conferences to meet their objectives. This night they were there taking the helm as keynote speakers for a TEN (Taos Entrepreneurial Network) Meeting. They use skits and exercises to pull participants out of their comfort zone and into the moment to practice for real situations, whether that’s a conversation with a doctor or pitching a business idea.

This was Improv Medicine’s third show, having first appeared at Integrative Medicine de Taos’ SIMPLE Conference in July, and then at the Friends of DH Lawrence Ranch annual event performance in San Cristobal in September. I spoke with them for a few minutes about the inspiration behind their project. Here’s a little of what they had to say:

For Jason, it started by drawing on several of his interests in conjunction with a synergy around the medical profession between himself, Hollie Laudal, Christine Sherwood, and Irene Loy. He said, “The reason for me was, being a cancer survivor and working around medicine, I found that it’s important to be present and really authentic with yourself and those you are working with, whether it’s doctor/patient or colleague to colleague.”

He explains how with improv the call is to vulnerability. In an improv setting the veil is lifted, and things can be said and witnessed that are often left unsaid because of our inhibitions. He says regarding the authenticity, “I found it’s powerful when you go there, when you talk about your real experiences with people. It opens you up, and then it opens them up, and that’s where real relationships and connection happen.” Practicing improv is a way to exercise the muscle of being present, “and just showing up in the way you need to for what the situation calls for.” Because of that, “it goes way beyond medicine. It works for everything.” 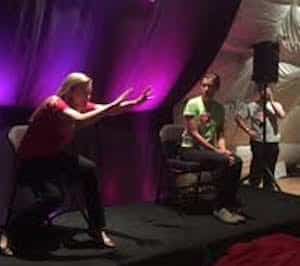 Hollie and Irene onstage at the Solar Center

Irene Loy was also on stage Thursday night. She first started working with ImprovBoston in 2008 and has been doing Improv ever since. She met Jason and Hollie at Hollie’s improv classes and shortly after that they invited her into the troupe. She says, “This work is healing, because we as adults live so much of or lives in the past or future, and taking everything we do so seriously. This work helps us break those habits by practicing the exact opposite skills.”

Hollie Laudal says that Jason is one of her favorite people to improvise with. She says he’s great at making it fun and playful and without judgement so that nothing that comes up is ever wrong. She’s been doing improv for ten years. As a Hospice Chaplain Hollie improvised with her team to uplift them from the energy drain of being care providers. Then she had her own health concerns to reckon with, and she started to envision something very similar to what Jason approached her with. For the medical conference in July, they used several skits and situations she had developed when she worked as Hospice Chaplain. Hollie says, “Improv is like my religion…Two hours go by and I don’t even notice that conventional time has gone by. I’d like to be more like that in my daily life…There’s this sense of timelessness that comes from complete freedom to be whoever you want to be…and that freedom can translate into how we live every moment.”

And alas, with all that powerful intent behind what they do, these guys are really funny, too. Check them out on Facebook for upcoming shows and workshops. Or catch a class with Hollie on Wednesday nights at Metta Theatre.