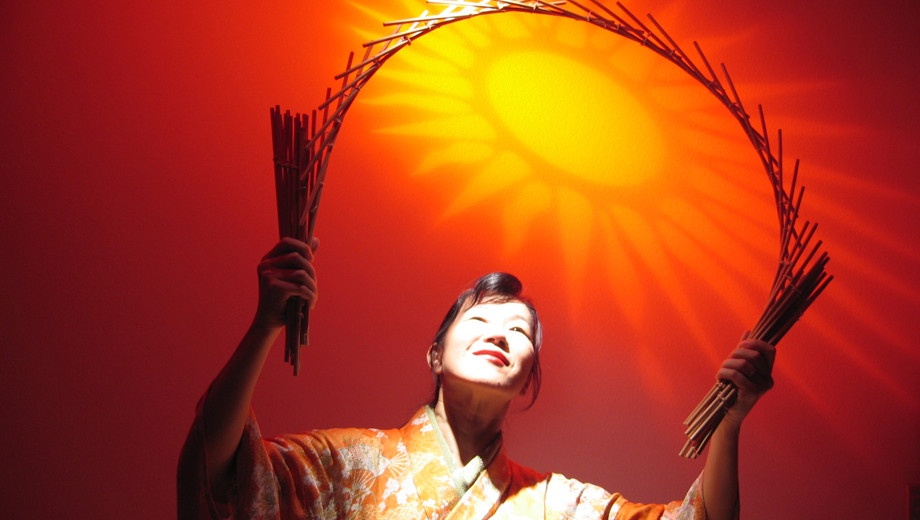 Is the art of listening in threat of extinction?

Well, How much does a snowflake weigh? Someone in the audience shouted out: One ounce! I was thinking to myself, Nothing. Sarah Malone, who took the stage at the Taos Community Auditorium on Saturday night, October 24, was retelling a German story, and the answer, she said, is nothing more than nothing. But, when millions of snowflakes land on a tree branch, it can break.

Or, she said, maybe we are just one voice short of having peace in the world.

I first went to a storytelling festival over twenty years ago, in Tennessee. It was late September, and the vibrancy of the approaching Southern Autumn felt a lot more like Spring. It was held outdoors under huge tents, and until that day I didn’t know that storytelling was actually a thing — the kind of thing, that is, you’d organize a festival for. My grandmother, now she could tell the story of our family back four hundred years to the time they immigrated from Leipzig in Eastern Germany to Switzerland. She did it when I was a girl while we made pies or hung laundry. Once, when she was showing me how to knead dough, she said: This is how we deal with our men when we’re angry at them, and she threw a punch right into the center of that pasty heap. I never did see my grandmother angry, but we had pie every day at 4pm and although I prefered pfirsich, my grandfather’s favorite was her zwetschke.

In Tennessee, it was an American storytelling festival, with tellers from the Pacific Northwest, the Farm Belt, California, New Orleans, the Northeast. There were accents and colloquialisms, some had banjos or fiddles, all expressed a musicality of culture and place that heard like an unbroken chord deep into the past. And diverse: it was clear that our country is one of regions and that at these festivals, people come together to share their different voices and in doing so, connect.

SOMOS has been bringing us The Taos Storytelling Festival for sixteen years. The first one was held underneath a tent in Kit Carson Park. This past weekend there were origami and storytelling workshops at Taos Public Library, storytelling events at Taos Community Auditorium, and a Story Slam at Taos Mesa Brewing.

And what, then, is a Story Slam? As James Nave explains, imagine you’re at a baseball game and each batter gets up to bat, the one who hits it right in the perfect spot when the bases are loaded hits a grand slam. At a Slam, judges vote on each storyteller’s moment at bat, and the winner is the one who hits it out of the park.

So how did it all look like this year? Something like this: Brooklyn. Italy. Japan. The Grand Canyon. Havasupai. New Mexico. The order of Masons. Dragons. Two left shoes, sized 9 and 10. The age of the Earth charted with origami. A love affair between a rock and a lizard. A naked man being burned by the sun. A fish that drowned in Central Park. Growing up in New Mexico you gotta be Catholic. You just have to be. Children’s stories. Story Slam. And hands, lots of hands —

John Biscello’s hands made no sound at all. Cisco Guevara’s hands held the theatre lights. Kuniko Yamamoto and everyone sitting in the audience at the TCA on Saturday all together made the sound of rain falling, with their hands. Oh, and the clicking of tongues. Sarah Hanlon came to Taos Mesa Brewing on Friday night and was impromptu solicited from the audience because they needed a few more slammers. The rain pounded on the tin roof and it felt warm and cozy. TMB was full, a gathering of souls sharing tales. And when Sarah told us how her hand had unexpectedly delivered un scafo to her Napolese boyfriend forty years ago and it went scafare! to his face, her story subsequently went Slam! Right outta the park. She won the night.

And everyone was listening.

What else is SOMOS up to this Fall? Check it out:

Friday, October 30, 5-7pm at KTAOS Solar Center:
An Evening with Taos’ own Mirabai Starr for the international launch of her new book. Mirabai will be reading from and signing Caravan of No Despair, her memoir of loss, rebirth, and transformation. Special guests include Natalie Goldberg, who will be introducing Mirabai, and singer-songwriter Jenny Bird. www.mirabaistarr.com

Friday, October 30-Monday, November 2 in Truchas, New Mexico:
Tupelo Press Writing Conference: The Perfect Ten Writer’s Retreat
“Conceived and presented by three of the most experienced poets and editors in the nation, this is a no-nonsense, intensive workshop that will result in ten perfect poems…” Join Jeffrey Levine, poet, Editor-in-Chief, and founder of Tupelo Press, and Veronica Golos, award-winning curator, teacher and poet. www.tupelopress.wordpress.com, or call: 413.664.9611

Friday, November 6 at 7pm at SOMOS Salon:
Reading by Gladys Swan, Author of “A Dark Gamble” and “Ghost Dance: A Play of Voices”

Saturday,  November 14 at 2-5pm at SOMOS Salon:
Bring Your Words to Life: The Art of Reading Aloud. A Workshop for Poets, Writers and Performers with David Perez

Jennifer Ammann writes whenever she can. She teaches Yoga, loves to dance, and lives with her three boys becoming men who also happen to be budding writers, actors, musicians, and dancers.