I don’t know about you, but there are a few staples to my holiday season every year: breaking at least one delicate and sentimental tree ornament, agonizing over how to best pack wine in a suitcase, and watching It’s a Wonderful Life.

Frank Capra’s classic 1946 film, starring Jimmy Stewart and Donna Reed and Lionel Barrymore and a bunch of other great actors most of us don’t remember, stops me in my tracks every time I come upon it during holiday TV programming. A morality tale about community, love, and friendship triumphing over capitalist greed? More, please! From George and Mary’s firey courtship (and face- kissing); to Uncle Billy’s scared, confused face when he realizes he’s lost the $8,000 (breaks my heart every time); to Barrymore’s deliciously sinister Mr. Potter (he actually claims the #6 spot on the American Film Institute’s list of Greatest Film Villains); all the way to that moment at the end where Jimmy Stewart comes back to reality, and pulls the top of that broken railing off, and suddenly realizes how happy he is to be who he is, where he is, when he is (I tell you what, it brings on the waterworks every time); it’s start-to-finish my favorite holiday classic.

So imagine my excitement when I learned that Taos Onstage, the newest in an ever-growing, eclectic collection of Taos theatre groups, is debuting with It’s a Wonderful Life, the Live Radio Play, out at Taos Mesa Brewing tonight and tomorrow. I dropped by their final rehearsal last night to check it out, and here’s a sneak peek at what’s in store: 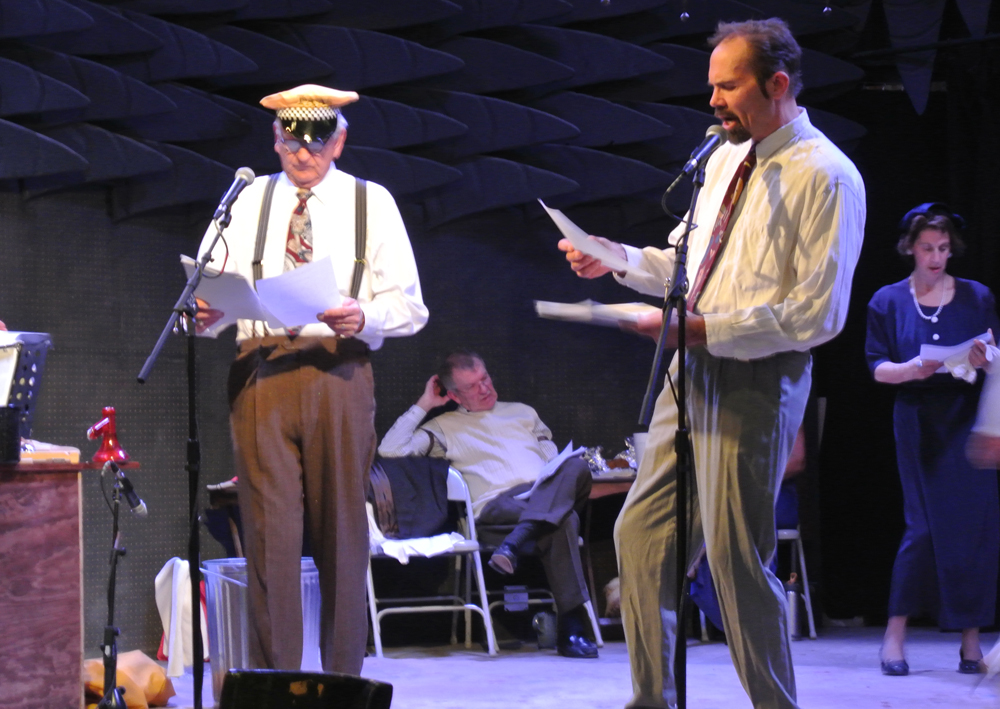 Charlotte Keefe, Susan Lewis, and Dianne Davis started the company Taos Onstage in an effort to bring new and different theatrical opportunities to the burgeoning community of Taos actors. They’ve put together a cast of twelve, plus a foley artist (sound effects deployed efficiently and hilariously by Helen Rynaski) and pianist (the multi-talented Rick DeStefano) to bring this show to life.

The radio play script is based directly on the movie, so you’ll recognize all the characters you love — even in this distinctly different setting. Live radio plays are an interesting beast — part staged reading, part rehearsed play. Reader’s Theatre on steroids. The actors dress in costume, and they all sit onstage for the entire show, taking turns approaching standing mics to deliver their lines. Sure, they’re reading off of scripts, but you’ll soon look past the papers in their hands and just enjoy the story.

There are a lot of familiar faces here (like David Perez as a charming and strikingly well-cast Clarence), plus some that are likely new to Taos audiences — such as Dixonite Jeff Spicer, the actor playing George Bailey himself. I’ve been fortunate enough to work with Spicer on a number of projects, and I’ve rarely seen him pick up a role more well-suited for him — his dead-on Jimmy Stewart voice alone makes this show worth seeing.

We recommend this show across the board as a great way to get into the Christmas spirit, if you’re not there already. Come at 6pm for a buffet dinner — but make sure you call in advance, as pre-sales are already through the roof!

And at the Toolshed in Dixon on December 21 at 4pm!