Live theater is SO HOT RIGHT NOW!  The Complete Works of William Shakespeare (Abridged) [Revised] has just sold out (YES, SOLD OUT) its entire opening weekend. Teatro Serpiente has kicked off its 2013 season with a bang! 3 actors riffing on the entire (37 plays) SHAKESPEARE cannon in just under 2 hours. The laugh-to-minute ratio is  right up there with a really good night of SNL. (If you are thinking about going to one of this weekend’s performances: Thursday (tonight!) in Dixon, or Friday & Saturday back at the Harwood,
STOP READING NOW & CALL: 575-737-8574 & reserve your seats, operators are standing by!).

Alright: back to our regularly scheduled program: An Interview with Gina Gargone, director. 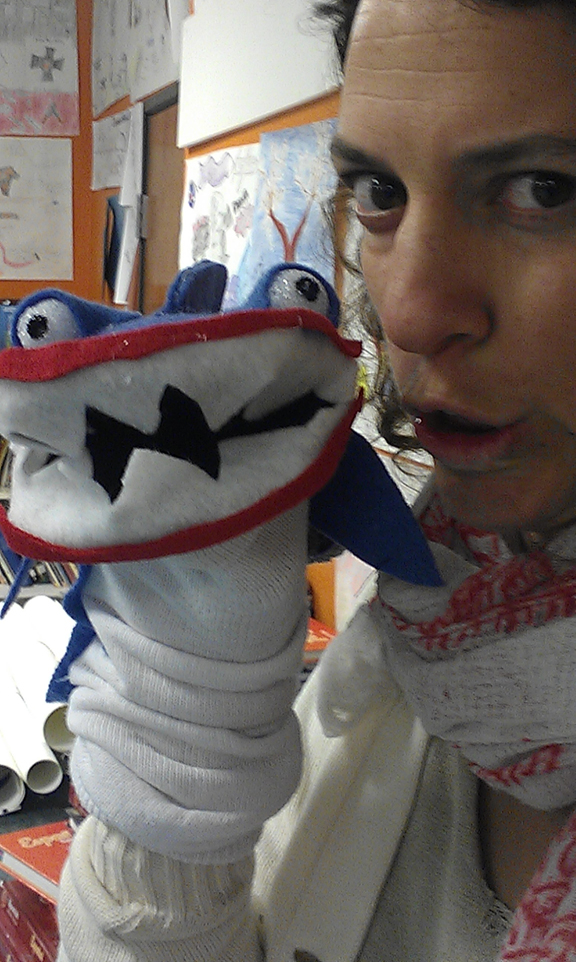 Throat Culture & LIVE TAOS sat down with the play’s director, Gina Gargone, & hit her up for some behind-the-scenes info. It went down like this:

TC: Where did you find this play?

GINA: The script was brought to the group by Adam (Overly) before I even came on board. They were talking about doing the show during As You Like It, (Summer 2012) which was my first Teatro Serpiente production. And then they all [Adam, Rich Greywolf, and Scott Tennant] wanted to be in it so they were like…who’s going to direct us?

TC: They had a play, but no director?

GINA: Which worked out really well, because I had seen it done in New York.

LIVE TAOS: It launched at one of the “fringe Festivals.”

TC: I thought it was California guys.

GINA: No. They’re Brits through & through. Which is why, I think, they can get away with what they’ve done. They love their Shakespeare which you can tell from the care they put into their script.

TC: I didn’t get the impression that they had any familiarity with Shakespeare beyond Romeo & Juliet & Hamlet.

LT: I disagree, I think they really know their stuff & the whole point is: “it doesn’t matter that we know our stuff, we’re trying to make a fucking funny, ludicrous show” & the point is people are so tired of being introduced to Shakespeare in a deep, serious way & instead let’s make it accessible, let’s make it weird & goofy. 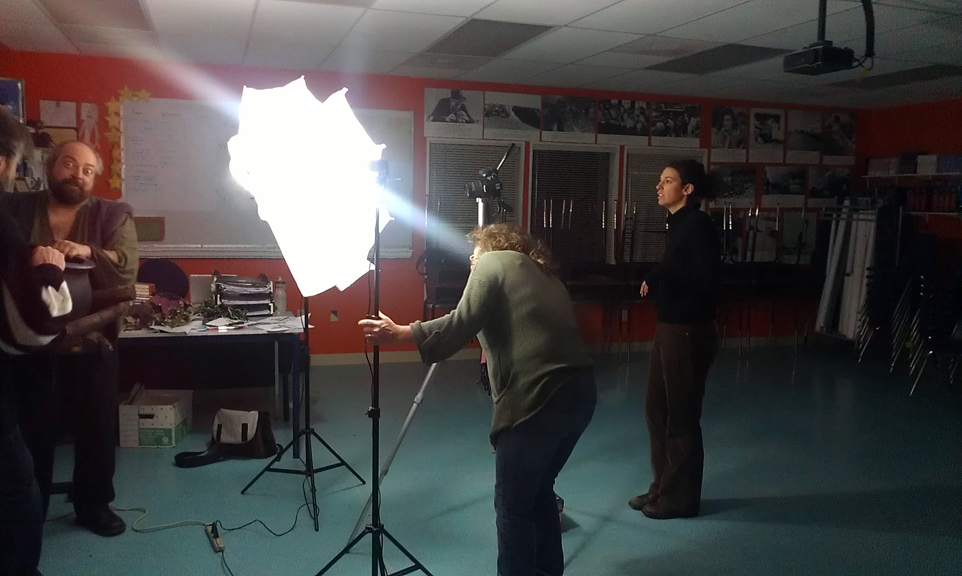 GINA: The reason that I do think they have scholarly knowledge is that the “Titus Cooking Show” (skit) has some stuff the average person wouldn’t know to put that together.

TC: So, how did you go about directing this show?

GINA: Welll … since I am not a trained director — the training I received was in acting — so … going into this show, what I thought directing was is so not what I came out with, which is good. Because if I hadn’t made that shift I don’t think we would have got to the place we got to; we would have stalled out on purely “acting” notes. Because, really, when I started out, I was looking at all three of them from an actor’s perspective. I knew I had to give blocking — which was easy for this show, because there’s three of them & they are onstage almost all of the time.

GINA: Blocking is where you create dynamic movement on stage, so people aren’t just standing there in a clump. For certain points in a scene you tell people: “now you’re going to cross down here, now you’re going to move over here,” & you do it off of the text. A perfect point is when Adam has his “Twilight” freak-out & he gets all upset & he moves off to stage right & he isolates himself because he is upset. So you use their emotion that is going on in the scene to base their movement.

TC: So you tell them when to go offstage.

GINA: A lot of the physical comedy is already in the script. We brought a lot to it & we improved upon it. But there was a great road-map already written in the script.

LT: With a small cast of actors that know each other really well a lot of things arise organically & so they are not intentionally “directed,” but when you see them … I’m thinking about when Adam goes over to stage right to sulk, & there’s another scene where Scott goes to the same place to sulk — & at the time of directing the play, you probably weren’t thinking to yourself: “Now go to the sulking corner!” 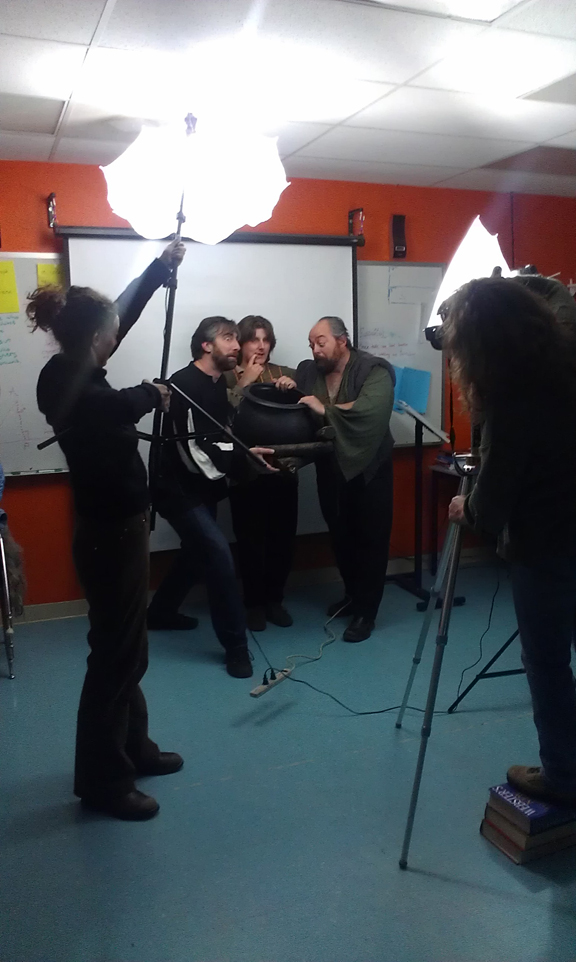 TC: As director, you’re looking at the play from above.

GINA: That was actually the hardest part for me, because I was still thinking like an actor … & I wasn’t looking at the show as a whole until maybe a week & a half before it went up. & I was looking at lines, character choices, then all of the sudden I realized, “I have not watched this show yet” — I have no idea what it looks like from start to finish — & that’s probably my job! That’s probably something I should be thinking about already.

We were aware that we had stalled, & we didn’t have a show that we would have been happy with. All four of us knew that. I realized I need to do less worrying about lines & character relationships, & I need to see how the show looked, & once we did that, I realized we needed to make a couple changes.

TC: Changes in the script?

GINA: Not changes in the script, but some of the gags that we had been doing — which were funny in the moment, because all four of us were in the same room — but instead, thinking of it as an audience seeing it for the first time, & so it was like, no, that’s not really funny … because they were just inside jokes that we had developed in rehearsal. I worked with Rita (O’Connell) on that because she came back into the mix at that time, & we made some changes. Not a lot of major changes, but a lot of minor changes. 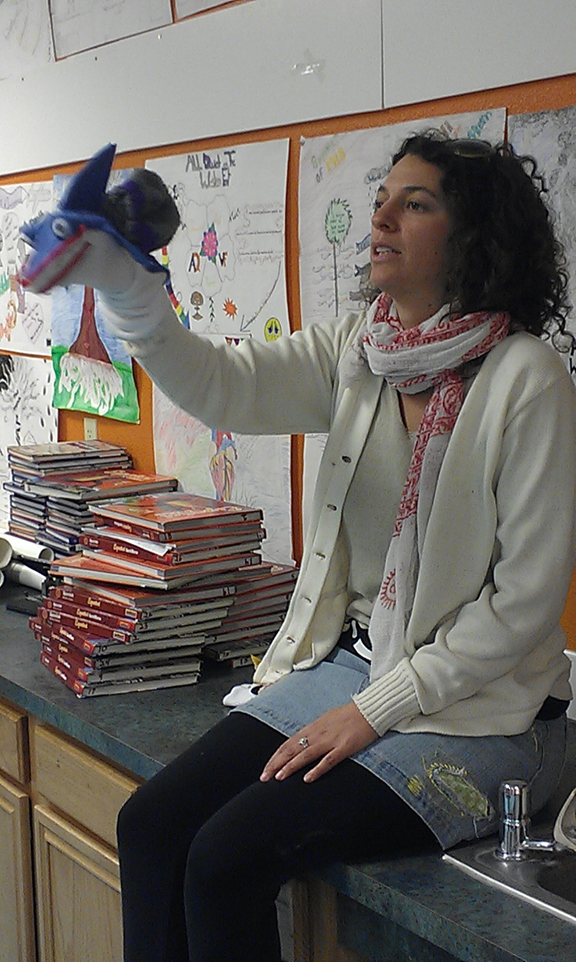 LT: So what about the role of the director when you are working with peers & friends — which Teatro really is — & because “everybody’s supposed to get a turn,” & there are some people with more experience than others…it’s an interesting set of relationships to navigate.

TC: I think you succeeded.

GINA: No, but there were nights when we left really disheartened.

TC: With each other? 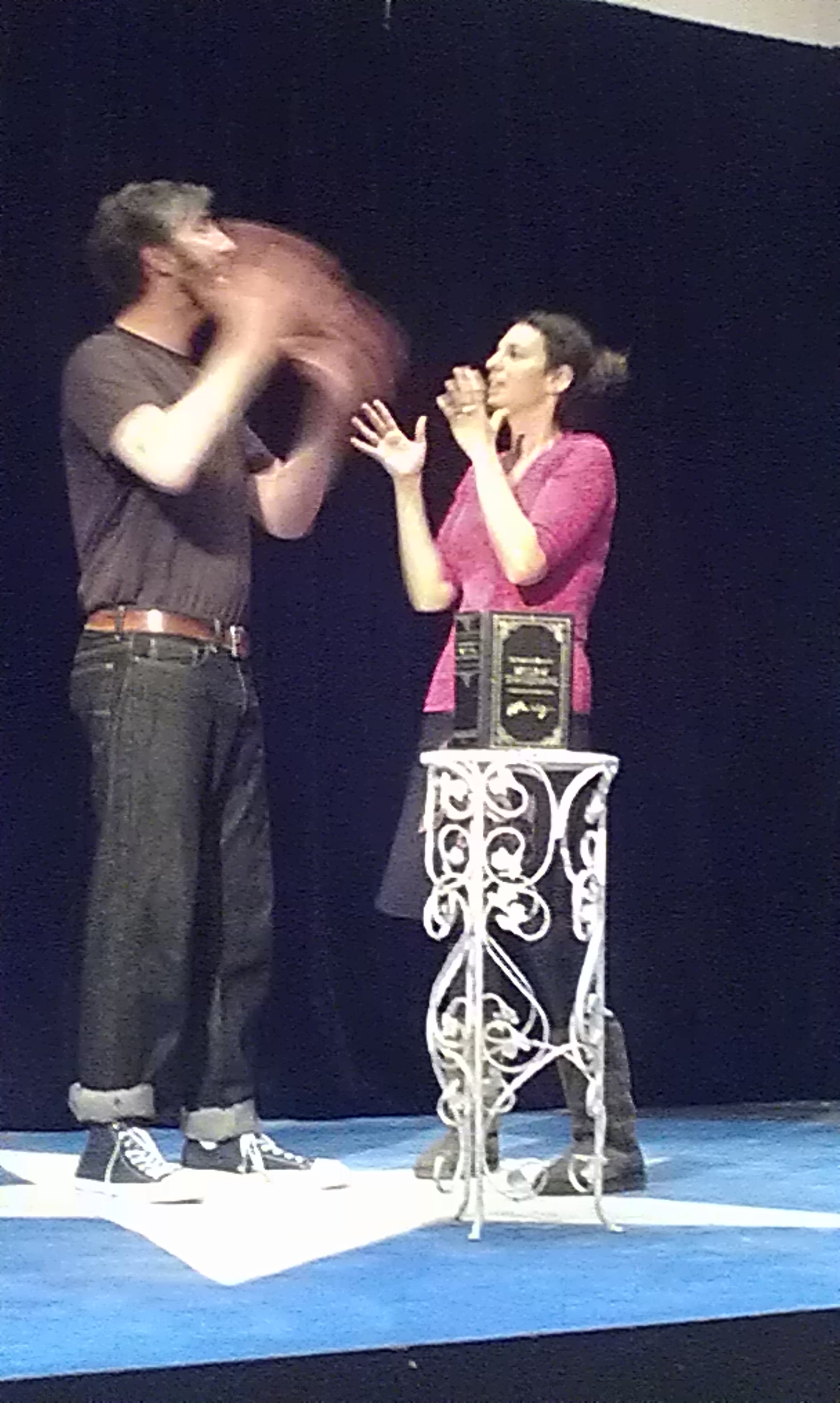 GINA: No, & that’s the thing that I think is really cool about the relationship we have — because it is built on trust. I don’t think we were so disheartened with each other, I think we were just disheartened with what we were doing. The reason I was able to say: “this is not working,” & “no, I don’t like what you are doing,” is because I looked at myself & I looked at my friends on stage & I said: “OK, we all want to put on a really successful show & I have to say something, or else it won’t be.”

LT: You can’t coddle people just because you are friends with them.

LT: People are clearly so desperate for laughs. It’s great that Teatro’s doing light, comic shows, but there’s also something about community theater, & seeing someone that you know doing weird, silly stuff.  It’s ludicrous to see your child’s 8th grade teacher running around with a wig on. People started laughing the minute Rich & Scott walked out. They didn’t do anything funny — they just appeared. Comedy!

LT:  Traditional theater standards be damned! This is fun! 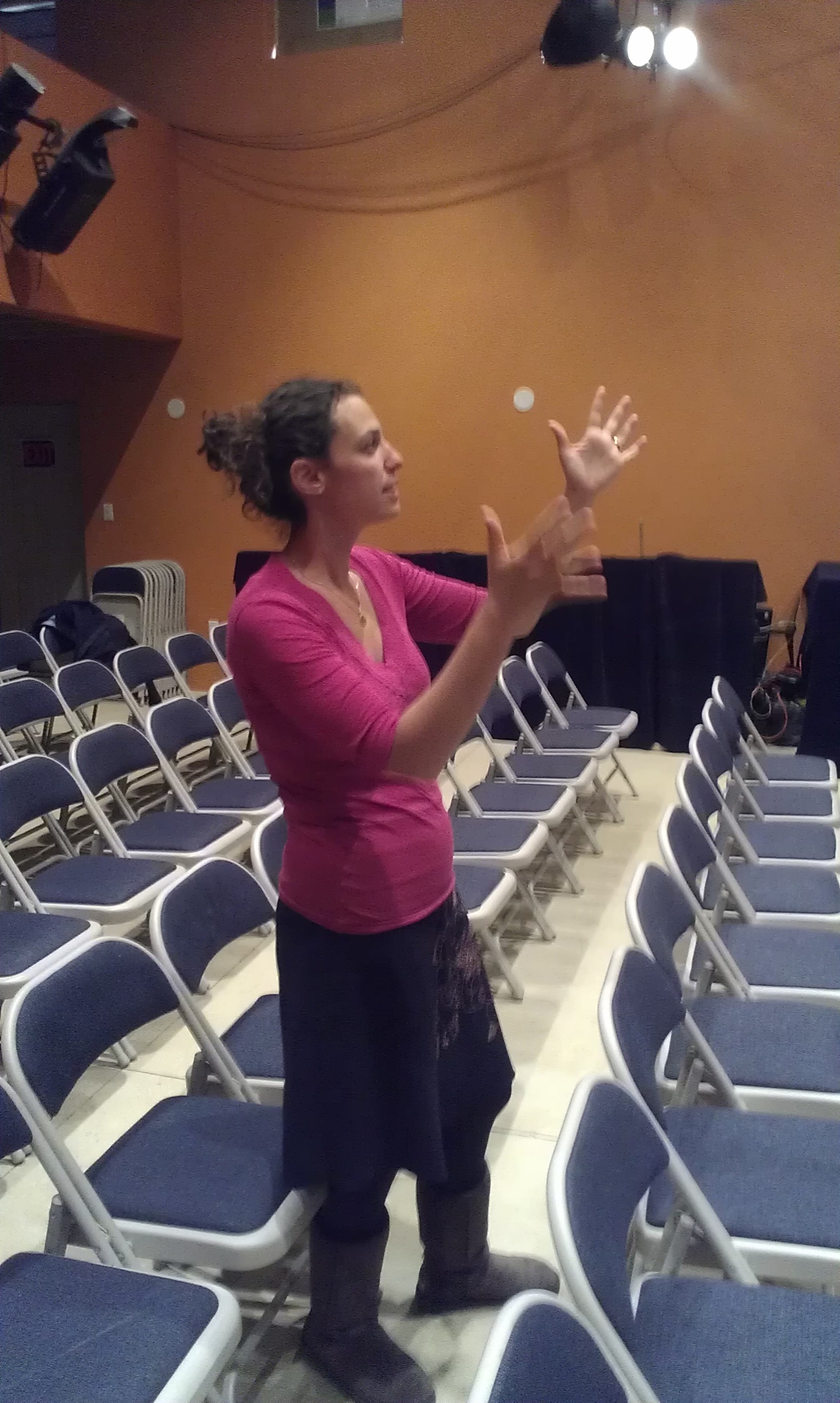 GINA: Because that’s what makes community theater work. What I like about Teatro is that there’s passion, there’s knowledge, but also, we’re willing to make fun of ourselves & we are actually willing to get the whole community involved. You don’t have to be a trained actor to be onstage,  & we will love you anyway.

TC: I think Shakespeare can handle it.

And that was such a great success that it turned into a whole company with year-round offerings at venues all over town! ALRIGHT: At this point, the three of us — Rita, Gina, & I — went on talking for another 2 hours: trying to define Community theater, why  ‘fun’ must also have a role, casting, gossip, & of course William Shakespeare: now starring as a  guardian angel for theater freaks everywhere.

LT: And we promise to get to the rest of that later, as we head into what’s shaping up to be a booming 2013 theater season here in Taos! We’ll be bringing you promos and coverage of all the performances from all the various theatrical groups and individuals, so stay tuned — and we’ll see you in the crowd.