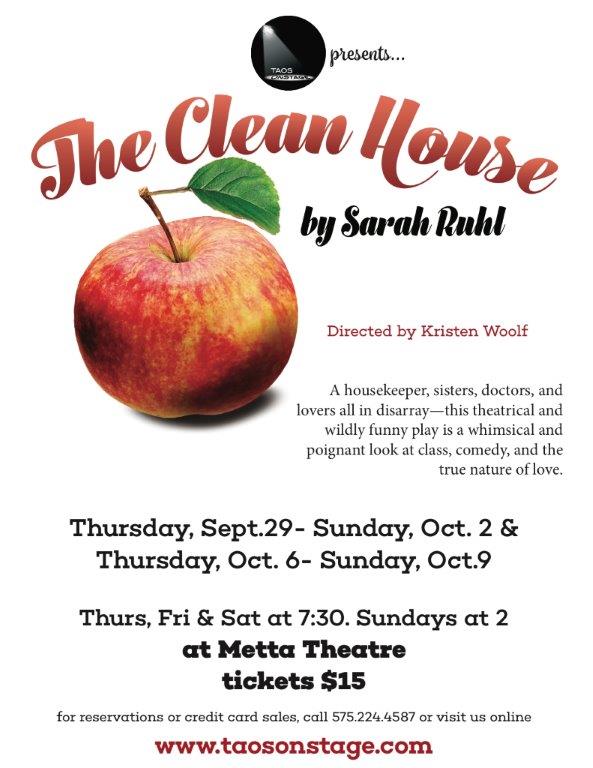 For the answers to these and other perplexing, puzzle-piece questions, you’ll have to come see Taos Onstage’s production of The Clean House by Sarah Ruhl, playing at Metta Theatre September 29th through October 9th.

The story is by no means easy to summarize, for what starts simply as an argument over cleaning the living room of two married doctors quickly becomes a complex, charming exploration of love, loss, and how we enjoy what precious little time we have on this crazy planet.

Kudos to local theatre artist Kristen Woolf for selecting this complex, witty play to direct as the first installment in the 2016-2017 season at Taos Onstage. As Kristen describes it, she was offered a choice of three possible plays, and The Clean House stood out to her right away. She notes, “I like quirky plays; I like things that show the contradictions in human nature.” We are the beneficiaries of this strong play choice, as Sarah Ruhl’s work comes alive here in Taos soon. Kristen, who has been doing theatre all her life, brings a strong background as an actor, opera singer, and director to this latest production in Taos.

In this production, Lisa Orwig plays Lane, the stern doctor who would rather pay someone else to clean her house. Sorché Morgan plays Matilde, the would-be housekeeper whose real talent is telling jokes. Charlotte Keefe plays Lane’s sister, and Lee Imboden plays her husband. Ruth Fahrbach plays a mastectomy patient. The cast has great comedic timing, which is marvelous. Ruhl states in the script, “Everyone in this play should be able to tell a really good joke.” You’ll be laughing out loud; I certainly was in the rehearsal I got to sit in on.

At first blush, this play seems to reinforce racial stereotypes in casting a Brazillian woman as a housekeeper to the white affluent. However, like much of Sarah Ruhl’s work, the play turns these tropes on their head, giving the would-be housekeeper an allergy to cleaning and the stoic white woman exposure to her vulnerability through her husband’s infidelity. Kristen remarked, “All of these characters are multi-dimensional.” In fact, the majority of the women in the play do not enjoy house cleaning. I think Betty Friedan, author of the classic The Feminine Mystique, would have been proud of the text, which decries ruefully about women and housework: “I wanted a task.”

Let’s make it our task to unravel the mysteries in this astonishing play, but let’s not think too hard about it. Above all, this is a modern comedy par excellence, and this production elevates the circumstances, so that the farcical is evident in the realistic. Because let’s face it: When you look at it a certain way, life is very, very funny.

Thursdays, Fridays, and Saturdays at 7:30pm & Sunday matinees at 2pm