FROM PALESTINE TO PEÑASCO – THE GAZA MONO-LOGUES:  AN ADAPTATION IN 5 VOICES TELLS STORIES OF PALESTINIAN YOUTH LIVING UNDER OCCUPATION.

On December 27th, 2009, Israel launched a military campaign against Hamas, the Palestinian group that controls the Gaza Strip. By the time there was a ceasefire agreement (January 18th), there were 1,440 dead and 5,380 injured Palestinians. On the Israeli side, four dead and 340 injured. The three week event became known as the Gaza Massacre.

Fast forward to 2013 when Iman Aoun, actress and co-founder of Ashtar Theatre, came to Española as a CEC Artslink Fellow where she conducted various Theatre of the Oppressed workshops, met with Native American and Hispanic artists, and talked about her work in Gaza and Ramallah. That’s where her path crossed with Rebekah Tarin of the Peñasco Theatre Collective, whose mission is “to raise awareness about local and global justice issues and the ways in which art can transform individuals and communities.” 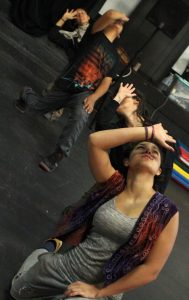 After a couple years of collaboration, we have The Gaza Mono-logues: An Adaptation in 5 Voices in performance in Peñasco.

Tarin is the director. She holds a quiet intensity and a steady, unhurried manner. We discussed how even though this piece originates from a war-torn area in the Middle East, there are themes relevant to our country now; one being domination by one group of people over another. She said that one of her first conversations with Aoun was about “the legacy of colonialism, land loss, displacement and historical trauma…about the healing and transformative capacities of performance and art.”

The performance “incorporates dance, acrobatics, dramaturgy, and visual art and [is] accompanied by a compelling original score, an intergenerational cast of indigenous artists and artist of color…”

I think that last bit is important. That this an “intergenerational cast of indigenous artists and artists of color” is something to be excited about. Us theatre goers would do well to consider the seeds and sources of our entertainment. William Sandoval (13), is a musician and actor from Española; Malaya Peixinho (15) and Hope Orange (15), are art students at New Mexico School For The Arts; Serena Rascon is a dancer, aerialist, choreographer, arts educator who grew up in Velarde and Española. She choreographed various movement pieces and consulted on the production. Kayo Muller, who also helped develop the piece, is a circus arts performer and arts educator, originally from Brazil, who calls New Mexico home. Samia Assed and her daughter Iktemal Jaber are Palestinian-American artists, activist-performers living in Albuquerque. They did the voiceovers for parts of the “mono-logues” in Arabic. Luis Guerra composed the music. He’s a musician and composer who used to live in Albuquerque, but now lives in Los Angeles. 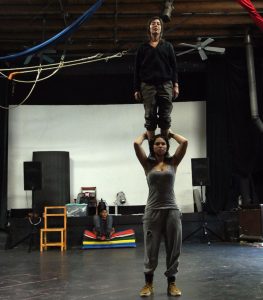 Kayo Muller stands on Malaya Peixinho’s shoulders during rehearsal at the Peñasco Theatre.

Tarin makes clear that “the creative process was a collective endeavor” and that “actors were given space to craft their scenes, develop movements authentic to them and contribute to the overall aesthetic of the piece.”

Since the ceasefire agreement in Gaza in 2010, sporadic fighting has continued. Major incidents came to national attention in 2012 and 2014. This is one of those areas in the world where conflict is easy, peace is hard. We’ve all seen the news over the years. What Tarin and her collaborators have created lets us drop below the buzzwords and hear perspectives from the heart of human realities.

Tarin says, “I felt very moved and inspired by the resilience of these young Palestinians, of their poignant observations of their situation and their ability to dream of a future despite living in the largest open air prison on earth.”

Showtimes are Saturday October 8th at 7 p.m. with a matinee on Sunday October 9th at 2 p.m. Adult tickets are based on a sliding scale from $20 to $10. Youth tickets are $5 and children under 12 are free. For tickets and more information please visit PCT’s website. 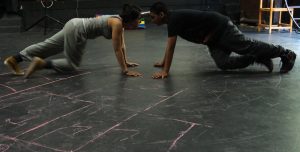 Malaya Peixinho and William Sandoval rehearse a scene that begins with kicking a can back and forth.

All photos taken at rehearsal by Elayna Snyder