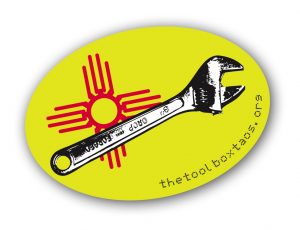 Christina Sporrong is an impressive woman. Artist, welder, aerialist, choreographer, educator, mother, mayhem creator — the list goes on. When we sat down at Coffee Cats in March to talk about her newest project, the forthcoming Taos makerspace, it struck me that there is indeed an appropriate use of the word “fierce” as a human adjective, and that would be when describing Sporrong. Fortunately for Taos, she’s turning her inner fire towards a project that has tremendous implications for the entire community: The ToolBox, of which Sporrong is the director.

She’s working alongside an equally-impressive group of Taosenos. The ToolBox team is made up of Howie Roemer, Matt Thomas, Agnes Chavez, Eileen Peterson, and Rachel Cohen, with Liz Neely and Juniper Manly acting on an advisory board. Across the board, these folks represent the best of local artists, entrepreneurs, and activists who get shit done. They’re

not just sitting around talking about how great it would be to have a Makerspace in Taos — they’re forging ahead to make sure it happens, and happens right.

The ToolBox has been getting a ton of local buzz since they first dropped a facebook page and website into the internet earlier this year. It’s a project that all Taosenos can get excited about, and by all appearances they’re doing so eagerly. But let’s back up for a second:

“The term makerspace was coined by Dale Dougherty, the founder of MAKE Magazine, MakerFaire — Maker Media is his project,” Sporrong explained. “The maker movement is in response to a failing educational system, and to technology that is moving so fast that people don’t really understand it. It’s an answer to this movement of ‘buy everything, and then throw it out and buy new things,’ and have no foresight, no self-sufficiency, no power over anything. And it’s in response to kids not learning any creative tactile stuff anymore in school.”

It’s a young-ish movement — MAKE magazine only launched in 2005 — but one that has caught fire quickly. Now, there are makerspaces all over the world, and although they all look somewhat different, the core concept is pretty basic: big, shared, community-driven space where people can make, and learn how to make, all kinds of stuff. 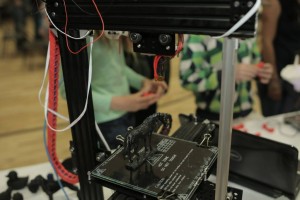 “The irony is that this culture especially, this tri-cultural area of northern New Mexico, has been a maker culture forever. Maybe only two generations removed, everyone used to make things and fix things and repurpose things. It’s engrained in the culture. But technology and consumerism came in and swept that away,” says Sporrong. “This is a really deliberate movement with its foundation in STEM-Arts; this creative mad-scientist kind of thing where you get to own your technology. Where you can build your own computer, where you can take apart your cell phone and hack it and do crazy things with it.”

Makerspaces are manned by people who are passionate and skilled at what they do — you don’t have to be a certified teacher to offer up your knowledge. It’s really more like a mentorship space than a traditional learning center. There are no grades, no credits, no semesters. Workshops and classes will be offered based on what the community needs and wants and has at its disposal. “Like 3D printing, or hacking a phone; like Arduino or Raspberry Pi – it opens up this whole other world, and it potentially creates a new economy in this region as well.

“And you try to reach the fringes,” Christina adds. “It’s not just some hipster space for the wealthy — you’re really trying to bring in people who don’t have access to any art, or to making anything. For me it’s a community building thing. Let’s get together, let’s make stuff together, with that spark of owning the world we live in today, this technology that’s so strange.” 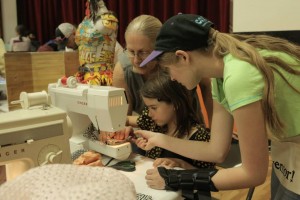 Older-school maker methods will be well-represented, too. Although they know that The ToolBox can’t be everything for everyone, the plans include space for sewing stations, printmaking, welding, soldering, and more — old technology living happily alongside new. This collaborative focus will be further supported by their vision of sharing the space with local public radio affiliate KRZA and with Taos Amateur HAM Radio operators.

Speaking of the space, where will it be?

The ToolBox crew presented to the Town Council in February and asked for use of the former Town Police/E-911 building, over on Civic Plaza Drive, as the physical space for The ToolBox. Although there’s as-yet no official word on this, The ToolBox team has felt great support from the Town so far.

“They’ve been very positive, and they want to assist us in making this a reality,” says Matt Thomas, another brain behind The ToolBox (artist, architect, and community-builder, Matt is perhaps most-recently known in Taos for his work spearheading The Paseo, as well as for leading the local Pecha Kucha nights). Thomas emphasized that The ToolBox team has been focusing on gathering local support and moving forward strategically — better to do it right than do it too fast. “We’re currently applying for funds, building community support, and planning a series of different pop-up events that will be happening all summer.” 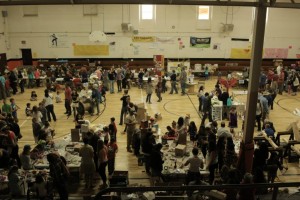 The support of the community is already evident. This past weekend at Enos Garcia Elementary School, The ToolBox teamed up with Twirl and many other local partners to put on an Invent Event, essentially a mini-maker faire. It was billed as “a community celebration of creativity and technology,” and the turnout was truly amazing. Everywhere you looked, Taos families were playing, exploring, learning, inventing, making. The afternoon cast the potential impact of The ToolBox into gorgeous light: people of all ages and from all walks of life being exposed to tools, technologies, and skills that can make our whole community stronger.

For years, we’ve all been hearing the term “DIY” — Do It Yourself — more and more frequently. The maker movement takes DIY one step further, to DIT. Do It Together: it’s a powerful call to action, and one LiveTaos is excited to get behind.

So, when can we play?

Because they’re still waiting to hear from the Town, as well as organizing their nonprofit status and other logistical parts and pieces, there’s no official launch timeline for The ToolBox. However, it seems likely that we’ll see something manifested by fall. But you can be on the lookout for those pop-up events hosted by The ToolBox between now at then!