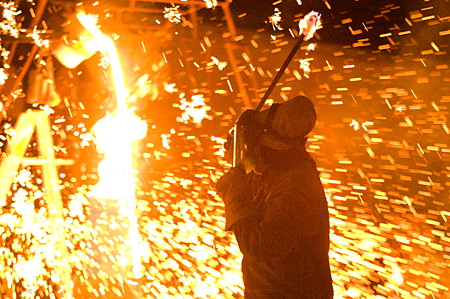 This Saturday, September 14th, a new brand of unique entertainment and dramatic spectacle takes place at Taos Mesa Brewing (TMB). New Mexico Craft Brewing (NMCBC) of Las Vegas, NM, partners TMB in hosting the Iron Brew event. Along with presenting the new flavors of the NMCBC brewery, TMB is the venue this Saturday for a breathtaking display of molten metal, sparks, fire, and the collective creation of original large-scale iron artworks on-site, never before seen in Taos.

The “Brew Crew” (NMCBC) includes Josh Woodlee, Ben Remmers, Kyle Yonan of Las Vegas NM, and Taos resident Justin Kaysing. They met in college, at NMHU; Josh Woodlee had been craft brewing as a hobby for years already, and everybody who tried them loved his creations. The crew started to play around with making their own beers as a group, and dreamed of starting a brewery together.

A few years later, in 2012, a serendipitous union with entrepreneur Miguel Melendez empowered New Mexico Craft Brewing Company to become a reality. After brewing for a year to critical acclaim, they are currently opening their venue/pub location in Las Vegas, NM. The NMCBC and TMB are affiliating to serve their communities in partnership in honor of craft brewing as an art and a locally-sourced industry building steam in northern New Mexico.

The Brew Crew of NMCBC has a long history of participating in Iron Tribe exhibits and “performance pours,” and Saturday’s event brings their artistic affiliations to the brewery mix. Iron Tribe is a contemporary iron art exhibition, hosted biannually at New Mexico Highlands University. David Lobdell, professor and creator of Iron Tribe, says “There’s a huge variety of ideas, emotions and techniques expressed through media like forged steel sculpture, traditional cast iron sculptures, iron paintings… when you pour 2200-degree metal into a wooden mold it sputters and spits, …performance casting is an industrial dance of movement and fire, with music.” 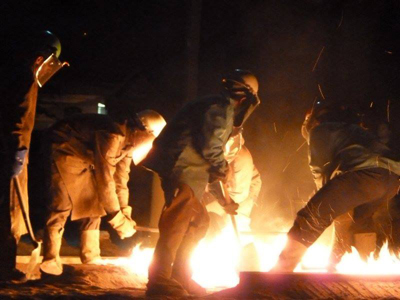 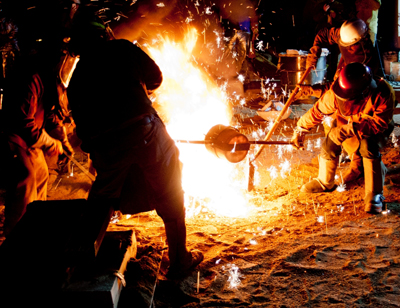 International artists featured in Iron Tribe exhibits have hailed from Ireland, Scotland and Wales, on top of American participants from California to New York. Several Iron Tribe artists will be participating, with Lance Wadlow as the furnace-master for the event. Wadlow’s iron artwork is shown nationally, and he is a featured artist in the ArtSpace Gallery and Studios in Marquette, Kansas.

Fires will be lit at 4:00 pm, with metal-pouring continuing until the full performance-pour begins at dusk.

The Iron Brew takes place at the Taos Mesa Brewing Company, 2 miles west of the “old blinking light” on Hwy 64, Saturday, September 14th. This performance is free to any and all– you don’t want to miss this one!