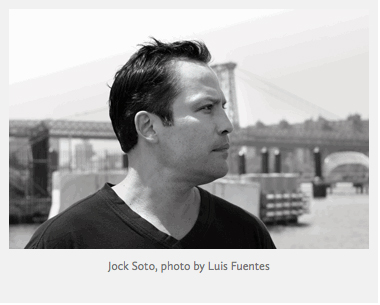 This Friday night, come out to the TCA for an evening with one of America’s most important living dancers. Jock Soto, an openly gay man of Navajo and Puerto Rican descent, was chosen at age 16 by George Balanchine himself to join the New York City ballet. During his twenty-four years with the company, he was a featured dancer in more than 40 ballets  — many of which were roles created specifically for him.

The evening begins with a reception and booksigning for Mr. Soto, who has just published his memoir Every Step You Take; and is followed by a screening of the award-winning documentary about Mr. Soto’s life, Water Flowing Together by Gwendolen Cates.

The film begins when Soto is 40, and preparing to retire from his storied career. Born on the Navajo reservation in Gallup to a Navajo mother and Puerto Rican father, and raised all over the Southwest, the film and Soto’s memoir alike reflect on his complex heritage and look ahead to an uncertain future — from the age of 5, ballet was all Soto had ever wanted to do.

The good news is that so far, the story has a happy ending (spoiler alert!): Mr. Soto continues to teach at the New York City ballet, and, now married to trained chef and sommelier Luis Fuentes, is pursuing a culinary career.

This is a rare and lovely opportunity to learn about an American artistic legend, both through his own eyes and through someone else’s. “We have such incredible talent here in the Southwest, and sometimes I think we don’t celebrate that as much as we should. It’s special to be able to do that with this event,” said the TCA’s executive director Deborah McLean.

Tickets are available now or at the door. The evening is a fundraiser for the Enchanted Circle Gateway Museum (a small museum in Eagle Nest) and the Taos Center for the Arts.