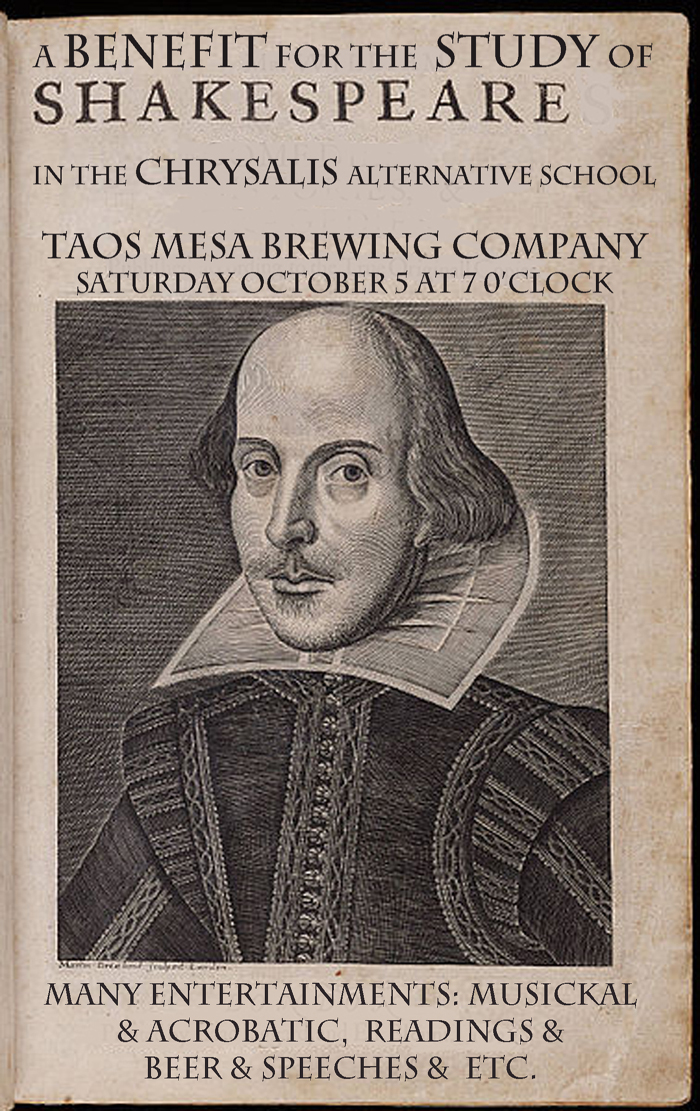 The BENEFIT for SHAKESPEARE at CHRYSALIS will be Saturday, October 5 starting at 7PM. Suggested donations from $5-$25 will be appreciated at the door! There will be righteous swag for anyone contributing $25 or more.  A DONATE button is located at the bottom of this article for those who are not able to make it to the show, but still want to contribute.

SHAKE it UP, SHAKE SPEAR! is a direct-action benefit to provide a Shakespeare studies program at the Chrysalis Alternative School. This is a class I first taught at Chrysalis 2 years ago. We spent a semester studying Shakespeare’s Romeo & Juliet: reading from the text, doing movement exercises, practicing dialogues, watching scenes & digging our way into the script like actors, critics, & audience. We had a lot of fun doing it & I know I learned a lot; if the students remember a word or two or just some feeling the play inspired, I am thrilled.

I tried to fund the class doing the standard ‘bow & scrape’ grant-proposal dance: the Taos Community Foundation, McCune & a few others — Nothing!  Maybe I forgot to dot a ‘t’ here or cross an eye there…who knows? I did come to find out that ‘at-risk’ high-school aged students aren’t funded as often as the younger kids; with one foot in the prison system, the ‘powers-that-be’ must be content that these kids are already half-way to contributing to their massive bank accounts. Without a teaching degree (though I do have a BA in theater from UC Santa Barbara) I was not able to get paid as a teacher & so after making it through one semester I had to walk away, the teaching gig being unsustainable without a little cash to keep things rolling.

FALL SEMESTER 2013! & A new season of Shakespeare is already underway: this time, 3 classes instead of two! We have analyzed the opening to Richard III (“NOW is the Winter of our discontent made glorious summer by this sonne of Yorke…“) & are starting to memorize:

“He’s mad, that trusts in the tameness of a wolf, a Horse’s health, a boy’s love, or a whore’s oath.”

Carlos Garcia & Orion Cervio (co-head teachers at Chrysalis) invited me back,  agreeing that this was a good class to have in the school. We decided that the best way to fund it is with a one-night bash at the Taos Mesa Brewing Co. (SATURDAY OCTOBER 5 @ 7PM) with bands, actors doing short scenes, acrobatics, & beer.

That, dear reader, is where you come in. This is, as I said before, a direct-action, arts-in-the-schools event. I will be like the coin-operated “Shakespeare robot” at the carnival: put $5-$25 in the little box & I will bounce around & teach Romeo & Juliet for a semester! If we reach our goal of $1500 (3 classes a week for 15 weeks) we will read our way through the play, watch 2 movie versions (Baz Lurman’s 1996 & Zeffirelli’s 1968) as well as doing our own readings from scenes. If we exceed this funding goal, we will be on our way towards Semester 2 — where we will work towards a production of the play: a FIRST for Chrysalis, & something we all look forward to.

Aerial Fabric on the Heron (acrobatics)

THIS EVENT is GRATEFUL to BODEGA FRESCA for their GENEROUS SUPPORT