It’s a sunny Friday afternoon. I’m standing in the middle of a gallery space just a few doors south of the Taos Inn; up until this month, the space had lain vacant. We’ve all seen them — prime pieces of Taos real estate shuttered and dark along the main road. It seems like some of these spaces open for a hot second and then, just like that, they’re gone. What is it about that main stretch of road through town? Locals avoid driving on it and visitors pace up and down, taking away snapshot perceptions of Taos. As I look out at all the traffic passing by, I’ve got to smile. I’m witnessing a new incarnation of this space. The Read Lockhart Gallery, run by the artist himself and doubling as an apartment with a small one-room studio in back, is reinvestigating our art scene in Taos. The galley opens its doors this Saturday, September 2nd with an opening reception from 3-9pm. The first exhibit is a collection of Read’s own pieces. 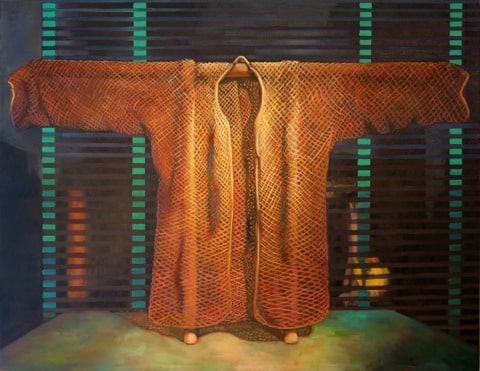 I have a blast talking to Read about his work. He’s very direct about it. He knows what it is. Standing in the middle of the space with its bare white walls pulsing in anticipation of works to be hung, the floor is a clutter of work — paintings of all sizes and charcoal and pencil sketches peppered amongst riots of color. His work runs the gamut of subject and style. It spills over into the back room where pieces overlap and burst out of cardboard boxes. As we stroll and talk, I’m passively soaking up what I can only think of as a prolific legacy in the making.

Read talks about his training and his passion. His impetus to paint was born out of intellectual curiosity, a style of examination he picked up in his undergraduate work at St. John’s College, Santa Fe. After college he trained in Florence, Italy, spent two years working in the copyist program at the Met, (you know, that whole if you want to learn how to paint like Rembrandt, paint a Rembrandt philosophy), and graduated with an MFA from Pennsylvania Academy of Fine Arts.

He mentions that along the way to becoming a painter, he first had to learn how to draw. While a daunting personal prospect, this makes absolute sense to me. It takes a certain kind of fortitude to work for four solid years in charcoal and pencil before ever picking up a paint brush. Because when I asked Read about his favorite medium earlier in the conversation he replied without hesitation, “I’m a painter.” Although trained as an observational painter, which is evidenced in several landscapes scattered throughout the room, Read evolved a style of what I envision as a painter of the inner mind. Dominating the room are some larger narrative-style paintings. Read only discloses to me that they are imagined settings later in the conversation. It only then makes sense to me why I’ve been so pulled towards these particular paintings since I first walked in. The stories are so vivid, so clear — memories and inspirations of the mind translated onto canvas. Read talks about these pieces with a verve that I see reflected back at me in his work. The space, the light and the color are all his own. He says it adds an air of mystery. I think to myself it’s indicative of a bottomless well of vision.

As we continue our conversation, I ask Read about this space. Why now? Before I retell that it’s just-one-of-those-Taos-things story, you need to know that at one tangential point of our dialogue Read confessed to me, “I never dreamed of having a gallery. I always dream of making paintings.” Oh, Life! What strange and wondrous paths you lead us down.

Read has been visiting Taos on family vacations since he was four. It was his parents’ favorite spot and they came back year after year; Read’s father being a photographer, it’s easy to imagine why. So while he’s no stranger to town, Read returned earlier this year after many travels and a landscape-painting road trip with his dog that turned into a six-week excursion. Upon realizing he was going to be in town for awhile, Read started looking for a place to stay, and asked real estate friends Keith and Martin to keep their eyes open. Lo and behold, they happened to have a place downtown right next door to their own live-and-work offices. It was primarily a gallery space, but happened to have a small living space in the back. Perfect for Read, since he was, you know, an artist and all.

Sometimes, it’s just that simple. Well, the inception anyway. Throughout our entire conversation Read has an army of family and friends bustling around installing dutch doors, hanging lights, painting moulding and doing whatever needs doing — quite a lot before the opening reception this weekend. For more details on the reception, click here. 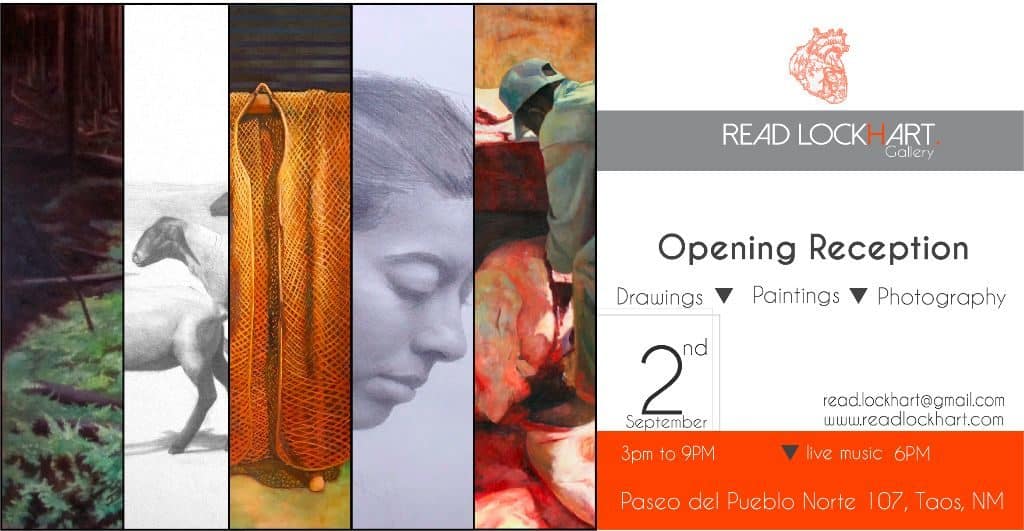 Read Lockhart Gallery is located at 107 Paseo del Pueblo Norte. It’s a small intimate space in which Read plans to exhibit his own work and that of friends from back East. Exhibits will change throughout the year. As I’m marvelling that Read could probably run rotating exhibits of his own work for many years to come, he casually mentions that he has huge 7’ by 12’ narrative paintings waiting in storage in Chicago which he’d like to get out here for a show later this year. Stay tuned for that one — I’m thinking epic.