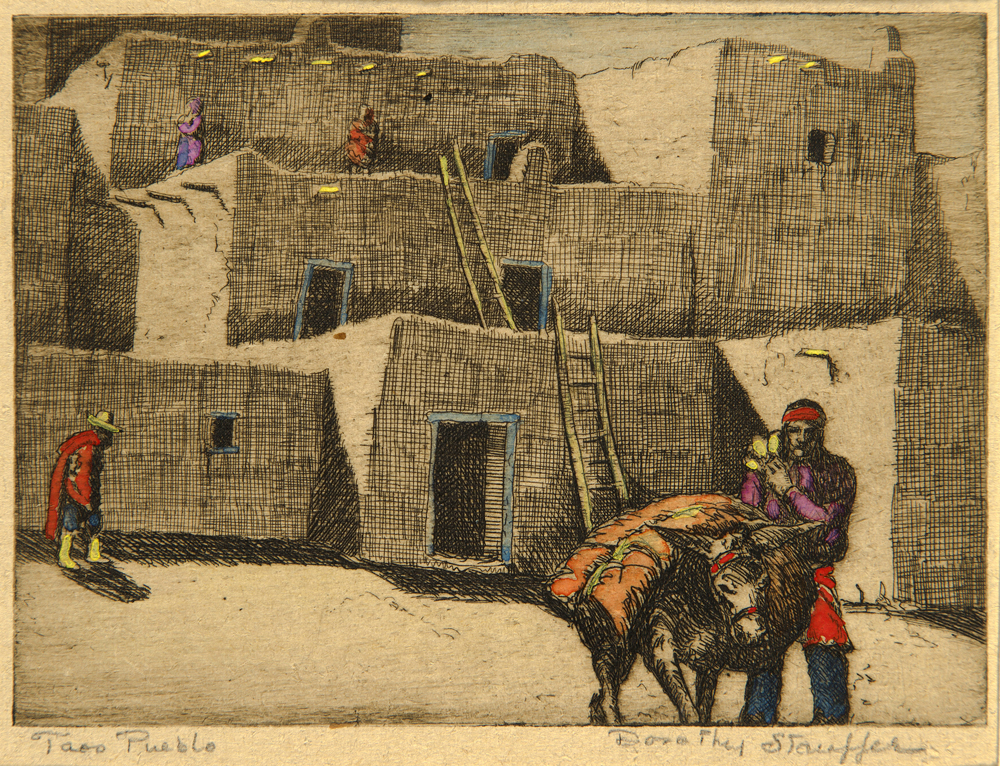 Pressing Through Time, an exhibition series which opened in Taos in late September and will hang through January, is a gigantic and exciting new undertaking surveying the history of printmaking in the valley from the 1880s through today. This community-wide series has pieces in nearly every Taos museum and multiple galleries, and will be accompanied by workshops, lectures, and demonstrations throughout the fall.

The first official exhibition of the series, featuring 83 prints — as well as calendars, books illustrated with original silkscreens, lithographs, and wood cuts — opened at the Harwood on September 25. If you missed it, never fear — the next opening, Pressing Through Time  (Contemporary Prints, Part 1), takes place at the TCA on October 1 from 4 – 6pm (and you can of course still catch the Harwood show).

Other museums and galleries now showcasing print exhibitions include E. L. Blumenschein Home and Museum,  Robert L. Parsons Fine Art, Mission Gallery, Chimayo Trading del Norte, and 203 Fine Art, with even more on the way in the coming months. Follow along at their website to catch all the openings and activities!

LiveTaos recently caught up with co-curators David Farmer and Robert Parker to learn more about Pressing Through Time: 150 Years of Printmaking in Taos.

LiveTaos: Tell us a bit about the history of printmaking in the Taos Valley.

David: Printmaking in this valley started in 1853, not with a press moved here but by trained artists who traveled here and returned back east with sketches or watercolors that formed the basis for prints produced in established centers for publications.  The first wood engravings of Taos scenes were based on sketches by Joseph Horace Eaton published in W. W. H. Davis’s book, El Gringo — New Mexico and Her People in 1857.

While some of the founders of the Taos Society of Artists made prints, they mainly focused on painting.  In 1919 Ralph Pearson moved the first fine art press to this valley from Chicago where he graduated from the Art Institute. In 1930 Gene Kloss bought this press to continue printing the remarkable etchings and aquatints that she had begun when first moving here in 1921. 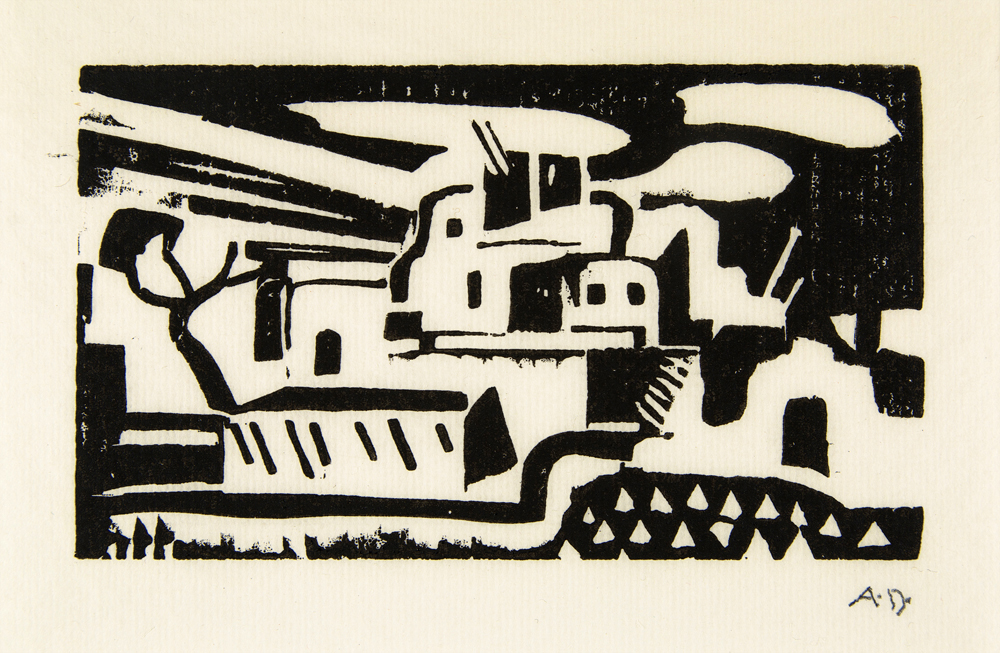 David: The current printmaking community is vibrant and active, with printmakers who work on presses in their own studios or participate in the printmaking program at UNM-Taos where a well-equipped studio with several presses anchors an ongoing set of classes in the art of the print.

Robert: The Taos printmaking community numbers  nearly 100. There has been a thread of continuity for many decades with today’s printmakers drawing inspiration from those that came before.  With new and emerging printing techniques such as solar plate etchings, non-toxic lithography on plastic plates, and innovative combinations of older techniques, the range of aesthetic imagery continues to grow and explore new horizons.

This is the first exhibition of its kind; what makes now the right time to present this show?

David: With the observance of the 100th anniversary of the founding of the Taos Society of Artists, we felt it was appropriate to draw attention to an often-neglected aspect of art in the Taos Valley.  The ‘Taos Founders’ were remarkable painters, and their legendary reputation overshadows the quieter art of the print, which actually has a longer history here than does painting. We felt it was time to fill in the picture of art relating to Taos Valley.

Robert: We also felt that printmaking deserves a broader exposure to the public as an art medium oftentimes less well understood than painting and sculpture. 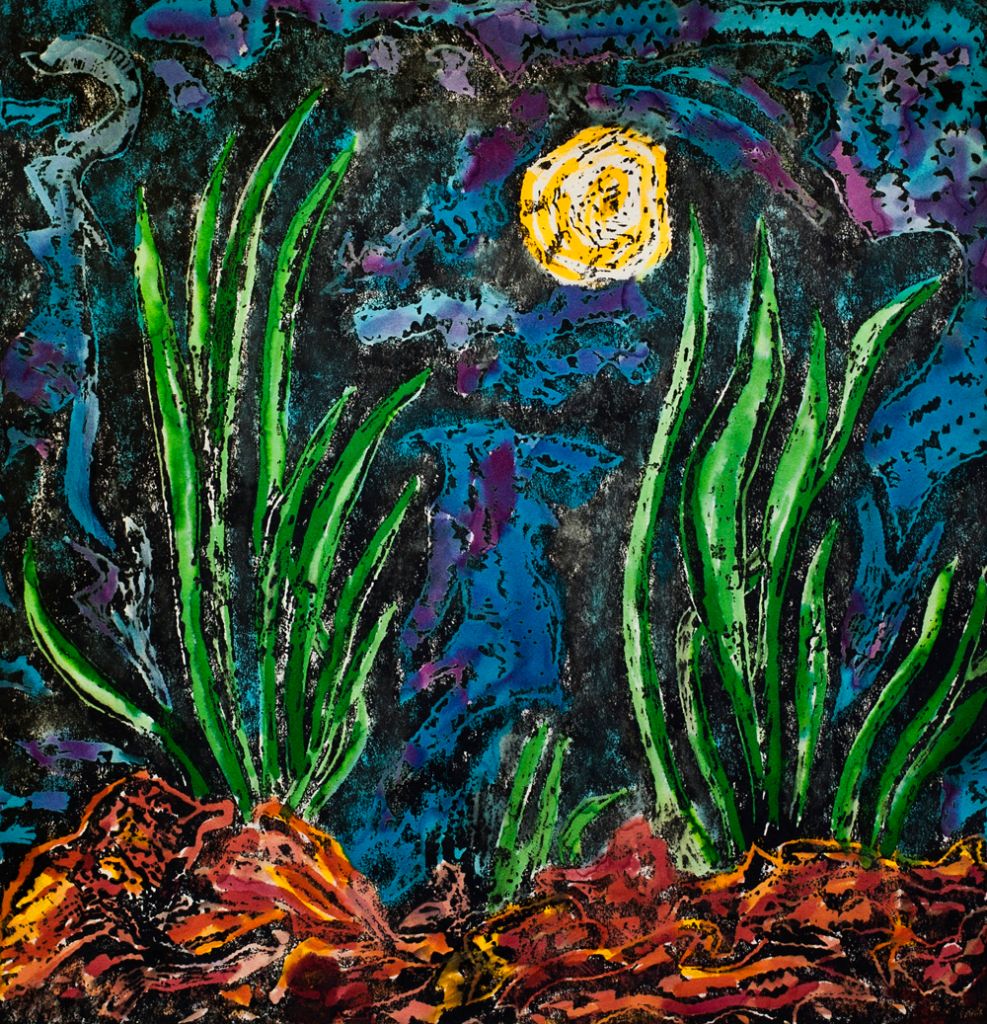 What are some of the educational opportunities available for interested/emerging artists and community members?

Robert: Pressing Through Time offers  several opportunities for people to learn more about printmaking. UNM – Taos is offering a two-day printmaking workshop on October 3 and 4, in their printmaking department.  Taught by Gary Cook, head of the print department, and Jennifer Lynch, master printer and teacher, the workshop will introduce participants to the basics of monotype printing. See the website for more information and registration.

Also, in conjunction with Pressing Through Time, a group of printmakers are offering classes in October to school children as part of Pressing On 5 at the Taos Center for The Arts, Stables Gallery.  Details for this are also available on the website.

Jennifer Lindsley, Ivory is Beautiful But Only on Elephants, 2014. Solar etching. 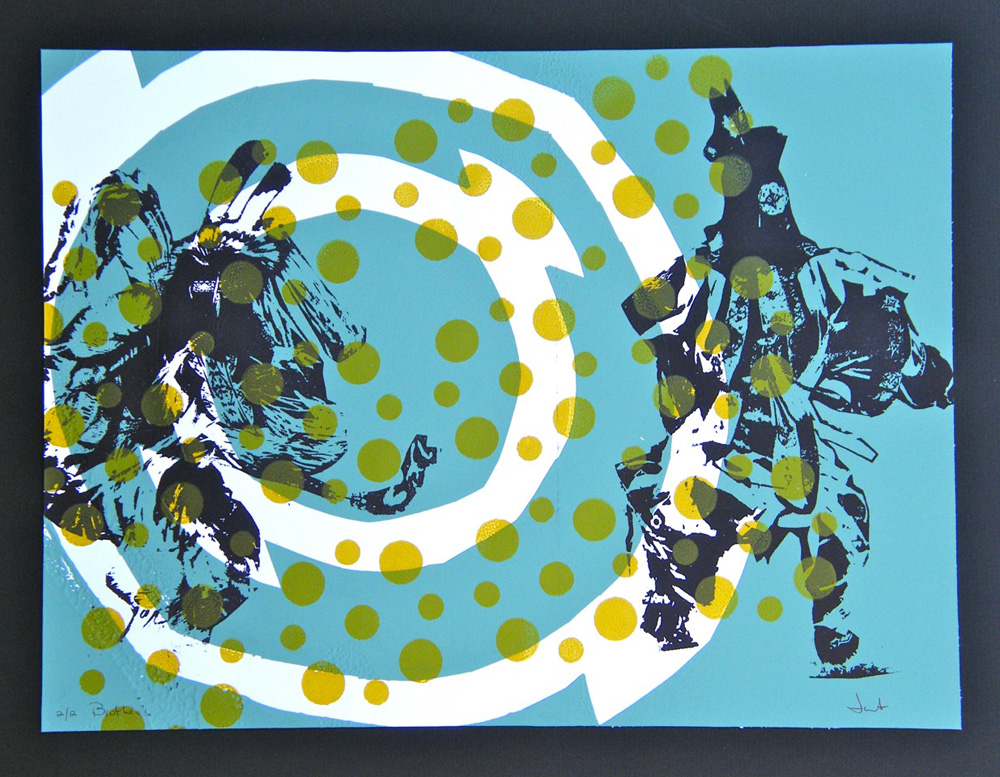 David: We believe the community-wide aspect of Pressing Through Time is significant. In our planning effort we  engaged all the museums in Taos. Their enthusiasm for our exhibitions suggests we found some common ground of compatibility and hope this new trend continues to develop.

Perhaps, as co-curators not affiliated with any institution, we were on neutral ground, easing the way for collaborations that were not considered before now.  Whatever the case, we have found enthusiasm and support in all quarters for the different venues for Pressing Through Time.  Moreover, we reached out to selected galleries who quickly began planning print shows of their own. 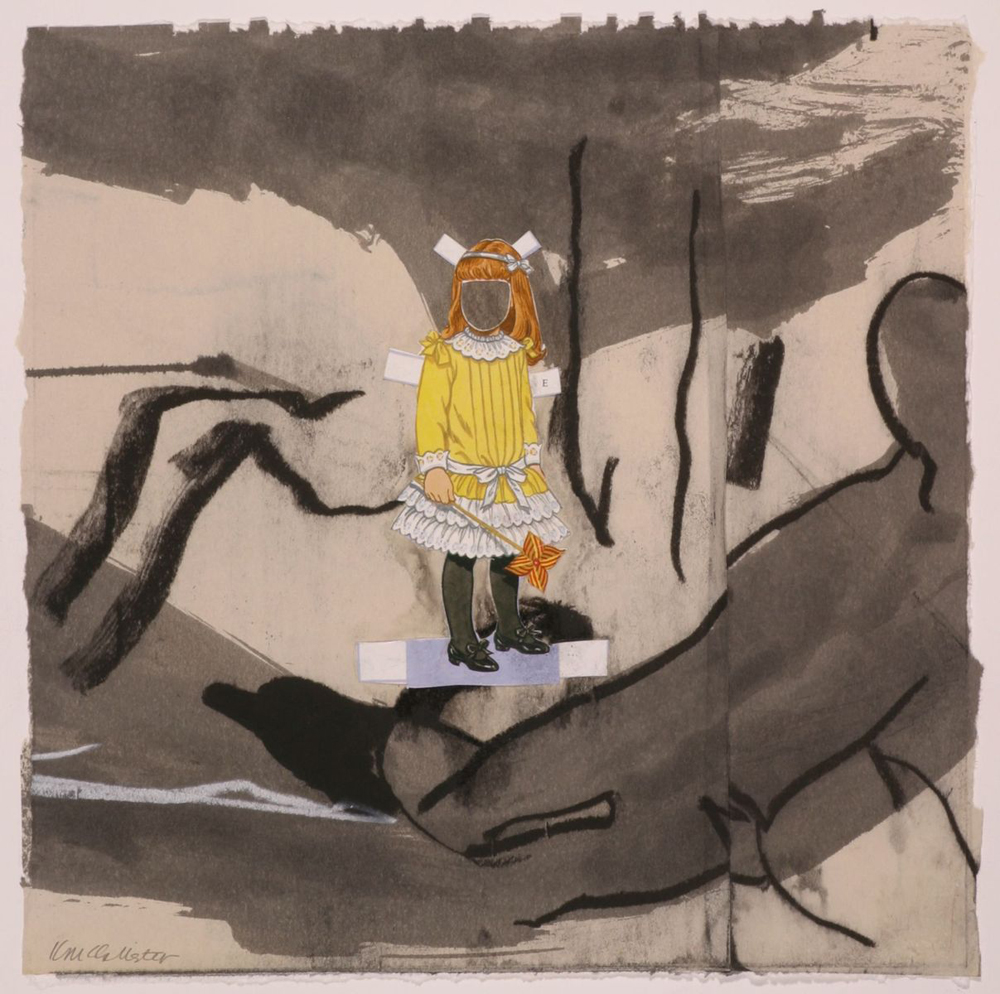 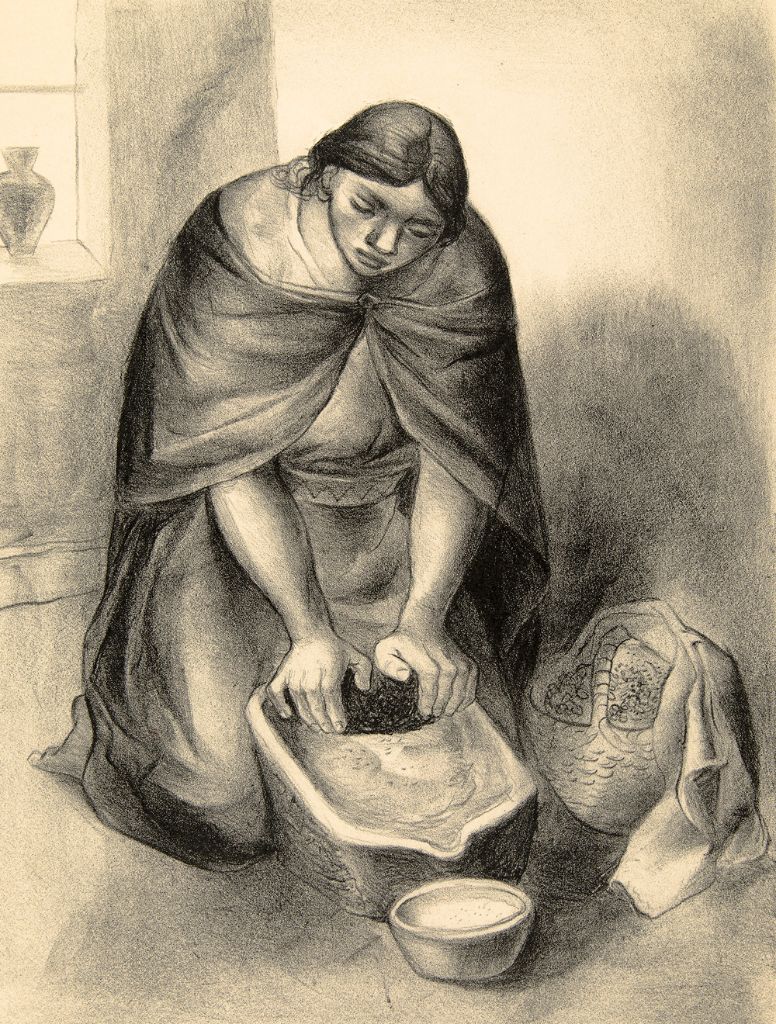 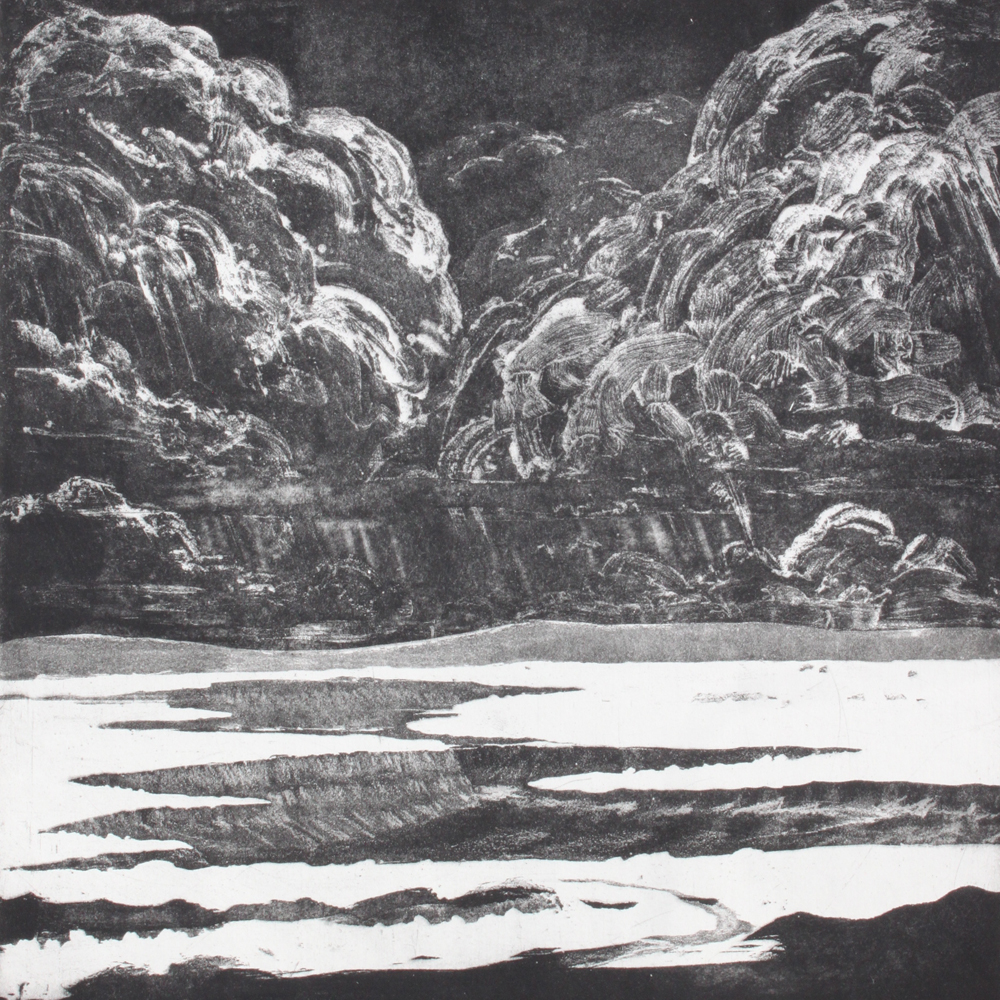 Keep up with Pressing Through Time and find more details at their beautiful (and well-updated!) website, pressingthroughtime.com.

David Farmer is a retired director of rare book libraries, a teacher, curator, photographer, and an author of articles, exhibition catalogues, and biographies of writers, printmakers, and notable figures in the world of books and collecting.

Robert Parker, an architect and teacher, is also an artist who has worked in a variety of mediums from glass through painting, to printmaking. He has served on boards of arts organizations in Canada and the United States and has curated numerous exhibitions.