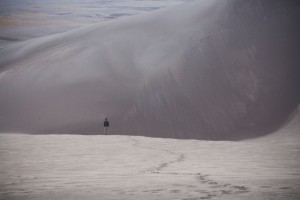 Ben at the Great Sand Dunes

Ben Link Collins, formerly of Taos, now of Atlanta, is a sound artist working primarily with field recordings and analog synthesizers. (Don’t worry if we lost you at “field recordings” — he explains it all in the interview below.)

The sounds he’s bringing to The Paseo are captured from around Taos, so this is a must-catch installment whether or not you’re interested in the art and science behind phonography (but we promise you won’t think about sound in the same way again!).

LT: Can you talk a little bit about what Paseo attendees can expect from your contribution to The Paseo? Specifically, for the Luddites in the crowd, what are “field recordings and analog synthesizers”?

Ben Link Collins: Let’s start with analog synthesizers: you may remember from yonder year, or have seen pictures of funny looking keyboards with what looks like a telephone switchboard above it that make electronic sounds.  Think Pink Floyd or David Bowie in his more “out there” moments.  Basically, an analog (as opposed to digital) synthesizer processes an electronic signal through various parameters of subtraction and addition to the original electronic signal.  All the cables and knobs on the switchboard-looking-thing act as additional controls with which you can tweak and manipulate the sound.  Everything an analog synth can do, a digital synth can do x 10 these days.  Analog synthesizers are to digital synths what records are to iPods … sort of.

A field recording can mean one of two things, specifically, but generally it means a recording outside a studio.  The phrase is often associated with ethnomusicology, or recordings made by someone who took enough of an interest in a particular musical style or culture to travel around and record particular artists or events wherein the music is taking place.  Think early blues music recorded in a dive bar in Mississippi around 1920.

The other type of field recording is phonography, which is a lot of what I do.  Phonography is like photography but with sound.  Common examples are recordings of natural environments (streams, birds, wind, etc.), trains, traffic, and crowds of people.  There are a lot of variations on this, though.  Sometimes the person recording takes an active role in the environment being recorded, and the concept of “found sound” bleeds into the composition.

The sound installation I’m doing for The Paseo, Before (Taos), would fall somewhere in the phonography realm.  Though, I’m using recordings of the natural environment around Taos as sound sources, many of which will be heavily processed.  No synths in this one.

What draws you to participate in The Paseo?

In short, I like art that can be experienced outside of the gallery or museum, that helps the public see their role as a consumer of art, differently.  Also, as a consumer, I like to be surprised by something that helps me see my environment and culture differently.  The Paseo provides opportunity to do both.

How do you feel this type of non-traditional art festival changes the dialogue about and viewer response to art (if at all)?

Non-traditional festivals are a response to the current dialogue about current art.  They are non-traditional because they pull from what is current (not past or pulling from tradition) already within the art world.  Art is something that is constantly challenged within itself, within the dialogue that makes it alive.  The viewer’s response feeds the dialogue in the same sense that one’s sense of “other” feeds their sense of “self,” and vice versa.

What’s your non-art-related hobby of choice?

I carry a digital recorder with me everywhere I go, so art is never far from me.  My initial impulse to hike and backpack doesn’t come from an impulse to make art, though.  So, hiking and camping would be my hobby of choice.

What historical figure do you most emulate, or are you most inspired by?

Albert II, the first monkey in space.  He experienced so many terrifying and wonderful things he didn’t understand.  May his parachute be eternally open.

What’s the best book you’ve read in the past year?

Here’s a link to Ben’s record label, where you can explore some of his studies in sound.

COMING TO THE PASEO? POST YOUR PHOTOS OF THE FESTIVAL WITH #LIVETAOS AND #PASEOTAOS. WE’D LOVE TO SHARE WHAT YOU SEE!