This weekend, September 14th and 15th, 2018 the PASEO project takes over the streets of Taos’ historic district. It’s the festival’s fifth anniversary and they are going big! With international artists and New Mexico’s own the PASEO 2018 will transform Kit Carson Park, Civic Plaza Drive and most definitely the insides of your brain into a fantastical landscape of light, color and sound.

One of the featured pieces at this year’s festival is an architectural installation called the Space Cloud. It’s presented by Espacio La Nube, an artist collective from Madrid, Spain. The Space Cloud is a giant inflatable pavilion that will house other installations during the PASEO. This is the Space Cloud’s debut appearance in the United States, and it promises not to disappoint. In fact, you can drive by Kit Carson Park right now and get a glimpse of it if you’d like. It’s impressive. I asked one of the members of Espacio La Nube, Hugo Cifre, to tell me more about the Space Cloud and its designers. Printed below are his answers to my questions. 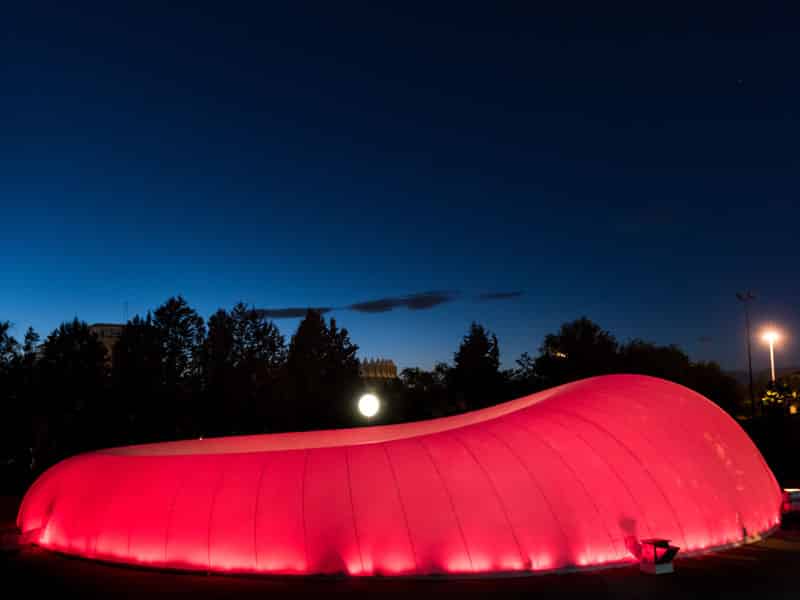 Espacio La Nube is an architectural collective. Who is involved, and how did the group come to be?

Espacio La Nube was born at the heart of a non profit students association, EASA (European Architecture Students Assembly) out of the need for a space to accommodate 250 students of architecture on very short notice. We spent some months in the basement of our architecture school designing, patterning, sewing and building the pavilion ourselves. The event was a total success. Luckily, we documented the whole process and uploaded the video to the internet. It went viral, and after a short period of time the pavilion started to receive media attention and architecture and design awards. After that, we decided to crystalize all the experience that we had acquired and started our company, Espacio La Nube SL, that we have been running for the last two years. The founders of the studio are Alvaro Gomis, Miguel Angel Maure and me, Hugo Cifre, although we have had many collaborators along the way without whose work we would not be where we are now.

You’re bringing a giant piece of inflatable architecture called the Space Cloud to take up residence in Kit Carson Park. Can you tell us what visitors to the PASEO can look forward to experiencing about this piece?

Our designs are all about playing with the sensory experience of the users and surprising them by creating an unfamiliar, unreal and oneiric atmosphere embedded into a familiar environment that they know very well, in this case Kit Carson Park. The overlapping space of those two realities is what we are interested in, and what we encourage the visitors of PASEO to explore.

I love the idea behind the impermanence of inflatable architecture. What are some of the elements that drew you to this art form?

In our case it came very naturally. We were drawn to the world of the pneumatic architecture in a situation of need because of its many obvious practical advantages, such as cost and time economization compared to other building techniques. But, we stayed because of its poetic and architectural potential. We have grown used to defining the boundaries of the spaces that we inhabit by using very massive, heavy and opaque elements, and the possibility of doing just the same with a millimeter thick membrane was just to powerful for us to ignore.

The Space Cloud is Espacio La Nube’s first appearance in the United States. Have you been to Taos before? What are you most looking forward to doing or seeing while you are here?

No, honestly we had never heard of Taos before PASEO contacted us, and other than some stop-offs while traveling to another destination this will be our first time in the U.S. We hope that you can enjoy our pavilion and the art installations that will be on site as much as I am sure we will enjoy staying in your town.

To Learn more about Espacio la nube and their work Visit thier website.

PASEO 2018 is Just ARound the Corner! For More Information about the festival, Participating ARtists or to volunteer visit https://paseoproject.org/

All Photos and Video courtesy of Espacio La Nube