THE PASEO, A FESTIVAL BRINGING THE ARTS OF INSTALLATION, PERFORMANCE, AND PROJECTION TO THE STREETS OF TAOS, IS COMING UP ON SEPTEMBER 25 & 26, FOR ITS SECOND YEAR OF CELEBRATING ‘UNHANGABLE ART.’ LIVETAOS AND KNCE ARE PARTNERING WITH THE PASEO TO BRING YOU GREAT INTERACTIVE COVERAGE BEFORE, DURING, AND AFTER THE EVENT!

THIS SERIES PROFILES SOME OF THE MANY FABULOUS ARTISTS BRINGING THE PASEO TO LIFE FOR A SECOND YEAR. 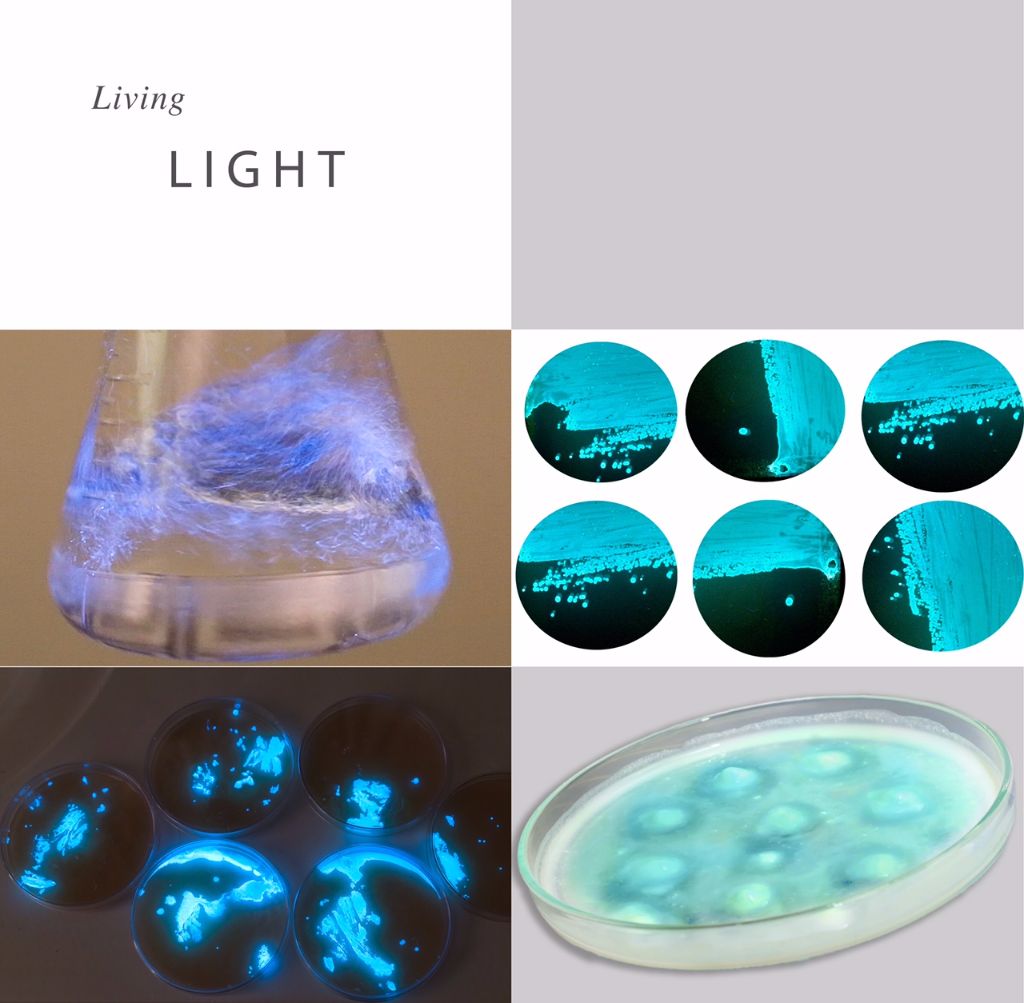 Abbey Hepner investigates the human relationship with landscape and technology. She addresses psychological motivations existing in the gray area between political extremes and morally complex subjects (she holds bachelor’s degrees in Art and Psychology from the University of Utah).  Her work on the topic of nuclear energy made her the recipient of a Puffin Foundation grant. Hepner is an internationally-exhibiting artist, recently finishing a body of work in Japan and participating in a residency and solo exhibition in Berlin, Germany. She is currently in her final year of an MFA program in photography at the University of New Mexico, and is joining us at The Paseo 2015!

We caught up with her by email to talk to her about her installation at The Paseo called Nuclear Illuminations. Here’s what she had to say:

Your installation is called Nuclear Illuminations. How did you get involved with nuclear artistic-related adventures?

I went to high school in France as a foreign exchange student. France has more nuclear plants than any other country and I became fascinated with that industrial landscape. I did a project in Germany in 2012 after the government announced that they would be decommissioning all of Germany’s nuclear plants. Shortly after that, I volunteered in Japan in the disaster zone left from the 2011 tsunami and nuclear meltdown.

I am really interested in the human relationship with landscape and technology and my work investigates the use of health as currency. I frequently find myself in places with a lot of nuclear history, like New Mexico, and the industry has become a metaphor for many other issues that I continue to investigate in my life. 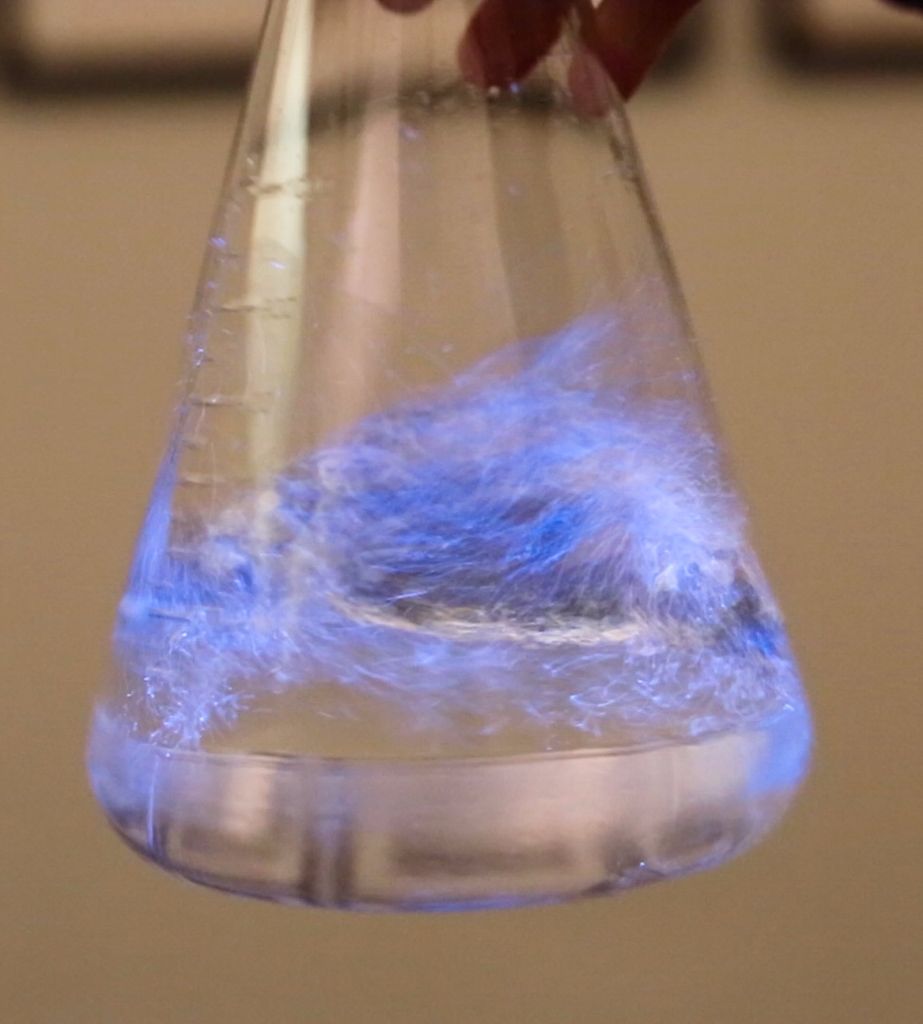 How are algae related? So fascinating!

Large quantities of radionuclides have leaked from the Fukushima Daiichi Nuclear Power Plant into the environment and cleanup efforts are important to reduce continued radiation exposure. After the Fukushima accident, scientists had discovered green microalgae, Parachlorella sp. Binos, in the waters around the plant. This strain of algae has the ability to accumulate radioactive nuclides including iodine, strontium and cesium, from water and soil in the heavily contaminated area in Fukushima. Algae may be one of nature’s ways of remediating the damage that has been caused by the nuclear disaster. I was so fascinated by this discovery that I started to study it and grow some myself. I eventually started to work with bioluminescent algae and research how scientists and designers are using as an alternative source of light.

Tell us more about this work. How will people interact with it?

Nuclear Illuminations is a series of biological street lamps. One street lamp is made with bioluminescent algae and two path lights are made with bioluminescent bacteria. The lamps have servos in them and they are connected to microcontrollers that are activated when nuclear-related keywords appear on Google and Twitter. The bioluminescent organisms will illuminate when the microcontrollers trigger the servos and the liquid is agitated. Viewers will see the biolights illuminate when the online conversations are active and they can also participate in the conversation on twitter and see the result in real-time. 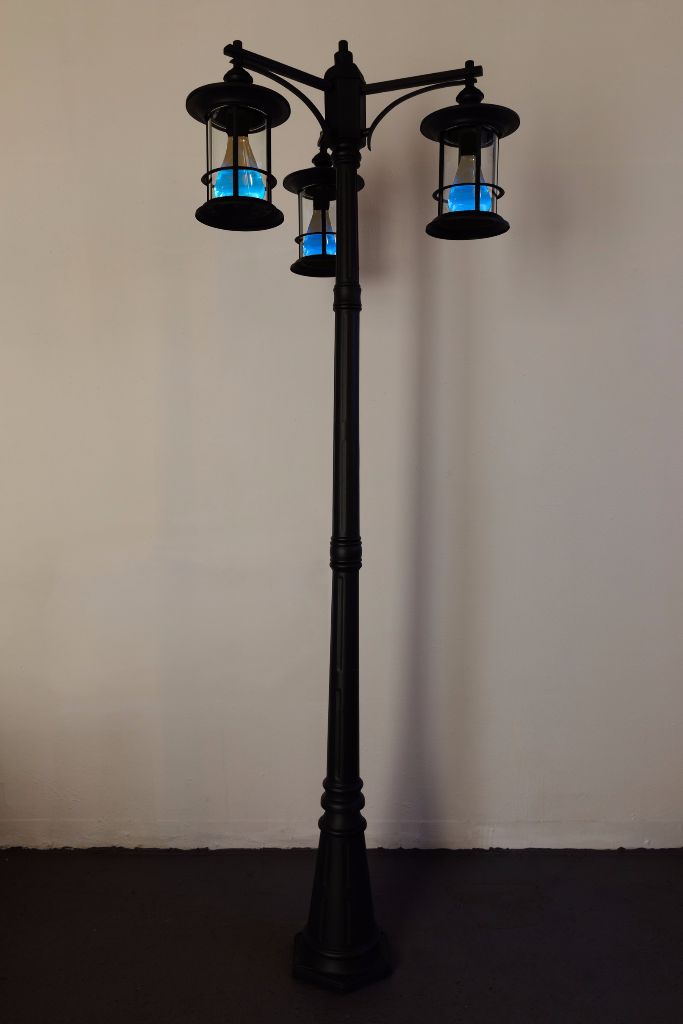 Who or what inspired this piece? If others are inspired by your work, where should they go look for more information?

When I moved to New Mexico from Japan, I felt really disconnected from the continuing conversations about the disaster. I wanted to keep informed about cleanup efforts in Japan but also to stay aware of nuclear energy issues in the United States as well. The U.S. is currently in the nuclear renaissance, with two new nuclear energy reactors being built in Georgia, the first to be built in 30 years. This is a very important time to be asking questions about the future of energy and major news media are lacking when it comes to informing the public. Google and Twitter provide links to conversations that are happening globally and they remind me that, while it may be quiet here, there are many people as concerned with these issues as I am.

The lamps connect a source of biological remediation to virtual conversations and I am suggesting that information, transparency, and concern are their own source of remediation. It is through asking questions and communicating that we become more informed and hopefully engage in movements to restore the damage that has been caused. Sitting with the biolamps in the dark and watching them turn on and off also reminds me of my own dependence on electricity and suggests the potential for biolights in the future.

More of my work can be found on www.AbbeyHepnerFineArt.com, and there are many projects by scientists and designers who are working with bioluminescent technology that can be found elsewhere online. Dutch designer Daan Roosegaarde is investigating bioluminescent bacteria that, when their light producing compounds merge with plants, might be able to turn trees into glowing street lights. www.studioroosegaarde.net 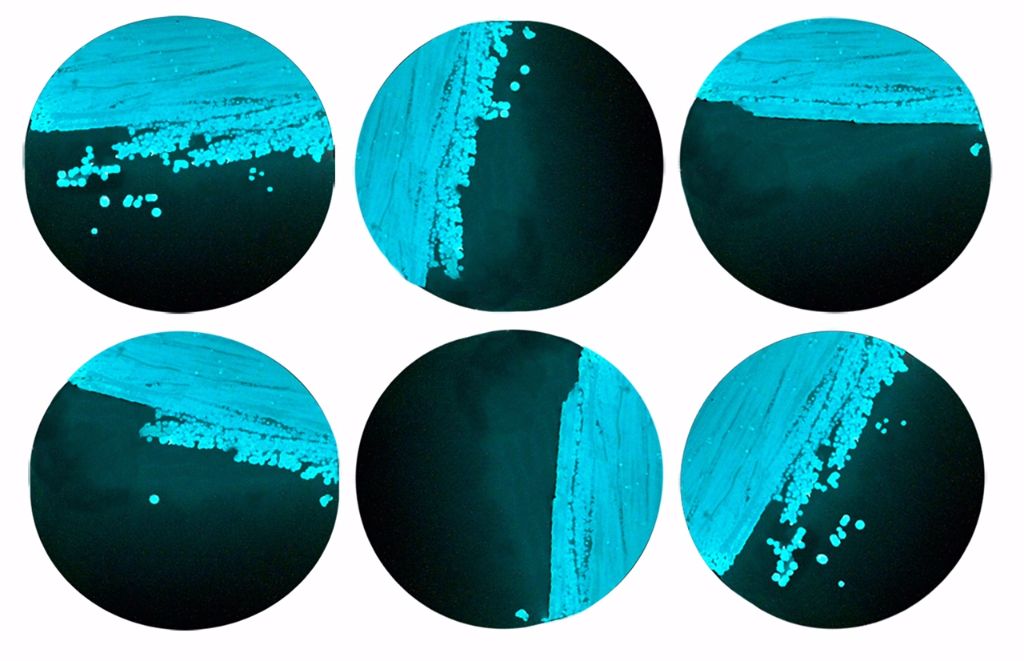 Your work is quite diverse, how does this installation diverge or integrate with your other work?

My primary artistic mediums are electronic art and photography. They are both tools in which I investigate the human relationship with the landscape and technology but they also speak to my fascination with light and electricity. I’ve worked with biological materials before, such as a series I did with Uranotypes, an archaic photographic process that uses the radioactive element uranium instead of silver in a photographic print.

Bioluminescent algae and bacteria are other biological organisms that deal with light and energy in an interesting way. It took a year of trial and error to learn how to successfully grow bioluminescent algae and bacteria. There is a lot of patience required to work with living organisms that need strict environmental conditions and don’t always perform when you want them to. The reward is witnessing a phenomenon created by nature and sometimes nature make the most beautiful art.

What is exciting for you about being at The Paseo?

I am really excited to be a part of The Paseo and exhibit alongside some incredible artists. Artists put a lot of work into a project that will only be exhibited for two days, and that is really valuable because what we are offering is unique and experiential. My collaborator Jason Hullinger from Los Angeles is the brain behind the software that we are using to communicate between the lamps and the virtual world, and he will be working with me in Taos. 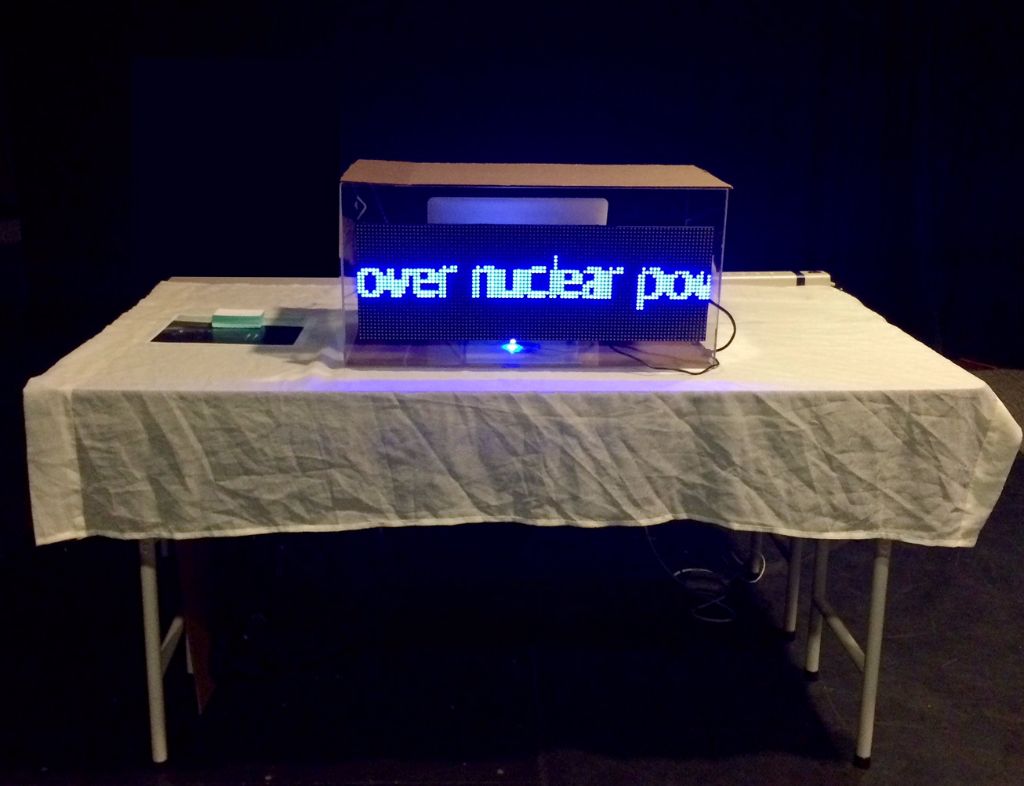