For a town full of great musicians, Taos doesn’t really have much of a blues scene. Jackson Price aims to change this with a new weekly blues night at the Taos Mesa Brewing Company. Jackson, who usually fronts The Big Swing Theory, is branching out to establish this new event in Taos, which will feature a rotating cast of New Mexico musicians in an organic, “mostly un-rehearsed” blues jam. This “bound to be epic” WEEKLY get-together starts on Wednesday July 3rd from 5-7.

Jackson has spent the last ten years, many of which were spent in Los Angeles playing in the Mighty Mojo Prophets, developing his chops on blues guitar. He loved the rich music scene in LA, and was shocked to find out that Taos, rich with talented musicians, lacked the blues community he was used to. This Wednesday Blues Night is merely the prelude to what he is calling the Taos Blues Club. 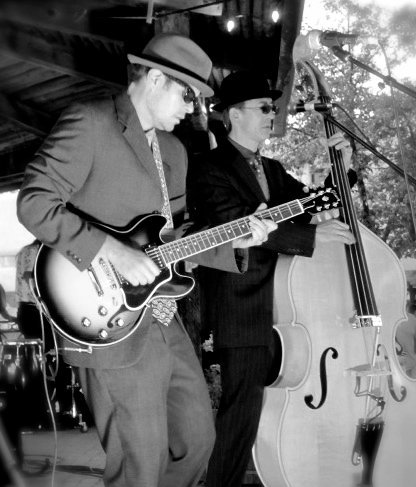 The current lineup includes Jackson on guitar, Conrad Cooper on stand-up bass, Thomas Ziccarello on drums, and a fourth spot that will rotate out with different musicians each night for the first month. Wednesday July 3rd and July 10th are both going to feature John Carey, a phenomenal blues harmonica player from Santa Fe. This is going to be a fantastic start for the Taos Blues night!

Jackson is going to be the only permanent member and, for now, the rest of the stage will be invite only. If it gets established and starts to draw more talent from the area, it could become a great blues free-for-all more along the lines of Santa Fe’s classic blues get together.

Do you think you have the chops to join the blues jam? Show up some Wednesday night soon and talk to Jackson.

The is a FREE event hosted by the Taos Mesa Brewing Company, and will be set up on their new outside stage just off the patio. They host a happy hour in the evening, so there will be drink and food specials. This sounds like a fantastic excuse to enjoy the epic views, drink a few excellent brews, and listen to some killer Taos blues jams.

WHEN: Every Wednesday Night, 5pm – 7pm
WHERE: Taos Mesa Brewing