Music is as universal to humanity as language, and may even be a much older form of communication in our evolution as conscious social beings. Through time as people have become less isolated culturally and geographically, the first means of communication is through music. Music helps people relate to each other and changes minds in ways that words never can. Just imagine: it has been suggested that jazz and the Beatles had more to do with bringing down the Iron Curtain than nuclear threats.

With the current state of internet technology we can all hear and see the same thing at the same time. The cultural and geographical barriers which separated us in the past are dissolving, and we are on the verge of a new world with a global culture and a common musical language. Tune In Tokyo — Taos Calling, a radio show which I host on KNCE 93.5, focuses on music coming out of Japan, Korea, and Asia in general, but it is not separate or in isolation. Though filtered through its unique cultural voice, it is adding to a global musical chorus. There is nothing wrong with protecting traditional forms of music to keep them pure; museums and societies are created for that purpose. It can inspire and create a sense of belonging, but tradition without the breath of life can become a corpse on the creative mind of the living. Maintaining a balance with an understanding of and respect for the past but still having a vision of the future is the job of the contemporary artist. The music of composer Marty Regan in so many ways respects and represents this balance.

In 2009 Marty was approached by Duo YUMENO – a husband-wife ensemble composed of a koto (Japanese 13-string zither) and violoncello – who asked if he would be interested in composing a suite of duets over the course of four years, based on the Japanese aesthetic concept of ka-cho-fu-getsu/Flowers, Birds, Wind, Moon, core images of nature that recur throughout Japanese literature and the arts. Taoseños have a rare opportunity to hear this major piece of contemporary music, rich in tradition yet expansive in form. The music will be performed on traditional Japanese instruments, of which Marty is an internationally-recognized expert, including koto, shakuhachi (end-blown Japanese bamboo flute), violoncello, and voice. While each of these four works have a distinctive character, there is one unifying element that truly binds them together. They were composed with the intention of giving Yoko and Hikaru an opportunity to engage in a poetic dialogue with each other. Commissioned by Duo YUMENO, this performance will mark the New Mexico premiere of this extended work. Listening to the works myself on CD, I was struck by how well the two musical traditions merge to form a totally unified and unique harmony of sound. It is a performance not to be missed by anyone who appreciates global musical traditions.

Marty Regan is an Associate Professor of Music at Texas A&M University, currently residing in Taos for the summer under the auspices of a Helene Wurlitzer Artist Residency Grant. Marty Regan has composed over 70 works for traditional Japanese instruments and since 2002 has been affiliated with AURA-J, one of Japan’s premiere performance ensembles of contemporary-traditional Japanese music. He spent many years living in Japan has devoted the last 15 years of his life to developing contemporary repertoire for traditional Japanese instruments. He completed his Ph.D. in music with an emphasis in composition at the University of Hawaii, Manoa in 2006. One of his newest works, a chamber opera entitled “The Memory Stone,” was commissioned by the Houston Grand Opera as part of the HGCOco’s Songs of Houston: East + West initiative and was premiered in April 2013 at the Asia Society Texas Center. This fall, he will be residing in the UK as a Clare Hall Visiting Research Fellow at Cambridge University. On August 9, Marty Regan will be presenting a concert of his musical works for traditional Japanese instruments at the Mabel Dodge House in collaboration with Duo YUMENO. 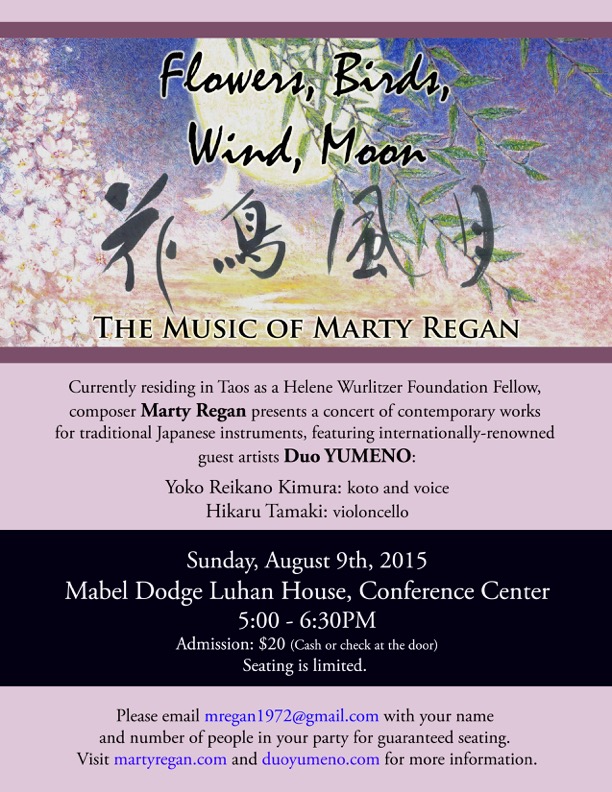 Duo YUMENO, New York based koto / shamisen player and singer Yoko Reikano Kimura and cellist Hikaru Tamaki create a singular fusion of sound, inspired by tradition but with a contemporary sensibility. Duo YUMENO’s repertoire includes a dynamic range of compositions, all of which explore the dialogue between classical Japanese and western music. Kimura and Tamaki first collaborated at the Fort Wayne Cherry Blossom Festival in 2008 and since then have been performing together regularly in Japan and the US. Their performances have been enthusiastically received in Tokyo, Kyoto, New York, Chicago and throughout the US. They were also invited to perform in Turkey and visited Trinidad to be featured at the opening concert of “Japan – CARICOM Friendship Year 2014,” an event promoted by the Japan Foundation, NY and co-organized by the Embassy of Japan in Trinidad and Tobago. In 2014, they were awarded the Chamber Music America Classical Commissioning Program grant, and in 2015, received the Baroque Saal Award given by the Aoyama Foundation in Kyoto. Their activities have been featured in the New York Times, Yomiuri Times, Hōgaku Journal, and NPR.

Yoko Reikano Kimura, who plays koto and shamisen, has been touted as “superb” by the New York Times. Born and raised in Japan, Yoko started piano from age four but took an interest in many types of music. Her academic and musical background is extensive. Yoko has won numerous awards including first prize at the prestigious 10th Kenjun Memorial National Koto Competition as well as the 4th Great Wall International Music Competition. Yoko current holds a teaching position at the Institute for Contemporary-Traditional Japanese Music at Senzoku Gakuen College of Music in Kawasaki, Kanagawa, Japan. She has performed concerts extensively throughout Japan, the US, Europe, Asia, Middle East and South America. As a koto and shamisen soloist she has performed with numerous string quartets, ensembles and orchestras.

Cellist Hikaru Tamaki performs regularly as a soloist and chamber musician. He served as the principal cellist of the Fort Wayne Philharmonic, was a member of the Freidmann String Quartet and was an associate principal cellist of the Chicago Civic Orchestra. He was rewarded a bachelor of Arts degree from Rice University and a master of music degree from Northwestern University, where his teachers were Paul Katz and Hans Jorgen Jensen. Hikaru was a prizewinner in the prestigious All Japan Viva Hall Cello Competition.

Coming up on Tune In Tokyo-Taos Calling

Marty was very surprised when he learned that here in Taos, New Mexico there was a local radio program dedicated to Japanese traditional and contemporary music. When he contacted me to tell me about the upcoming event, I was surprised by the coincidence that I was intending on doing my next installment of Tune In Tokyo – Taos Calling on Traditional Japanese music and how it has evolved in the contemporary world. I asked him if he could come on to my show to discuss it and talk about his work, and he agreed to the idea.

This Saturday, August 1 from 4-6 PM on Tune In Tokyo – Taos Calling, Marty will be joining me on air to discuss music from an Eastern and Western perspective. We will be commenting on a wide range of traditional and contemporary Japanese music from Kabuki to Kiryu and how music evolves and migrates between cultures in the modern age. Then, the following Saturday, August 8 from 4-6 PM, Marty, Yoko Reikano Kimura and Hikaru Tamaki will be on the air listening to and discussing some of the compositions that will be performed the following day, Sunday, August 9, 5:00-6:30PM at the Mabel Dodge Luhan House, Conference Center.  These shows will be podcasted and available to be heard anytime after the broadcast. For more information check the links below.

on Sunday, August 9, 5:00-6:30PM
Admission: $20 (cash or check at the door)
NOTE: Seating is limited to 60 guests. Please email [email protected] with your name and number of people in your party for guaranteed seating.