Every small town deserves a grungy alternative scene. Whatever your social status, the demographics of your town, the number of churches, or the number of vacation homes, I guarantee a scene exists. Over the last 17 years, I have witnessed this scene surface and fade away like the cycles in clipped audio waves that emit from the speakers at a good hardcore show. When we are on the upswing of that wave, riding in a roller coaster car full of leather, knives, piercings, metal studs, dyed hair, hip flasks, crotch blades, dudes asleep by the fire before the first band starts, and singers who growl into an already clipping PA system … I’ll be happily bobbing my head from the back row.

It’s nice being the human equivalent of a mullet, business up front, party in back. Most of the time I look like I should be at a high-end art opening, enjoying the James Taylor playing at a comfortable level in the background, sipping wine, and asking the painter why they chose puce instead of maroon. I may run a tight ship when it comes to my business life, and most of my music life, but I strongly believe that everyone deserves an outlet. All music is good and should be appreciated for what it means to its audience. Even though I’m usually playing blues or folk to audiences at local bars, I’ll never give up standing at the back of the room full of heathens while bands loud enough to vibrate the nerdy glasses off my face electrify the audience into a flailing frenzy of limbs and bombs of sweat. 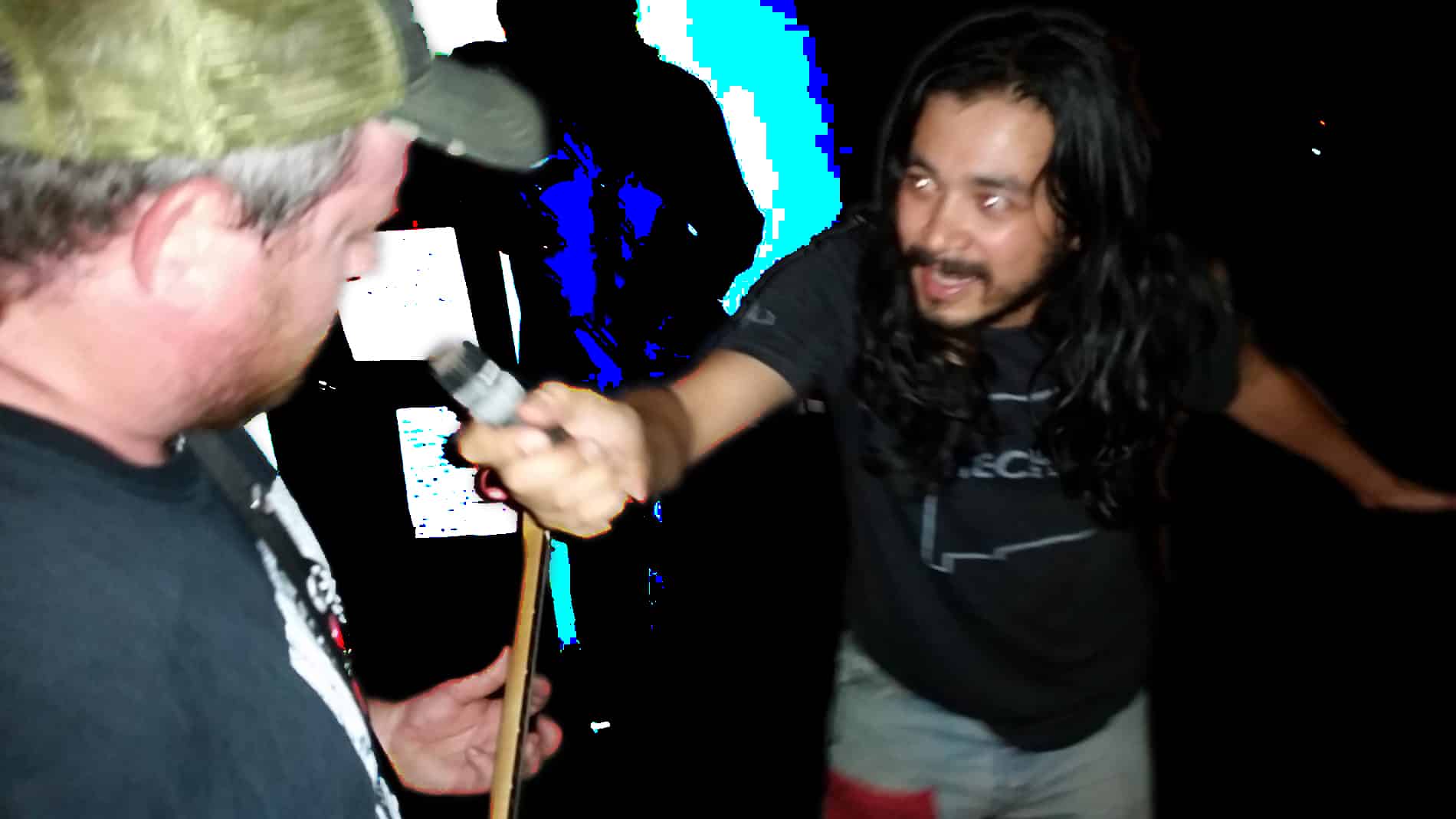 No mic stand night at the Crust Mansion

Three years ago, the alternative scene thrived at an old adobe house in a residential area, with tons of vacation homes, lovingly dubbed “The Crust Mansion.” I played some of my favorite shows in that old living room. Amazingly it survived the multiple visits by authorities and complaining neighbors. Shows were always well attended and thoroughly intoxicated. It never felt out of control; no one was ever seriously injured, and I only witnessed a handful of fights — frankly, I’ve seen more fights at local bars than at punk rock shows. Alcohol is probably the issue, not the studded jackets, or abrasive attitudes. I can’t say nothing was harmed. I still have a box of mic cables that reeks of energy and sweat from the Crust Mansion. The smell slams me right back into one of the few vibrant alternative music scenes Taos has had in the last decade. A scene like that has a short lifespan, usually due to the expiration of a landlord’s understanding, excessive authoritative visits, or simply the fact that hosting a scene can fry even the sturdiest of punk rockers.

After the Crust Mansion, the alternative scene experienced a great depression. I don’t mean to be overly dramatic with the term ‘great,’ but every time there is a depression in the roller coaster ride of alternative music, it is a great depression. It’s critical for society to let alternative scenes thrive. Luckily, thanks to the POTUS’s incredible leadership, the alternative scene is experiencing new market growth. “Vagrant Heart” is a new alternative space that occupies the building that was the thrift store Pieces Too. I had multiple conversations throughout the evening that included nostalgic remarks about ”where the suitcases used to be” or how “the ski rack overflowing with ’70s-era equipment was right where the drums are set up.” Punk rock only goes so deep, and everyone loves a good thrift store. 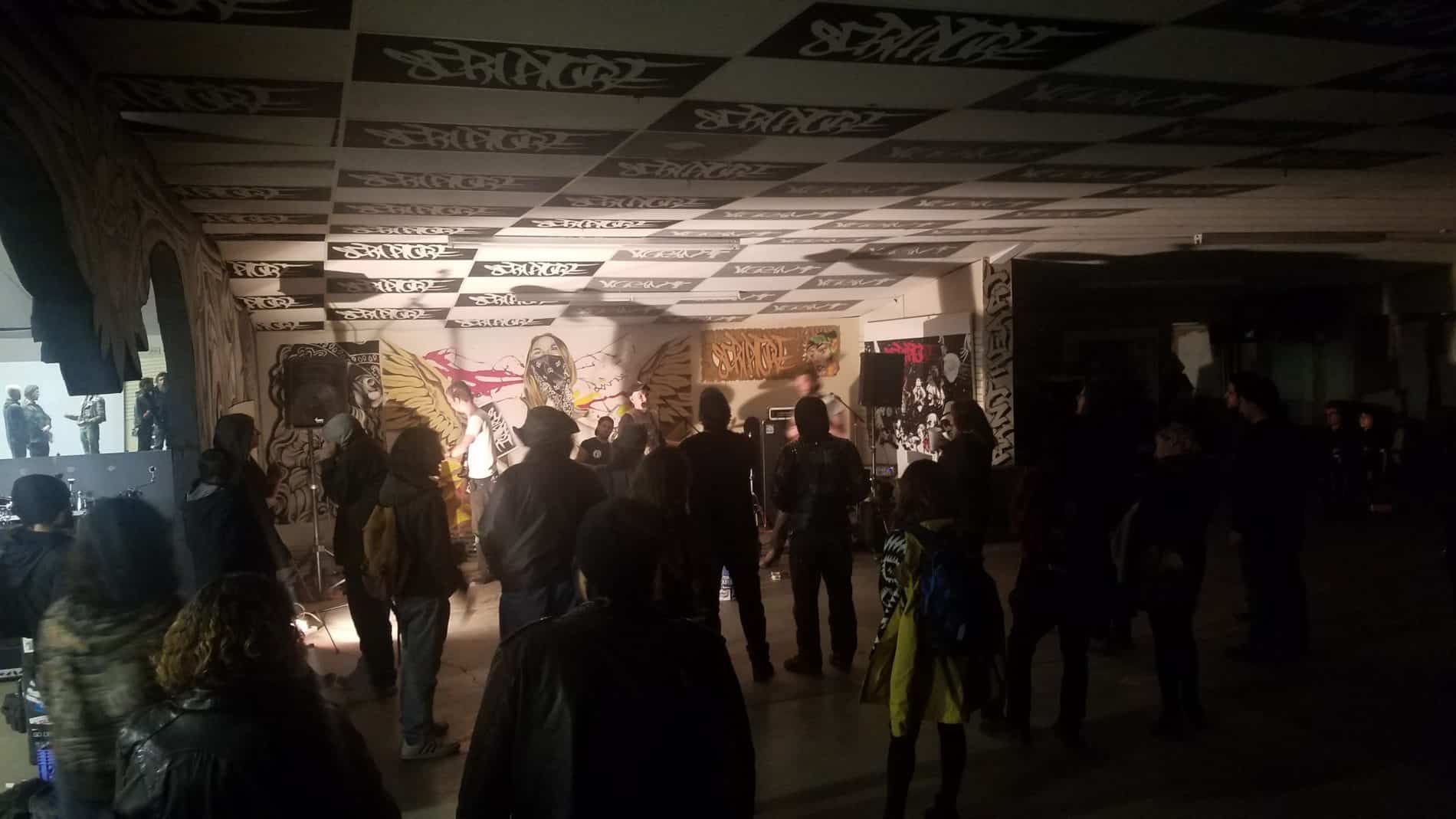 Vagrant Heart’s opening show was invigorating and motivating. In good Taos fashion, I showed up too late to see the first two acts. Spin Move (a local trance-inducing, jammy, kind-of-math-rock, mostly-just-Boon-looking-awesome band) reformed and sounded rough from not rehearsing in two years, but still, let loose. Desmadre from Española brought out some classic Northern New Mexico metal with its appropriate-looking guitars, and one of my favorite lead singers in all of New Mexico. Dysphotic, a black metal band from Santa Fe, were a wall of amps, a tight drummer, and an energetic screamer. Exactly what you want from black metal. And Taos’ own Article 15 is tighter than ever and shredded the night to an end with a rowdy crowd that ACTUALLY STUCK AROUND.

I got really close to leaving before Dysphotic, but their professional attitudes and equipment piqued the business side of my ‘human mullet’ interests enough to stick around long enough to get drawn into their incredibly tight set. The red lights and fog machine helped set the dark mood for a band made up of nice smiles and gracious attitudes. The drummer, who has been the beat for many heavy bands from Santa Fe, held them down like a rock. Dysphotic could shake the boredom out of the laziest of teens if those teens could stop watching Ed Sheeran videos, get out of the house, and go to a heavy show. The room is big enough to put some space in between you and the bands, if you are into that kind of thing.

The beauty of Taos is that even amidst a sea of armpit stench, dreadlocks, and studded jackets, a recently showered, clean-cut, A-student-fresh-from-college on Christmas break, who probably doesn’t know what being bad is, can hop around like a happy pony during the heaviest set of the night, and no one will blink an eye. 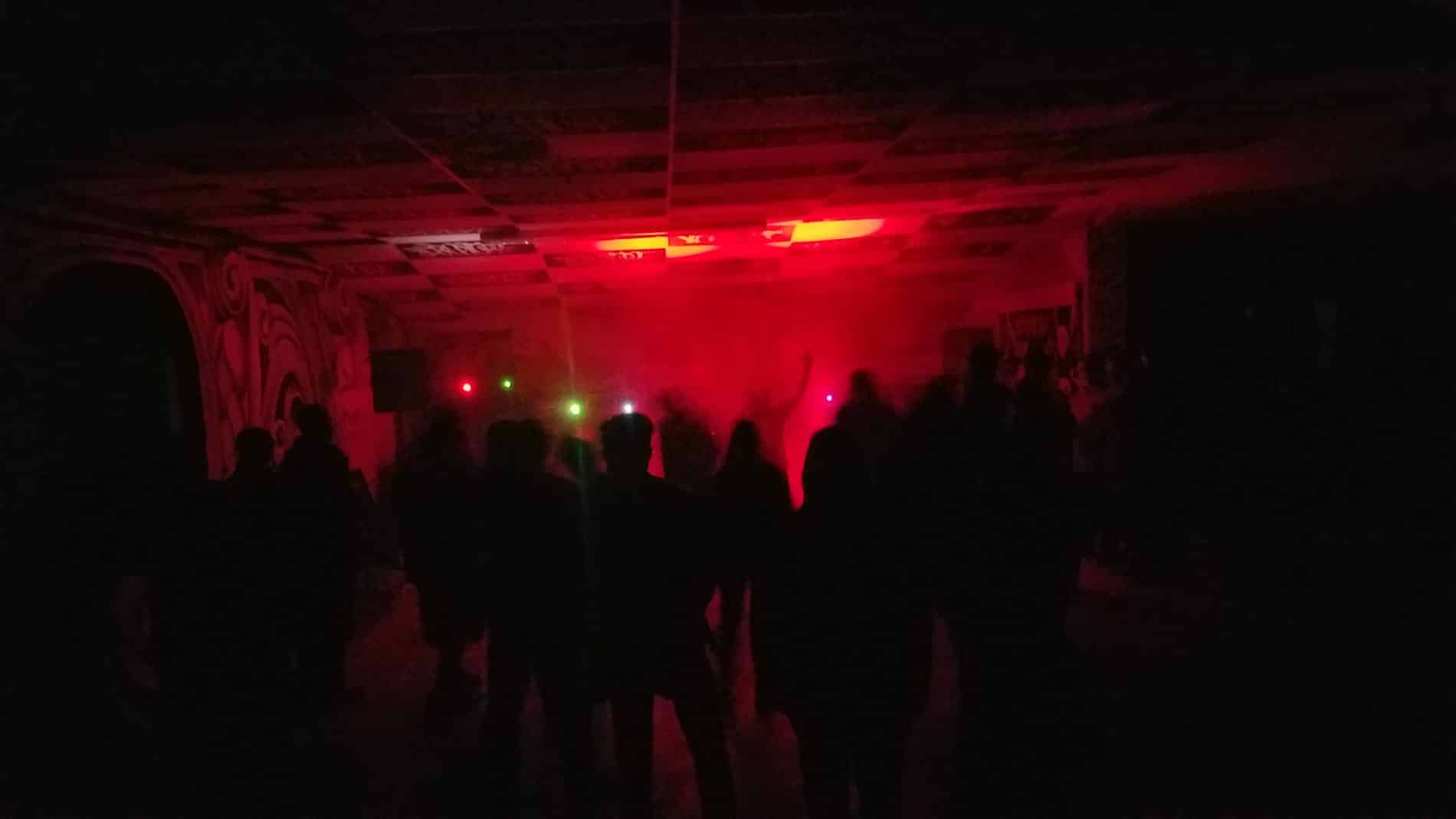 Vagrant Heart reminded me of how much I miss the high-energy careless enjoyment that underground alternative music brings to anyone open enough to enjoy it. I shared a space at the back of the crowd with Ryan ‘The Looper’ Beckwith (of Katy P and Business and Ryan Nobody); we started off the night by comparing earplugs. We both play around town regularly in different bands enough to make music far too professional. We appreciated the fact that nobody turned their amps on standby before plugging in their guitars, causing a soul-fulfilling crunch; drummers who played as loud as they wanted (sometimes being drowned out by bass amps); you couldn’t hear a damn thing the singers were saying; there didn’t appear to be anyone ‘managing the stage;’ and no shits were given. We both waxed nostalgic about how much we miss not giving a shit and playing loud. Underground shows are not about a finessed well-tuned sound system, and they do not suffer from sound checks that involve the singer screaming while playing his guitar at full volume without actually adjusting anything.

Hell yeah Vagrant Heart. For as long as you rage, there will be an audience.

Here is my advice to you, reader: pump up the James Taylor in your car on the way to the next show at Vagrant Heart, put some fucking earplugs in, and see how the other side lives. This world needs more understanding. You might find yourself drawn to the frenzy of the mosh pit. Don’t worry, we won’t tell your grandma. It is Taos though, abuela may already be in the mosh pit.